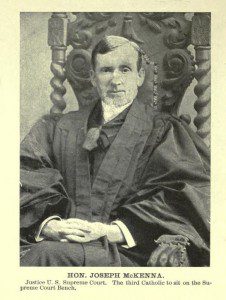 Joseph McKenna was one of the few politicians to have served in all three branches of the Federal Government: as a Congressman, as a U.S. Attorney General, and as a Supreme Court Justice. The son of Irish immigrants, he was born in Philadelphia, where he attended what is now St. Joseph’s University. After moving to California, he was admitted to the bar at age 22 in 1865. There he served as a District Attorney for Solano County and from 1875 to 1877 he served in the California State Assembly. In 1885, he was elected to the United States Congress, serving four terms. President Benjamin Harrison appointed him a Judge in 1892. Five years later, President William McKinley appointed McKenna Attorney General in his Cabinet. The following year he was appointed to the United States Supreme Court, from which he resigned in 1925 after having a stroke. He died on November 21, 1926, and was buried in Washington, D.C.’s Mount Olivet Cemetery, the largest Catholic cemetery in the District. McKenna was one of thirteen Catholic Justices in the history of the Supreme Court.

July 14, 2014 Catholics on Stage: Fritz Williams (1865-1930)
Recent Comments
0 | Leave a Comment
"Wow! I didn't know about that Statement from the US Bishops. The fact that they ..."
Florence Ziegler “It’s About Time They Got Here”:  Catholics ..."
"Very interesting. Why did the Jesuits change the name of the school from a saint's ..."
Kristin Nealon Wilson Ocds Who’s Buried in Catholic Cemeteries?
"It is a joy to that you are back blogging. Thanks for the reference to ..."
Joe A Church Historian’s First Communion
"Thank you for all your enjoyable, informative posts on Church history. I agree that the ..."
Kathleen Brady Looking at the Scandals– A Church ..."
Browse Our Archives
get the latest from
Catholic
Sign up for our newsletter
POPULAR AT PATHEOS Catholic
1