My bishop whoops when she preaches

My bishop whoops when she preaches June 19, 2017 Morgan Guyton

I just got back from my home annual conference of Virginia. We’ve got a new bishop named Sharma Lewis. She’s black and she whoops when she preaches. She runs around the room and she stands on chairs. She makes us repeat words back to her. She tells the youth to shout to her from the crowd. I don’t know what to do with it. I imagine that many other white United Methodists in Virginia don’t know what to do with it either. And I think that’s what God had in mind.

I inhabit two realities. You might call them the world and the kingdom. Most of the time I live in the world where my basic framework for interpreting reality is cynical. I’m too smart to fall for what’s going on around me because I know (or at least have all kinds of speculative thoughts about) what’s really going on. I know that the people on the stage are just posturing and building hype to try to manufacture a goose bumpy experience so that the people in the crowd will put the most money in the plate possible. I know that anytime someone attributes church growth to the “Holy Spirit,” there’s a real sociological reason underneath the surface and it probably has something to do with white middle-class consumerism. I know that progressive white guys like me gush over black woman preachers and make them our mammies.

But the moments of life when I’m in the kingdom, everything looks different. I speak with an eager earnestness that cynical Morgan would roll his eyes at. I jump up out of my seat to receive healing at the altar. Sometimes I even raise my hands during a praise song which is absolute anathema to cynical Morgan. Sometimes I talk to God in a spiritual language that is too emphatic for human words. When I stumble into the kingdom, I wonder why I can’t spend my whole life in that place. I feel like Peter when he said, “Lord, it’s good to be here; can we build three shelters for you and Moses and Elijah?”

When I was first listening to Bishop Lewis preach yesterday, I was processing her through my worldly cynical frame. I noticed that she only quoted white evangelical men, including John Maxwell, whose church leadership empire is the Death Star to my X Wing fighter. Why couldn’t she drop some bombs from Wil Gafney or James Cone or Pamela Lightsey? Then she said the phrase “eternal damnation” and didn’t immediately qualify it with all the nuances that I like to put on any description of hell. She didn’t say as many catchphrases as I wanted to hear about my social justice issues.

Her quadrennial vision for our conference is to create “life-long learners who influence others to serve.” When I first saw it, I wanted to critique it in my brain. It seemed kind of vanilla. I struggle with the word “serve” because serving others so often turns into feel-good yuppie voluntourism that doesn’t address systemic evils and my mind immediately wants to retort justice, not charity.

But then she stood up on a chair and started shouting for the youth to call out responses to her one at a time. And I realized God wasn’t going to let me be a cynic. It was like a demon got cast out of me and a tractor beam started pulling me into the kingdom. Because all I could see was that she was all in. She was being “vile” in the way that John Wesley impishly used the word. And something inside of me got fired up seeing how fired up she was.

It was like we say in Alcoholics Anonymous: she’s got something that I want so I need to follow her to find out how to get it. And I was like, I don’t care what the words of our vision statement are; she’s standing on a chair. It was like she was a living representation of the best-titled country song of all time, “Dropkick me Jesus through the goal posts of life.”

It wasn’t until many hours later that I realized how brilliantly she had exegeted her congregation and how subversive her vision statement was. She had gone around the state to do 32 “chat-and-chew” listening sessions with people, and her vision statement was the product of these sessions. So it really was our vision as Virginia United Methodists: the product of God speaking to her through the people who had chatted and chewed with her.

The thing that’s so perfect about the vision statement is it articulates what can be very intimidating work in the most non-intimidating way possible. “Lifelong learning” is such a non-threatening way to pose a very serious discipleship challenge to the United Methodists of Virginia. It means both that nobody is ever done and it’s never too late to start. So it’s inviting us in a very positive way to do something about a major problem we have: most United Methodists in Virginia barely make an hour of time for God each week and are not proactively seeking to grow as disciples.

Likewise, “influence” is an un-scary way to talk about evangelism. She had the youth, the women, and the men in the room shout out to her where their “spheres of influences” were (soccer teams, nail salons, barbershops, etc) in order to help us recognize that we have spaces in our lives where we could be sharing the gospel.

And the evangelism in the mission statement is not a “Do you know where you’re going after you die?” canned speech. It’s “influencing others to serve,” so an invitation to join our movement beginning with the good that we do in the community. Now the sneaky thing about influencing others to serve is you have to be serving already in order to do so. So churches need to get out in their communities in order to find ways to be of service so that they can invite others to join in that service. It’s a gentle, backhanded way of making us missional. And through serving together, we see Jesus together, and he can take it from there.

The goal Bishop Lewis has established for Virginia is for every church to have a clear discipleship process by 2020, along the lines of Thomas Rainer’s Simple Church. As I was driving to my parents’ house from conference, my head was swimming with thoughts about how to do better discipleship at NOLA Wesley (in other words, her sermon did exactly what it was supposed to do). For the first three years, we’ve been mostly focused on building a functional community. It’s time for us to go deeper. I know that the theme for fall semester is going to be “Living in the kingdom.” I haven’t mapped out the weeks yet. But I’ve been keeping a secret from my students that it’s time to let out. God’s kingdom is real and spending even a minute inside it can change everything.

When I came to Virginia’s annual conference last Thursday, all I was thinking about was my ministry’s funding crisis. Now all I’m thinking about is my bishop who stood on a chair and invited me to be a disciple.

Help us reach our goal of 100 monthly patrons for our campus ministry NOLA Wesley! 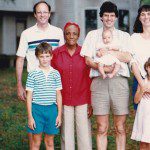 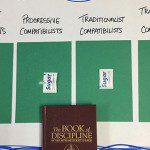 June 20, 2017 I want to be a compatibilist when I grow up
Recent Comments
0 | Leave a Comment
"Message from 2021: you had nailed it"
Spirit Plumber Why Did Patheos Evangelical Push Out ..."
"Or it could just be a prophetic reading appropriate to our context. I probably could ..."
Morgan Guyton Why Does The Knowledge of Good ..."
"Uhm...yeah. Your speculations all depend on the authors of Genesis being brilliant and subtle and ..."
Sporkfighter Why Does The Knowledge of Good ..."
"Christianity would be much healthier if it had based its operating premise on Augustine's "but ..."
alwayspuzzled On Getting Banned From A White ..."
Browse Our Archives
get the latest updates from
Mercy Not Sacrifice
and the Patheos
Progressive Christian
Channel
POPULAR AT PATHEOS Progressive Christian
1