A year ago CAIR-NY Civil Rights Manager Cyrus McGoldrick, who was conducting twice weekly “Know Your Rights” workshops in the New York Muslim community, reeled in shock – along with many other Muslim, civil rights and Arab-American activists – as the story broke of rampant Muslim profiling being done by the New York Police Department in the name of counterterrorism.

Until then, McGoldrick (and others) had been teaching Muslim communities to forge trusting relationships with law enforcement, that “American laws protected them from discrimination – that civil rights law protected them from profiling, even if ‘counterterrorism’ seemed to be getting more invasive. I told them that the institutions were not the problem, but individual “cowboy cops” sometimes got out of line.”

I urged him to break down and explain what was happening between the NYPD and the Muslim Community in New York. He related a startling turn of events systematically breaking the trust between the NYPD and Muslims in New York. I was so naïve, he wrote, adding that advice he had been giving the community to trust in law enforcement came before he (and fellow activists) learned of several things:

“That was before we read “Radicalization in the West,” the New York Police Department’s “research” report that cast all observant Muslims as potential radicals. That was before the FBI and NYPD started manufacturing terrorist plots, sending ex-con informants and undercover agents into depressed communities, badgering young Muslim men into agreeing to be accomplices to crimes. That was before the Associated Press uncovered a comprehensive and warrantless domestic surveillance program set up for the NYPD by CIA operatives targeting Muslim communities of 29 “ancestries of interest,” according to leaked NYPD documents.”

Then came “The Third Jihad,” and a further breakdown of trust. Click here to read the story behind the Islamist propaganda film that was being shown as part of training to hundreds of New York Police Officers.

But, it didn’t stop there. The worst was yet to come.

By the end of last February, after Patheos first covered the breakdown of trust between the NYPD and the area Muslim community, the trust deficit grew even deeper when a series of ongoing articles from the Associated Press exposed wide-reaching domestic surveillance programs set up for the NYPD by the CIA. The last straw came with the report that the NYPD had been conducting secret surveillance on Muslim Student Associations at 16 colleges across New York and northeastern United States.  Click here to see how several NY-area academics, activists and students reacted to the news.

Since then, the pressure on the NYPD hasn’t let up, as New York and New Jersey Muslim activists staged rallies, protests, calls for investigation and put continuous pressure on law enforcement  and civic and government leaders to take the NYPD to task and fundamentally change their relationship with the Muslim and Arab communities. 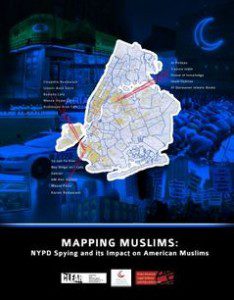 Now, one year later, a new report blows apart the impact the NYPD spying has had on the Muslim community, and its findings are chilling. “Mapping  Muslims: NYPD Spying and Its Impact on American Muslims” was delivered to the New York City Police Department Commissioner Ray Kelly and Deputy Commissioner of Intelligence David Cohen on Monday, March 11. The report was prepared by the Muslim American Civil Liberties Coalition (MACLC), partnering with Creating Law Enforcement Accountability & Responsibility (CLEAR) project of CUNY School of Law and the Asian American Legal Defense and Education Fund (AALDEF).

According to a press release:

“The report is an unprecedented collection of voices from affected community members, many of whom spoke with researchers under strict anonymity, and documents the impacts of NYPD surveillance on various aspects of religious, political, and community life. The report details how the NYPD’s extensive spying program creates a pervasive climate of fear and suspicion that encroaches upon every aspect of American Muslims’ lives, and severs the essential relationship of trust that should exist between law enforcement agencies and the communities they are charged with protecting.

What impact has this surveillance, ongoing since 2002, had on Muslims? Has it produced any useable intelligence on terrorism activities within the United States? As Hussein Rashid writes in Religion Dispatches:

“Perhaps the greatest contribution the report makes is to see how the surveillance is damaging the lives of New Yorkers. Spiritual leaders are afraid to meet with congregants (pg. 15) and congregants are afraid to pray in public (pg. 12-13). One woman even states that her mother would rather go back to war-torn Yemen than deal with the NYPD, so strong is her fear of police abuse (pg. 29).

And the damage being done to college students is unforgivable:

‘[F]or college students, typically aged between 17 and 22, the prospect of dealing with surveillance by a police department, infiltration of events and extracurricular activities by informants, and the potentially devastating academic, professional, and personal repercussions can be overwhelming (pg. 40).’”

He also adds that:

“When Muslims would go to the NYPD to report a crime they were interrogated by the so-called “Demographics Unit”; so the NYPD was not only surveilling individuals without cause, but it investigated victims of crimes who came to the NYPD to report those crimes. Paired with the assertion in the NYPD’s report, Radicalization in the West that one of the markers of a potential terrorist is that s/he does not drink alcohol, and you have the premises for police overreach.”

I remember when I first began covering Islam and Muslims in America as a New York correspondent for Islam-Online in 2001, one month before the tragedy of 9/11 struck. I was excited to return to journalism and writing after a two year break during which I had my first child. My father, though, was worried. What if people twist the words that you write? What if you are doing interviews and your phone is tapped? What if you are some put on some watch list because of your work?

I listened respectfully, filed his words away, and kept on with my career. I’ve spent more than a decade covering Muslims in America, and the findings of this report are ringing in my ear. I haven’t lived in New York for seven years. I’ve been out of college and MSA life for longer than I care to reveal. I haven’t changed myself or how I work, but I think about it.

We’ve had the FBI visit our house twice for seemingly innocuous reasons. My social media and online trail of articles, op-eds, opinions, statuses and shared reports on all-things Muslim is long and deep. Do I choose to live by fear or by the rights I know should be guaranteed to me and my family?

How are Muslims students to live their spiritual life? What kind of a country are we living in, with the declaration that we have freedom of speech and freedom of religion, when Muslim students and community members in New York are advised to check their words? When, as the report says, spiritual leaders are afraid to meet with their congregants and Muslims are afraid to pray in public? 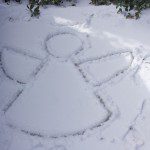 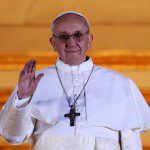 March 14, 2013 A New Pope, A New Beginning and Pi in its Infinite Possibilities
Recent Comments
0 | Leave a Comment
Browse Our Archives
Follow Us!