How do I Respond to the Mother’s Day Merging of Nationalism and Christian Cheese May 12, 2017 Suzanne Titkemeyer

Continuing on with Cindy Kunsman’s series on dealing with Mother’s Day outside of the Quiverfull bubble. All images and screen caps by Cindy Kunsman and Under Much Grace used with permission. 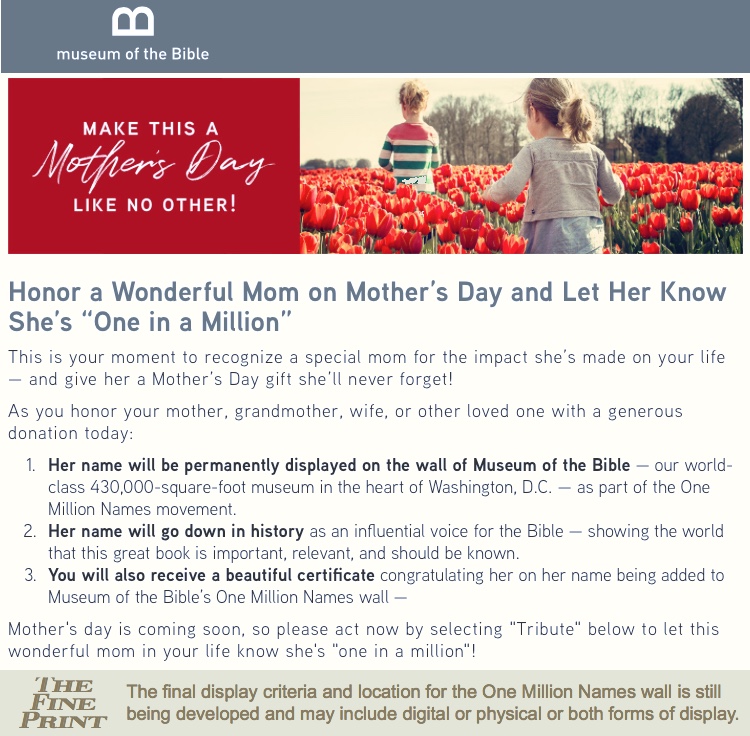 I have no idea how I ended up on this list or what happened, but I received this invitation to donate to this Mother’s Day fund drive. I’m on enough mailing lists that I know are bought and sold among Christian ministries, so I’m not a bit surprised.
As the above graphic notes, I’m invited to “Honor a Wonderful Mom on Mother’s Day and Let Her Know She’s “One in a Million” This is your moment to recognize a special mom for the impact she’s made on your life — and give her a Mother’s Day gift she’ll never forget!” Along with your gift, you get some kitschy commemorative certificate, along with the display of your mother’s name on the wall of what hopes to be a place of celebration of the Bible.

Apparently, some folks in Oklahoma have spearheaded the effort to erect a Museum of the Bible. The fact sheet describes the effort along training and courses and what promises to help communicate the Bible in a cell phone oriented world. Here’s the short version:

Museum of the Bible invites all people to engage with the Bible through museum exhibits and scholarly pursuits. Dedicated to the history, narrative, and impact​ of the Bible, the museum, located at 400 4th St. SW, will open in 2017 three blocks from the U.S. Capitol in Washington.

The sad thing of it is that a big part of me would love to do this for my mom – provided that I knew more about the endeavor itself.

I just can’t handle the job as her receptacle for all that’s wrong with her world and her distress over my growing up. She doesn’t accept me as I am, and I can’t keep up with performing for her moving target of expectation. It’s different when she’s coping well but impossible when she feels shamed or threatened. When I stopped absorbing her shame and disapproval, she interpreted my developing emotional health as a willful choice to hurt her. After leaving high demand religion and learning to resist manipulation, the healthier I became, the less of it I could tolerate.
It would be easier (I think) if she were a plain old narcissist who was void of empathy. But she’s not. She’s a confusing mix of extremes, and I never can anticipate when she’s going to swing so that I can adapt to her needs. Her heart aches for others (and me) because her heart aches for herself. She is kind and caring and generous, and she values the important things in life.  But she can also crush my heart and my will to live.

On good days, Mom is one of my most favorite people in the world, and I miss those days with her more than I can say. But I haven’t seen much of her good days in fifteen years, and they had already begun to be less frequent. I wish that I could express to her how precious and valuable she is to so many, but ironically, I understand from afar that this was denied her when she needed it most.  She either won’t or can’t receive that love from me.

Coping with the Christian Mother’s Day Schmaltz
I have no problem celebrating mothers and motherhood, but as the previous post attests and as last year’s Mother’s Day post describes in more detail, my childbearing years amidst the family focused and quiverfull movement has been less than pleasant. What does one say to people who ask about whether you visited your mother or if your children honored you for Mother’s Day when you can’t do either (in the way that those who can be just well meaning and/or nosy mean)? You can say anything you want! 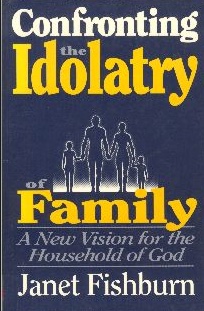 A wise cyber friend named Beth responded to the discussion this way:

We don’t really do much with it, either. I especially don’t care for the whole mother’s day themed service, with the traditional recognitions, mama songs, and the cursory sermon on motherhood.

I feel that when you take the time set aside for worshipping God and use it to place emphasis on another, you’re committing idolatry, regardless if it’s a person or “God and Country” Sundays.

I’m not surprised that she has reached this conclusion. That’s basically where I ended up, for the idol of family asked more of me than God does. The national folk religion of Quiverfull asks idolatry of everyone, and the family has been made over into a cruel master that can never be satisfied. That ideal of a Christian family has more fantasy than factual examples in this world today, and perhaps it always was that way. In the fold of the Quiverfull, there is definitely no place or value for us outliers who can’t succeed in the group’s primary show of their ideal of family worth.
Say Cheese! (Family with a side of Christian Nationalism)
(Actually, say whatever you want! Your family and your history of family really isn’t anyone’s business unless they know you well. Don’t be afraid to tell them so.)
I mentioned an old song to Lewis Wells the other day.  It compared the Statue of Liberty to the Cross of Christ. I remember weeping to it as kid, back when my nationalism, religious life and love for families all melded together,. I did enjoy liberty and had a true appreciation of it.  By comparison, Quiverfull has none at all.

Though I still feel embarrassing twinges of affection for that song, it’s got to sound completely nuts to people on the outside of that religious bubble of that era. Lewis who hosts The Commandments of Men blog made his living as a musician in that bubble for many years and was basically booted out of it because he became a dissident to the idolatry of family. He said that people just love to “eat up” the Christian nationalism stuff, just as I did as a kid. He said that “they like the cheese.”

I’ve learned to pass on the cheese. But people love it, and I guess that some have to give the people what they want.  (The analogy drawn between both foci of liberty wasn’t so bad, but the theology of the thing when you pull apart the words is just bizarre.  At least it is when you’re on the outside of the bubble, looking in.)  But I am unashamed of my Faith in Jesus, and I am grateful for the liberty that I will always have in Him.  And I am grateful for my liberty as a citizen for as long as it lasts.


At least one more post to come this year
discussing aspects of Mother’s Day.

It sounds like Lewis has had a belly full of the cheese, too. He’s started a new blog about the admixture of religion and politics – to keep it from clouding the focus on his writing about family idolatry. He called it Palinitis, and you can venture there at your own risk! (I would have called it Parah Salin, but I want the credit for that. I came up with the term on my own, so far as I know!)

Like me, he grew up immersed in Right Wing Christian Populism – probably worse than I was. My parents remained Democrats. I picked up the Christian Reconstruction stuff from Christian School and my mentor there. I eventually dove into the deep end of fringe as an adult, eating cheese by the fistful.
I’m a Libertarian, BTW, so I’m an equal opportunity lover and offender.

May 12, 2017
Weirdest and Silliest Mother's Day Promotions at Church?
Next Post

May 13, 2017 Quoting Quiverfull: Nancy Campbell Obsesses Over Penis?
Recent Comments
6 Comments | Leave a Comment
Browse Our Archives
get the latest from
No Longer Quivering
Sign up for our newsletter
POPULAR AT PATHEOS Nonreligious
1