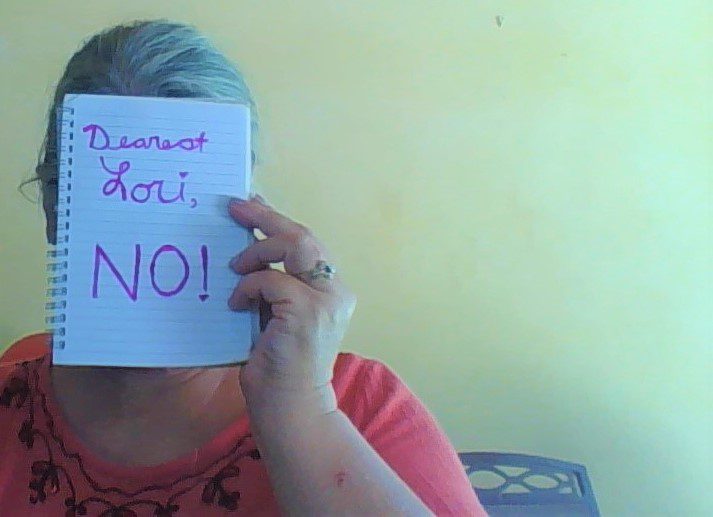 Lori Alexander of The Transformed Wife is trying futilely yet again to garner the maximum number of outraged eyeballs on her page. She’s talking about birth control pills, exhibiting her willfull ignorance of how they work. But the worst thing is that she is blaming them for feminism and claiming it is linked to communism. Lots of bad health advice being spewed by a woman that believes that toxic and banned Black Salve is better than a skilled dermatologist or plastic surgeon. So. Much. Ignorance it’s making my head hurt hard this morning, at least as much as the election results.  She thinks birthing baby after baby creates good health.

Having baby after baby in close succession has been shown in multiple clinicial and university studies to impact your health negatively. You cannot keep churning out new babies without some drain on your own resources. Lori forgets all the high maternal death rates during the days before birth control.

Clearly Lori does not understand that the feminism movement goes way back. Some say a French man named Charles Fourier is the father of the feminist movement back in 1837, predating that fear mongering communism that Alexander is using to justify her stance. There are waves of different types of feminism from different sources. Please educate yourself on feminism before you write about it Ms. Alexander.

The same with communism, It is more of a modern construct than you might think from around the same time as feminism and may have come out of the writings of revered Catholic saint Sir Thomas More.

Lori has very little knowledge of the things she’s saying in this piece to her detriment. 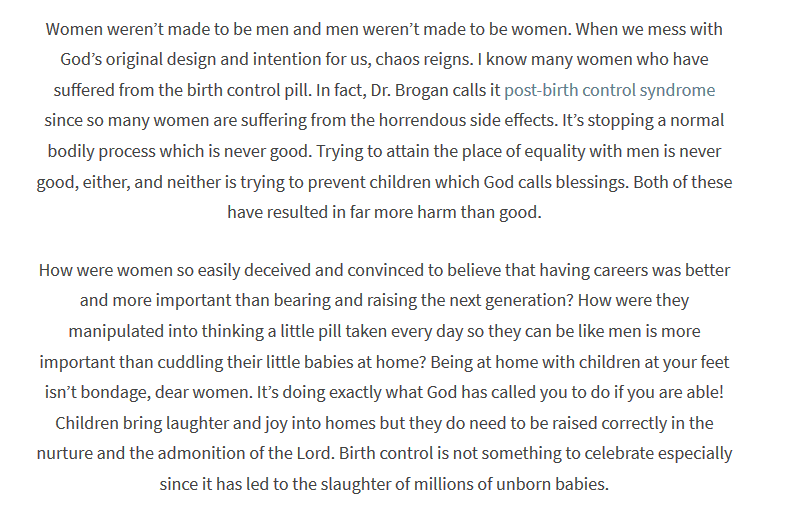 Dear Lori, taking birth control pills does not a man make of a woman.

There is just so much wrong with this entire article of Lori’s that I don’t have time or space enough to break it down paragraph by paragraph. But one of the biggest things wrong is the ‘expert’ Lori choses to base all of her health fear mongering on – the words of Dr. Kelly Brogan.

So who is Kelly Brogan? Kelly is a psychiatrist that does not believe in vaccination of children or adults. She believes chemotherapy and traditional cancer treatments are wrong, counseling only dietary changes. She bills herself as a woman’s health holistic psychiatrist. Apparently there are women going to her asking for the birth control pills as well.

Here’s a selection of frightenly non-science based quotes on illness from Vaxopedia.

Yes, she’s speaking of the shooter at the Sutherland Springs Church shooting in  Texas. No, adhd is not a smoking gun for mass shooters.

Is Brogan advising people with cancer to stop their traditional treatment? It sure looks that way.

This upsets me so greatly because at my old Quiverfull church I can name a number of ladies I knew very well that practiced just this type of pseudo-science that ended up dead. Quickly dead of cancer. Within six months the husbands had all married younger, prettier, bouncier cool Christian girls and moved on. Women are completely interchangable in Quiverfull. 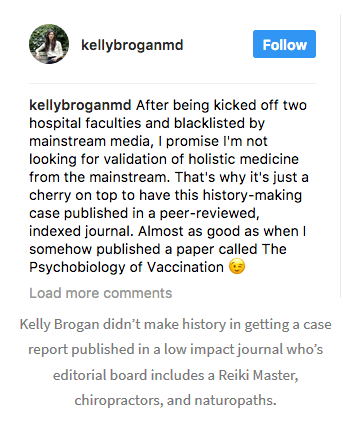 Hospitals kicked her out? Well of course! Hospitals tend not to like doctors who kill their patients off quicker than usual. It screws with their ratings and impacts the financial bottom line of the hospital. You have to meet and maintain a certain level of competency to practice in more places. Plus what is a head-shrinker doing treating cancers and other ailments in the first place?

How is anything coming out of Dr. Kelly Brogan’s mouth any different than the ridiculous faux-health claims of known lunatic with bad health advice Jillian Epperly with her salty moldy cabbage water?

The fact that Lori Alexander is in contact with Dr. Kelly Brogan and they are apparently having a love fest in their personal echo chamber should alarm rational adults who believe in science and medicine. This is merely the blind lunatic leading the other blind lunatic off a cliff while taking a pile of gullable religious people with them. We are witnessing the dumbing down of our country.

Is this a new type of unnamed mental illness sweeping our land?

And on an entirely differing note something very interesting has been going down in Lori Alexander’s Facebook chatroom. One of the ladies was talking about people she knew, that her pastor knew in the most derogatory terms. Someone legitimately called out the lady for gossiping, that insidious nasty prayer gossip, you know the type and Lori Alexander lost it. Her response. 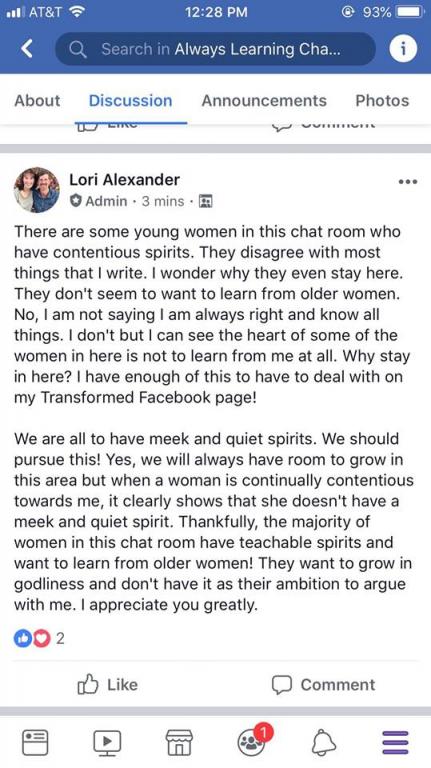 About Suzanne Titkemeyer
Suzanne Titkemeyer went from a childhood in Louisiana to a life lived in the shadow of Washington D.C. For many years she worked in the field of social work, from national licensure to working hands on in a children's residential treatment center. Suzanne has been involved with helping ithe plights of women and children' in religious bondage. She is a ordained Stephen's Minister with many years of counseling experience. Now she's retired to be a full time beach bum in Tamarindo, Costa Rica with the monkeys and iguanas. She is also a thalassophile. She also left behind years in a Quiverfull church and loves to chronicle the worst abuses of that particular theology. She has been happily married to her best friend for the last 32 years. You can read more about the author here.
Previous Post

November 7, 2018
Having Emotions is Trying to Control Your Husband?
Next Post

Nonreligious
Is There a Looming Sex Scandal at Faithful...
No Longer Quivering