Artisan Bread is a Rebellious Plot?

More Doug Wilson from Blog and Mablog on his series on rebellion. Thanks to a sharp eyed reader this morning. Doug is now explaining how he thinks artisan bread is a rebellious plot, and he’s supporting white bread. As if it actually mattered to theology if you eat sourdough or Wonder bread!

This is part of his claims on how rebellion is the thing that drives the marketplace. Instead of realizing as the information on nutrition spreads and people become informed on such issues Doug decides that good bread is some sort of expensive elitist plot. 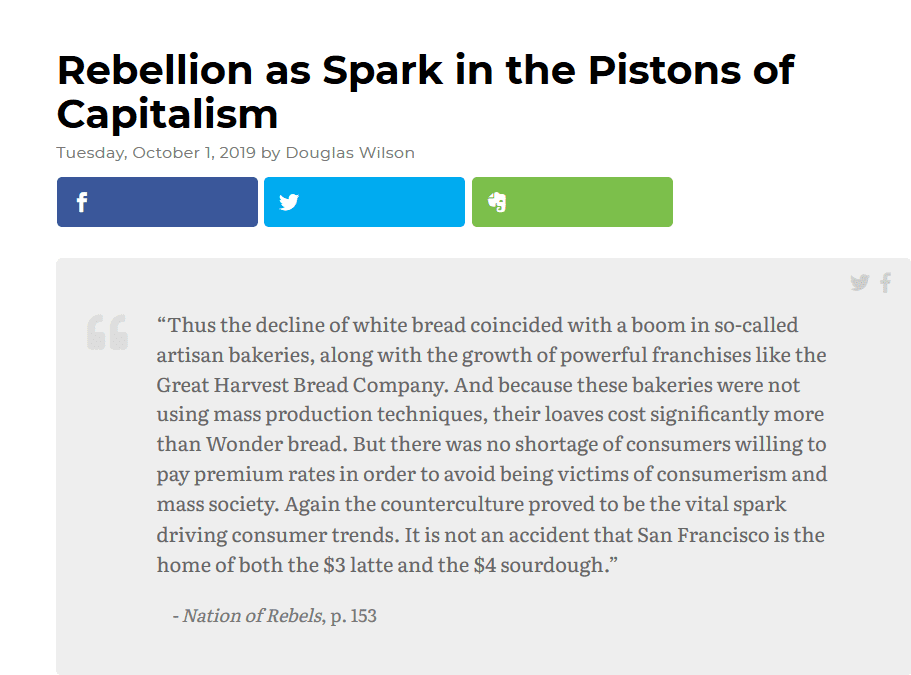 Actually I think Doug has this very wrong. I remember Roman Meal bread back in the 1960s when my mother started to bring it home instead of white bread. Looking at the history of just that brand it goes back much farther, to the physician Robert Jackson as a whole grain cereal brand before branching out into bread.

Roman Meal is just one of many companies that have been making bread that is not white bread. Great Harvest originally opened in the 70s, first in Connecticut and later moving to Montana.  Google your favorite brand and I’m betting it predates Doug’s claims here.

So if they aren’t mass producing they are some sort of commie plot? I cannot even figure out what he’s the most annoyed it. The fact that the bread costs more? That it’s handmade? It came out of San Fran?

It never dawns on Doug that the reason people buy artisan bread is that it tastes better to them than a loaf of Wonder bread. Sometimes consumers tastes change and if companies don’t keep up with it they lose.

Guessing Doug does not think that celiac is a real disease either, or true wheat allergies. Just shut up and eat that Wonder bread.

Ironically the most obsessed with good bread people I’ve known were at my original Quiverfull church. Bread recipes traded, talk of what Mennonite store had the best whole wheat bread. Read Zsuzsanna Anderson’s blog, or even Lori Alexander’s and you’ll see some talk of healthy breads.

Plus, I am dying to know where Doug is getting his $3 lattes? Was stateside last week and saw none cheaper that about $5 dollars.

October 3, 2019 Win Him Without a Word Right Up Until He Asks For Group Sex?
Recent Comments
58 Comments | Leave a Comment
"Hang on, I think I pulled something rolling my eyes."
WMDKitty -- Survivor Create a Better Brain Through Neuroplasticity ..."
"yeah, and handle them like they have the plague on them when you take them ..."
C Kunsman Open Thread Covid 19 – Harketh! ..."
"Do this with shop towels, but use two layers and put one in a different ..."
C Kunsman Open Thread Covid 19 – Harketh! ..."
"Love this article and really love your blog. Thank you:)"
P. Joan Gavigan Create a Better Brain Through Neuroplasticity ..."
Browse Our Archives
Follow Us!