How bad is it? Really? 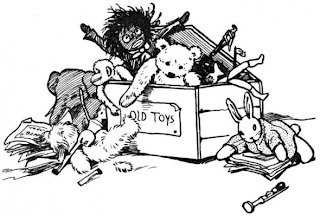 “You make a mess!” She shrieked at Ms Drama. “Look at this, there are toys all over the place! You are going to get a spank!”

After reassuring my 3 year old that it is OK to make a mess sometimes I wondered where that outburst had come from? I certainly don’t freak out that badly over messes, and I haven’t spanked or threatened to spank in months. Did she see it on a TV show? Was it a hangover from visiting relatives?

I decided that maybe it was just a fluke, and forgot about it.

The next day I saw her toss her dolly on the floor with a huff and say that she was a “pain in the butt”. I was horrified! Where was she getting this terrible attitude? It couldn’t be me, I would never throw my child around, and I have never told any of my children they were a pain in the butt.

I couldn’t get it out of my mind. The repeated scenes of negativity were really bothering me. Was this the first time she had done stuff like this? Or was I just noticing it now? I suddenly remembered telling my hubby that Ms Action had wailed “everything went wrong!” when she didn’t get her way. We had laughed over it then, but now that I thought about it, “everything went wrong” sounded pretty defeatist. Or that time she shoved her sister and yelled “what is wrong with you!?” for no reason.

I could think of some other examples of intensity over seemingly mundane stuff, but I still couldn’t pinpoint where she was getting it from.

A few days later I was sitting on the stool in the bathroom waiting for Ms Drama (who typically drags out the process) to finish her business on the toilet. I was bored, tired, and counting down the last 45 minutes before the kid’s bedtime. It had been a long day. Ms Action arrived on the scene, pushing her way into the bathroom, dragging a large toy xylophone behind her and carrying a few books under her arm.

I let out a large sigh. “What are you doing?” I whined, “Why are you bringing a toy in here and making a mess? Come on! I just cleaned this bathroom today.” I watched Ms Action shrivel up and leave the room.

And I suddenly realized the source of the negativity. Me.

How many times in the day do I complain about one incident or another? There is no rule about not bringing toys in the bathroom, there really wasn’t any malicious intent on her part, she was just trying to be near her sister and her mom. If I really couldn’t handle the toys in the bathroom, there were positive ways I could have asked her to take them out. Instead,  I gave her the message that she would only mess up the clean room and annoy me.

Maybe I’ve never told my kids to their face that they are a “pain in the butt” (although I’m pretty sure I’ve told my hubby that they were a few times) but I’m surely sending them that message when I overreact to daily mishaps.

Now I was flooded with memories, of myself storming into the kitchen after hanging up the phone because I knew the girls were playing in the sink again. Had I yelled? What exactly had I said? Had I yanked them off the chair a bit roughly? I was making a big deal out of minor incidents.

Or that time I had started to cry when Ms Action had refused to put her clothes back on after removing them for the sixth time that day. I was taking stuff way to personally when things went badly. I really was acting as though “everything went wrong”.

How had I failed to notice that my repeated intensity over mistakes was influencing my daughter?

I have stopped spanking. I am working on eliminating all yelling. I have become so careful to notice and praise my children. And yet, I have still allowed negativity to creep in and influence my parenting.

Why am I being negative towards my children when they have no ability to change the circumstances?

How I feel relates directly to me, not how my children behave or how clean my house is. I can control how I relate to my children. I am the one responsible to recognize when I am feeling overwhelmed or exhausted and find a way to deal with my feelings and care for myself without taking out my frustrations on my children.

I know that conquering this habit involves catching myself when I overreact and shutting my mouth when I feel like complaining. But it also involves making sure that I do not place the blame for my feelings onto my kids shoulders.

Bigger Picture Moments is where we step back and take in life. This week it’s being hosted by Sarah at This Heavenly Life. Hop over to her blog to read more about the Bigger Picture, and maybe share your own moment.

September 10, 2010 Quick Takes #26: Helpful Tips
Recent Comments
0 | Leave a Comment
Browse Our Archives
get the latest from
Nonreligious
Sign up for our newsletter
POPULAR AT PATHEOS Nonreligious
1