The Church of Me 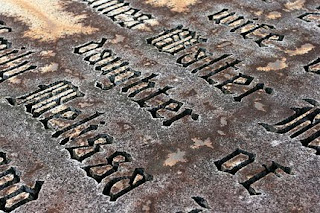 The other day, I went wandering through an old graveyard with my husband. Maybe I’m weird, but I love reading the tombstones and trying to grasp some of the story behind the dates and names.

And there are the graves of children.

The tombstone of a child never fails to move me. It’s almost as if the grief of the parents is still hovering around the grave. Most of the time, the parents are later buried next to the child they lost. Sometimes those parents lost their only child, sometimes they lost more than one, sometimes they lost every child. Whether it’s the grave of two small boys aged seven and nine, lost within a few days of each other in a December over 100 years ago, or the grave of several day old babies lost by the same parents year after year, they are all heartbreaking.

I may be afraid of being a christian, but I find myself unwilling to reject the faith completely. I still think that the world has a creator, and despite myself, I want to believe that creator cares about us. I want to see my babies that I’ve lost. I want there to be a reason to love.

The hope for a Resurrection is what keeps me interested in Christianity despite all of my doubts and questions.

I’ve had many people suggest that the solution to my dilemma of kind of wanting Christianity but not really loving the church, is that “Jesus is enough”. That I don’t need to be a part of organized religion, I can just believe in Jesus and be the kind of christian I want to be and refuse to conform to what anyone else says Christianity is.

Kind of like how Ann Rice announced earlier this year on her face book page:

I can see why this sort of thing is appealing. No guidelines, no having to go to church, no people judging whether or not you are trying hard enough to fit in to their particular denomination/group, no more having to sing praise songs that make no sense, and no more overhearing Sunday school lessons taught to your children on the wrath of God. You could personify the christian you felt Christ really called us to be. You could teach your children who you understand God to be without the interference of well-meaning but clueless people in the Christian community.

The problem is, I’ve already experienced it. I grew up in “The church of my father”. My parents refused to be confined by a church they did not agree with 110%, so they ended up without a church. And in the process they created their own church.

Though my Dad would be appalled to hear me say it, he was pope. And his word was infallible. Only this pope was unelected, and there were no bishops or doctrines to keep him in line. My parents taught me about God in the best way they knew how, but they are not perfect. There was no one else in our life to flag excesses, be there for us, ask questions. God was portrayed to me solely through my parents.

No matter how much I feel that I’ve figured out about God, I would be doing the same thing to my kids if I created “the church of me”. I cannot be God to my kids, I am flawed in so many ways. There has to be something bigger, something outside of the individual. There has to be a community to contribute to my children’s knowledge about God, so that people with strengths in the area’s I have weakness, can help to demonstrate who God is.

There has to be a church.

If I choose to be a christian, I have to be a part of a church.

The church of me is not enough.

September 16, 2010
Mommy Guilt and Taking Care of Myself
Next Post