I’m Allergic to the Bible 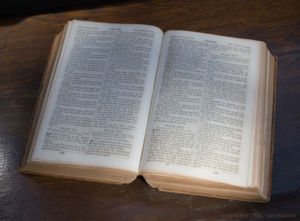 I think I’m allergic to the bible. I’ve had many many people tell me to stop listening to everyone else and just read the bible, and I’ve tried again to read it consistently in recent months, but it’s no use.

It’s not like I’d be reading something new anyways. I grew up saturated in the bible. We believed it was the literal word of God. We listened to it on tape, we read it everyday as a family, I read chapters upon chapters every day by myself. I have large portions of it memorized. I know what it says, I know what it teaches. I’ve read it in several versions.

But right now the only parts that don’t send me spiraling into depression are a few of the Psalms and parts of the Gospels.

Take for example the story of Abraham and Isaac and the sacrifice. If I EVER had a feeling that god wanted me to make a human sacrifice of one of my children, that would be the last day that I served that god. Instead, Abraham trusts and submits, and so does Isaac (This story is used in many fundamentalist books to justify god’s demand for older children to have blind obedience to parents. After all Isaac was about 20 when this story took place, and apparently he completely trusted his father an let him tie him onto the alter.) After god steps in at the last minute, he reveals that it was all a test to “see if Abraham really loved him”. Yeah, the “all-knowing all-loving” god had to do a little test to make sure that Abraham wasn’t getting to attached to his kid. The thought makes me gag.

I’ve mostly given up on reading it at all. But recently I tried again and got a few child’s versions. My almost 4 year old has been asking about Jesus, and loves to read bible story books and look at the pictures. I got a simple child’s bible that is wildly popular, it has a picture on every page and is directed at ages 2-5.

The stories were simple to understand, things were going OK. Until I got to the chapter telling of the crucifixion titled “The sad day”.

“Jesus knew he had to die, it was part of God’s plan.” My chest tightened up. Why would they use those words to describe why Jesus died? “God’s plan” I remember my Dad explaining and justifying a god that “beats you over the head with a 2×4 until you get with the program”. You are practically helpless without god, he controls everything. Even doing daily tasks demands “relying on the spirit” and everything will be destined to go badly if you dare to step outside of god’s will/plan. I tried to shake the old messages off, maybe it was just hard to sum up the crucifixion in a few sentences? I decided to to give the bible the benefit of the doubt and try again.

So I got a different bible. This one was supposed to focus heavily on Jesus, written for ages 4 and up. The pictures were beautiful and every story did seem to point towards Jesus. I was excited, maybe this one would be different. We read the nativity story at Christmas time, and it was descriptive and sweet. Remembering the other child’s bible, I decided to look ahead to the crucifixion and see how they explained it.

My stomach started churning as I read about the garden of Gethsemane. The book describes Jesus sobbing in he garden, begging god to find another way to “get rid of the poison” in people’s hearts. But no, there is no other way other than Jesus having all of the “poison of sin poured into his own heart” god would have to “blame Jesus for everything that had gone wrong”, every sin ever committed as well as the sickness in peoples bodies. So Jesus becomes submissive and quiet, “like a little lamb” And says “whatever you say, I will do. I trust you.”

In the next chapter Jesus goes to his death, and from the cross he screams for his father as tears roll down his face. “And nothing happened. god didn’t answer. He turned His face away from His boy.” and on the next page it explains how this was the only way god could vent his fierce anger about sin without destroying the people whose hearts are filled with sin. Instead he destroyed his own son. 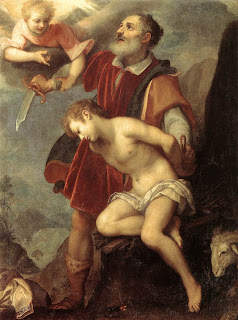 I felt physically sick reading it. I felt dark for several days afterwards. Once again, god is portrayed as a petty, twisted, narcissistic, evil god. He can barely contain his human-like rage over people breaking his rules. Nothing but complete surrender and quiet submission will do for this angry controlling god. Hearing this message over and over, from parents, sermons, multiple songs, books, and now a children’s bible, makes me seriously doubt my hopes for a loving God.

I already struggle to believe, and whenever I read the bible I feel decidedly Atheist. Or at least ready to kill myself rather than try to come to terms with the existence such a sick god. When I saw bloggers “resolving” to read more of their bible in 2011, I wanted to scream in the comments “Don’t do it!!! Let it gather dust on your shelf! You won’t have a relationship with God left after you read it!”

I can’t read the bible. I cannot imagine trying to teach my children about that god. I can’t believe in that god.

January 7, 2011 Lunchtime Conversation
Recent Comments
0 | Leave a Comment
Browse Our Archives
get the latest from
Nonreligious
Sign up for our newsletter
POPULAR AT PATHEOS Nonreligious
1