A story of a Pumpkin 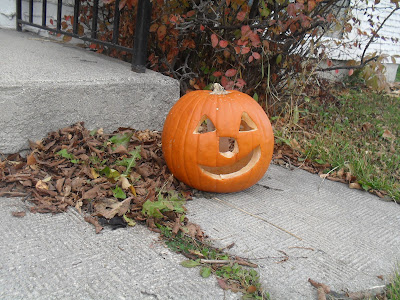 We’d been married for several months when our first Halloween rolled around. At the Seminary apartments we lived in, we shared a porch with another young couple who were finishing their religious studies that year, and one day our neighbours put a Jack-o-lantern outside their door.

We got home from wherever we had been that evening, and there it was, grinning wickedly between our door and theirs. My religious soul was offended, how could someone studying to be in the ministry be dabbling in such a occultist celebration? And the smiling pumpkin sitting on our shared porch could make people think that we celebrated this evil day as well, inviting trick-or –treaters to our house.

And so, I strode up the steps to our door (long modest skirts swirling around me) and I turned the pumpkin so the carved features were now facing their side of the porch. Now no one would think that we approved of this sort of thing. My husband and I smiled, we didn’t want any evil spirits haunting our home, surely this couple would get the hint and get rid of the jack-o-lantern.

But the next day when I walked outside, the pumpkin had been turned back, facing out towards the street again. So I turned it around again, so that it looked like a regular pumpkin. Just your average fall decor here! None of that “Halloween” stuff at this house! This continued for several days. We turned the pumpkin, and they would turn it back. We moved the pumpkin to their side of the porch, they moved it back to the center. It was starting to get frustrating, evidently they were not catching the hint.

One day when I walked out on my porch, I noticed the pumpkin had a piece of paper taped to it. It said simply, “Do not touch the pumpkin.” We were not deterred in the least! This was our porch too! So my husband drafted a note in reply, explaining the alleged “pagan and therefore satanic” origins of Halloween (or as it should properly be called “Sahmain”) and we were not interested in inviting evil spirits into our home, so we did not appreciate them putting their pumpkin so close to our door. We left the note lying on top of the pumpkin, and the next day the evil jack-o-lantern had been moved to the other side of the porch. Victory!

Six years later, we have a Jack-o-lantern sitting on our porch.

This didn’t happen overnight. Back then Halloween was a very scary night for our fundamentalist Christian souls. It was the high holy day for witches and devils, and participating in that sort of “satan worship” would only lead to bad things. For several years we left the house on Halloween night, or at least pulled the shades and refused to open the door. Only two years ago I answered the doorbell and explained to an adorable little pirate and his mommy that we did not celebrate Halloween. But last year was different.

We had started asking lots of questions about everything, so naturally we questioned our position on Halloween too. What were we really afraid of? Were we afraid of the little kids in cute costumes? Was a large gourd with a face carved into it really that fearful? Were we afraid of Evil Spirits? Actually, not really anymore. In questioning God, I started to doubt the existence of Satan as an actual being, and either way I had stopped experiencing my “spiritual” panic attacks. So we decided that it was OK to give out candy to trick-or-treaters.

I don’t think I will ever be on board with how some have emphasized gore and horror on Halloween. I see no reason to celebrate some of the worst elements of humanity. But I now understand Halloween as a silly, spooky day, where kids get to have treats and exercise their creativity in putting together a costume. Halloween is just one more opportunity for custom, traditions, and family togetherness.

So yes, we have a pumpkin on our porch, and a bowl of candy ready to give away, and a very excited Pirate, Princess and Fairy to take out for our first ever Trick-or-Treat. And if someone answers the door and says “we don’t celebrate Halloween” I think I’ll just smile and nod and say “been there, done that.”

November 4, 2011 Choosing Respect
Recent Comments
0 | Leave a Comment
"As a new mom, even if my daughter is a toddler now, weaning is really ..."
Lynn Toh Weaning my Tandem Nursed Toddler
"So, I came across this post for the first time today, two years after it ..."
Sheila Warner Finally Heard? The Duggar Aftermath
"Just wanted you to know that I keep checking occasionally for updates, and I hope ..."
William Burns Brave New Life: Part 7: The ..."
"> How does that make sense?It saves them lots of money."
Tim Locke How I lost my fear of ..."
Browse Our Archives
Related posts from Permission to Live