Unwrapping the Onion: Part 4: When It Doesn’t Add Up 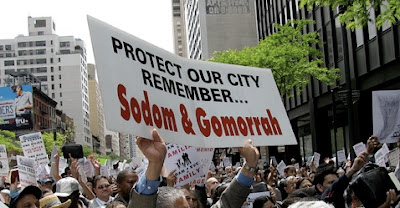 I had always been under the impression that LGBTQ people were a new phenomenon. That the population of gay and transgender people had really taken off during the modern age those “godless” sixties. And that before it had become “cool” to be gay, virtually no one was. But that wasn’t making sense anymore. Even today, being queer continues to unleash considerable bias and discrimination. Kids are still routinely getting kicked out of their homes for admitting they are gay or trans. I couldn’t see any benefit to coming out as LGBTQ unless that really was who that person was.

In my research I had begun to uncover stories of gay people throughout history, and not only that, transgender people were around too. Throughout history is a whole list of people who upon their deaths were discovered to have anatomy which did not conform with the gender they had publicly lived as. Some of these persons were quite famous such as Chevalier d’Eon, a French diplomat during the 18th century; but most of them were ordinary people who knew that the gender assigned at birth did not match them. Growing up I had read some stories about women who disguised themselves as men to serve in the military such as during the Civil War, but what I hadn’t picked up on then but discovered later is how many of them continued to live as men after the war ended. Without the help of any of the medical advances of today, these people transitioned to living authentic lives in the gender that they felt fit them. My research was starting to point towards gender variant people as being a part of the diversity of the human family whose source was from antiquity. The myth of transgender persons being new or a radical experiment of the psychological community didn’t add up.

Because the Catholic church took a different position on LGBTQ issues than did the conservative Protestants among whom I had been raised, I talked about transsexuals with a man studying to be a catholic priest. I had hoped that he might be able to give me some knowledge, some wisdom, some word from god, but his recent and ongoing education seemed really out of date. He tried to be kind and considerate, but seemed convinced that transsexuals were either homosexuals trying to attract men who wanted to change their bodies to achieve that goal,  or they were an autogynephiliac, meaning that they were “sexually aroused by the idea of having female body parts to play with.”

Neither of these sexually charged explanations made any sense to me. First off, from what I had read, many transsexuals (including my spouse) were very attracted to women, and they had no interest in changing their body to attract male attention. Any physical changes they made seemed to be made for themselves, not anyone else. And how did this theory on transsexuality apply to female-born persons who transitioned to living as men? Were they changing their bodies to be more attractive to men? The second explanation he offered wasn’t any better: my spouse did not have an obsession with having female parts to masturbate with. A transgender person who seeks to make physical changes, is willing to accept a variety of outcomes, including unforeseeable changes to sexual function. I could hardly see how someone with a sexual obsession would be willing to take those risks and make those sacrifices. And again, how did these explanations apply to transgendered people throughout history who had lived for years in the gender opposite that assigned to them at birth? This was centuries before the modern therapy options had become available, and they would not have been able to change much about their bodies. Many of them lived completely celibate lives, so that their secret would never be found out. This did not sound like a sexual obsession to me. Even today there are trans people who are happy living in their chosen gender without doing any modification to their bodies. The theories the priestly candidate gave me seemed full of holes. I started to feel more and more frustrated. People weren’t fitting into my nice little religious boxes anymore.

Furthermore, in my reading I had started to realize that LGBTQ people were denied many of the legal rights I took for granted. Growing up as a conservative Christian I was always under the impression that our rights were being snatched away one by one by the liberal and secular government. Now I was starting to realize how many U.S laws were based on religion. A straight person was free to marry who they fell in love with, but if a gay person fell in love and wanted to make a commitment to that person and have the legal rights that such a union provided they were not allowed to. Parents who came out as gay or lesbian persons often lost custody of their children to the straight parent in a divorce, and in many states LGBT people could be fired or even denied housing based on their sexual orientation or gender identity, real or perceived. I could not come up with a reason these laws existed other than religious understandings of the legal contract of marriage and sexuality, and the religious bias that made employers and landlords want the right to discriminate.

At this point I still believed that God was not OK with people “acting on unnatural desires,” but if people really were just born with these issues, and did not get them through any desire or action on their part, then why were religious people trying so hard to make life difficult for them regardless of the religion these people were a part of? And how was it alright for a government to be enforcing laws based on any religion? I thought about how scary it would be if an employer decided my spouse was too feminine and fired him and we had no legal recourse. How was this an OK law? I was horrified that people could have their children taken away from them simply because they didn’t fit into a nice little religious box and play up what society had decided was the “norm.” How did that have anything to do with their ability to love and care for their child?

When I tried to talk about this new understanding with people I knew, they were shocked. Some of them became visibly angry and accused me of abandoning my religious beliefs. In one conversation with one person, I tried to explain why I felt it was wrong for landlords to be able to deny people housing based on their sexual orientation, the reply I received was this:

“Melissa, think about it. If you could only afford to live in one apartment complex in town, and there were gay people living there, would you really want your children exposed to that?”

My heart sank into my gut. To this person LGBTQ people were perverts, a menace to society and a danger to children. If this person knew my spouse’s secret, or even my own same-sex attraction, would they feel safe having us around their children? Would this person feel we were unfit to have children ourselves? To most of the religious people I spoke with, giving all people equal rights meant that they were giving up religious rights somehow.

They simply could not put themselves in a gay person’s shoes, even for a moment, and I was ashamed to realize that
I had never tried to think about it myself until I recognized
the issue in my life.
Click here to go to Part 5
Previous Post

April 18, 2012 Unwrapping the Onion: Part 5: The Beauty of Acceptance
Recent Comments
0 | Leave a Comment
"As a new mom, even if my daughter is a toddler now, weaning is really ..."
Lynn Toh Weaning my Tandem Nursed Toddler
"So, I came across this post for the first time today, two years after it ..."
Sheila Warner Finally Heard? The Duggar Aftermath
"Just wanted you to know that I keep checking occasionally for updates, and I hope ..."
William Burns Brave New Life: Part 7: The ..."
"> How does that make sense?It saves them lots of money."
Tim Locke How I lost my fear of ..."
Browse Our Archives
Related posts from Permission to Live