Evolution, Evangelicalism, Inerrancy, and Pin the Tail on the Donkey

Evolution, Evangelicalism, Inerrancy, and Pin the Tail on the Donkey July 15, 2013 Peter Enns

) and online essays lately on evangelicalism and evolution, and I have to stop and ask myself:

Can evangelicalism really incorporate evolution into its theology system, or do these very attempts expose the problems of evangelical theology that need to be addressed?

I’m not sure evolution and evangelicalism in its current form can ever truly coexist.

For mainstream evangelicalism, Adam must be in some sense a historical individual. Why? Adam as myth, metaphor, symbol, etc. is, we are told, beneath Scripture’s dignity. Also, Paul’s references to Adam in Romans 5 and 1 Corinthians 15, however brief, indicate that Adam as first man is foundational to the gospel.

As long as the Bible and the gospel are seen to be at stake, evangelicals willing to discuss evolution will be forced to think “creatively” about how make a successful merger.

The problem, though, is that these creative attempts are ad hoc–which is a nice way of saying “let’s make up something as we go along to maintain our way of thinking.”

The two most common attempts are (1) to see Adam and Eve as the first hominids in the evolutionary line that God chose as the first representative humans, and (2) “Adam and Eve” represent the gene pool from which the current world population is has descended–which I am told by people who know these things is something like 5,000 to 10,000 people living 100,000 or more years ago.

Neither Genesis nor Paul say either of these things. I continue to find it ironic that, in an effort to protect the Bible, some see no problem in advancing readings of texts that aren’t there and for which the biblical authors had no frame of reference.

As far as I am concerned, these ad hoc solutions do more to expose the inadequacies of evangelicalism than they do to solve the problem of a biblically oriented faith vis-a-vis evolution.

Merging evolution and inerrancy like this is what Denis Lamoureux has called “pinning the evolutionary tail onto the evangelical donkey”–blindly stabbing away, hoping to hit the target one of these days.

Or to use another image, one cannot simply graft evolution onto the evangelical theological system and hope no one notices. This graft will never really take to the host. One will always see the mismatch. To ward off infection and tend the graft, rounds of medication are needed. When going out in public, the area has to be protracted with layers of gauze, covered up with clothing, or disguised.

The root problem here is that the evangelical theological system is seen as the immoveable starting point–that center around which all else needs to adjust. This is why ad hoc solutions are necessary—and why so many are willing to make themselves think they actually work.

But this attitude creates the very cognitive dissonance so palpable within evangelicalism. The way forward, I feel, is not to make up transparently ad hoc solutions to the problem–finding a better graft or training people to play a better game of pin the tail on the donkey.

It is time for evangelicalism to sit down and think this one through–without feeling that lines have to be drawn immediately, theological turf has to be protected, or that “the gospel is at stake” every five minutes.

Some may not be able or willing to consider critiquing and adjusting their theological system. That’s fine with me. They don’t need to be a part of the dialogue.

Consider evangelicalism on a scale of 1-10, with 1 representing the most conservative end and 10 the most progressive form of evangelicalism. Forgive me for not defining what 1 and 10 look like exactly, or who fits where–this is a blog post, not a treatise. Stay with me.

1-10 represents the current spectrum of evangelicalism, the acceptable ends of the scale. For those wishing to work within the evangelical tradition, I think the only way forward is to shift the scale from 1-10 to, say, 4-13.

Leave 1-3 behind intellectually (I’m not talking about shunning people), i.e., those whose view of evangelicalism is viscerally opposed to this needed discussion, and bring into the process those who sympathetically see the problems with the evangelical system but are willing to work through and from it toward different models, i.e., 11-13.

I understand that no one can stand up and speak for an entire diverse movement like evangelicalism and say, “O.K., you’re a 2, so you’re gone; Ooooo, I like this new idea, let’s make it a 13.” There is no clearing house for evangelicalism–try as some might to claim that right. A self-redefinition of evangelical consciousness can only happen on smaller scales–in schools, denominations, para-church organizations, etc.

As yet, I am aware of no evangelically oriented organization that is seriously musing about how evolution affects evangelical theology. What I see is endless games of pin the tail on the donkey and skin grafts that won’t take.

July 11, 2013
The God of Intelligent Design is a terrible pool player, and other insights by Denis Lamoureux
Next Post 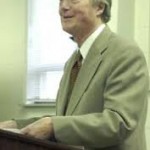