Update: Father Frank published a few replies to Mary Pezzulo’s comments on his Facebook page’s thread. The replies are the bottom of this post.

So, I shared my testimony of being raped, and how it felt to have rape publicly minimized by “pro-life” people when I myself am also a devout Catholic against abortion and want it to stop, on Father Frank Pavone’s public wall. I asked him to respond to rape victims to whose pain he was being so callous, adamantly supporting Trump.
And, shockingly, he actually responded. Sort of.

He said, “Rape survivors… As if abortion helps them. Talk to those I”ve counseled who suffer more from the abortion than from the rape.”
And that’s it. That’s all he said.
And his followers presumed I was pro-abortion and had had an abortion and trolled me a bit, because they also didn’t read what I’d posted.
And when I asked him to actually read the article I wrote, there was no response. And when my friends asked him to read my response, there was nothing. Crickets. He does not care to understand.
This man claims to counsel rape victims, but he has demonstrated that he absolutely refuses to hear what they had to say. He has one narrative he plays over and over in his head, and that’s the only narrative he’s willing to hear. I wouldn’t wish his counseling on any of my fellow rape victims, not for anything. What we need is for someone to hear and understand, and he’s incapable of reading a testimony of less than a thousand words before presuming he knows what someone is talking about.
I used to have respect for Father Pavone, as I mentioned at the beginning of this week. I admired him for some of his past work.
I now realize I was wrong.
You can see the conversation here.

Father Frank Pavone has been subject to some concern related to his support for Donald Trump and his use of the non-profit “Priests for Life” to advance Trump’s cause.

Father Frank Pavone continues to support Donald Trump and is encouraging others to vote for Trump this November.

I reached out to Priests for Life tonight for comment and have not received one. We will update this article and share Priests for Life’s comment if and as soon as we receive one.

Fr. Frank Pavone responded to Mary Pezzulo’s comment an hour ago, around 7 AM Pacific Time.

The comments were added to the same Facebook thread Pezzulo reached out to Fr. Frank on and were made separately. HEre’s the comment in text form, kindly sent to my by Priests for Life shortly after they were published on the thread:

Are you really interested in talking with me? If so, just email me at Director@priestsforlife.org. I will see the email and reply to you. Or are you interested here in something else? Our ministry helps people who have been raped, and helps people who have had abortions, and helps save women from abortions. If you want to know more about that, again, just ask me. But if this online discussion is about politics, then we can talk about politics. If you want to see more rape, more abortion, more sexual promiscuity of every kind taught in our schools and embodied in our laws and court decisions — and with us paying for it and not free to preach against it — just vote for the party that most wants to support, defend, bless and fund Planned Parenthood and put judges in place who will uphold their agenda. So just let me know what it is that you really want to talk about and I’ll give you all the answers you want. 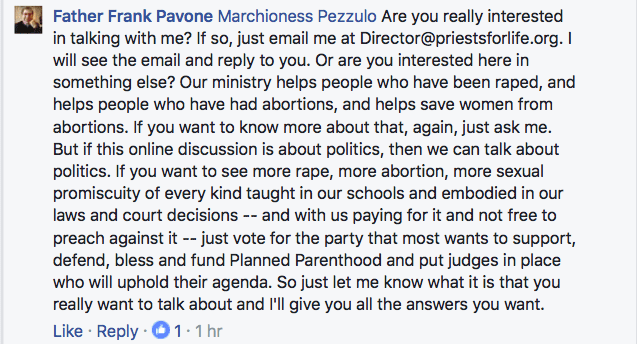 To continue to respond to your concerns, I did indeed read your post, and want to thank you for sharing your concerns online. Your experience of rape is one that, sadlly and as you know, is shared by too many in our world… and the pain is not adequately understood. On behalf of anyone who is insensitive to that pain, especially in the name of prolife, I want to offer my own apology. To say “well you didn’t die” certainly hurts — because it says to people like you, “your pain doesn’t matter, or is not significant.” But it does matter and it is significant. You can be sure that as i do the pastoral and educational work i do in helping prolife people advocate for the unborn, I always try to instill a sensitivity to this pain. What is happening hereis that your pain is getting caught up in the crossfire of the current political debate. We need to try to separate the two. No candidate is trying to make rape legal. Some are trying to keep abortion legal. You are opposed to abortion — I know that and appreciate that. And you know that it is the killing of a person. So let’s oppose it, and let’s oppose rape, and let’s be sensitive to your pain, and let’s be sensititve to the pain of the child, and let’s be sensitive to the pain of the mothers and fathers and other family members who have lost someone to abortion — and let’s be sensitive to one another and start communicating rather than trying  to generate “viral” online attacks on each other. Patheos, lead the way. 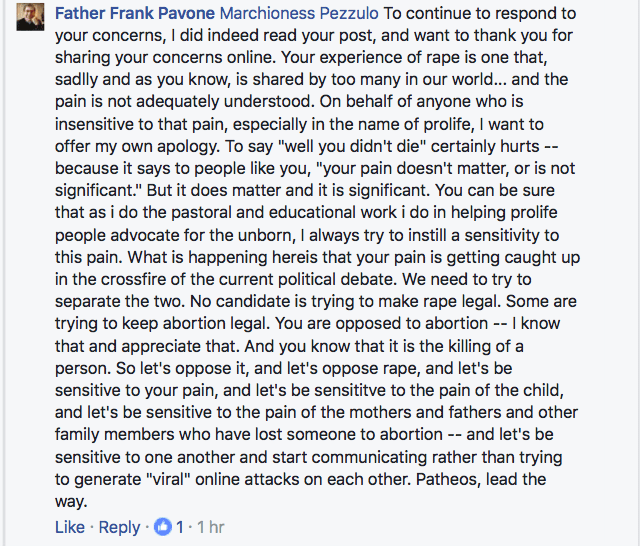 Father Frank’s reply generated swift backlash by some Catholic members of the online community. For example, one user commented; “In the midst of his sudden burst of sensitive words, Fr Pavone manages to accuse [Mary] Pezzulo of only being interested in blog traffic, and to take a gratuitous swipe at Patheos. How about leading the way by refusing to support a sexual predator?”

It is not clear whether Pezzulo has seen Father Frank’s reply at the time of this update.

You can continue to see the whole thread here: 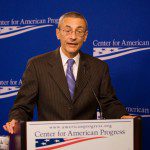 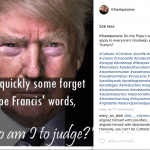 Avoid Universalizing Private Devotions And Cultural...
A Little Bit of Nothing
Related posts from Proper Nomenclature 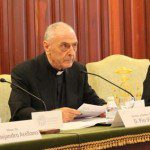