Gun Violence and the Religious Nones: If Family is the Remedy, What Assaults the Family?

Gun Violence and the Religious Nones: If Family is the Remedy, What Assaults the Family? December 5, 2015 Keith Michael Estrada

This isn’t a new song. Quite a while before John Paul II spoke on these matters, other Catholics connected the family and capitalism.

It cannot be too often repeated that what destroyed the Family in the modern world was Capitalism. No doubt it might have been Communism, if Communism had ever had a chance, outside that semi-Mongolian wilderness where it actually flourishes. But, so far as we are concerned, what has broken up households and encouraged divorces, and treated the old domestic virtues with more and more open contempt, is the epoch and Power of Capitalism. It is Capitalism that has forced a moral feud and a commercial competition between the sexes; that has destroyed the influence of the parent in favour of the influence of the employer; that has driven men from their homes to look for jobs; that has forced them to live near their factories or their firms instead of near their families; and, above all, that has encouraged, for commercial reasons, a parade of publicity and garish novelty, which is in its nature the death of all that was called dignity and modesty by our mothers and fathers. – Cited by Artur Rosman at Cosmos The In Lost.

Marxist Communism has been condemned by Catholics for its destruction of family life. What then of capitalism, which creates an ever-growing proletariat ground down to such a level of insecurity and misery that decent family life is almost impossible? Probably we have all wondered about the dismal future of young people finishing school these days, with years of sterile learning behind them and no prospects of a job ahead. There are countless thousands of them well on in their twenties today who have never had a job and whose chances decrease as the years pass. Capitalism bars them from living by the fruits of the labor they would willingly give, and marriage is out of the question. Even if they have jobs, Catholic young people dare not assume the responsibilities of marriage because they “can’t afford a baby.” – Jan., 1936.

Without a doubt, even John Paul II saw how the family could be hurt in circumstances of thing, affluence, and consumer goods:

Behind an appearance of normality and peacefulness, masked even further by an abundance of material possessions, children are at times forced to grow up in dismal loneliness, without firm and loving guidance and a suitable moral formation. Left to themselves, such children usually find their main contact with reality in television programmes which often present unreal and immoral situations which they are still too young to assess properly.

It is no wonder if this kind of widespread and pernicious violence also has its effect on their young hearts, changing their natural enthusiasm into disillusionment or cynicism, and their instinctive goodness into indifference or selfishness. When young people chase after false ideals, they can experience bitterness and humiliation, hostility and hatred, absorbing the discontent and emptiness all around them. Everyone is well aware of how childhood experiences can have profound and sometimes irreparable consequences on an individual’s whole life. – 1 Jan., 1996.

Look at the consumer culture, instituted by capitalism, its effect on the young and on the family, and how Saint John Paul II finds violence to be a consequence in the quote above.

Thomas Merton, who like Dorothy Day, received praise from Francis during his address to a joint session of congress, would sum up the lethal nature of capitalism, that is, its destruction of culture, marriage, family – indeed, communion –  as follows:

It is true that the materialistic society, the so-called culture that has evolved under the tender mercies of capitalism, has produced what seems to be the ultimate limit of this worldliness. And nowhere, except perhaps in the analogous society of pagan Rome, has there ever been such a flowering of cheap and petty and disgusting lusts and vanities as in the world of capitalism, where there is no evil that is not fostered and encouraged for the sake of making money. We live in a society whose whole policy is to excite every nerve in the human body and keep it at the highest pitch of artificial tension, to strain every human desire to the limit and to create as many new desires and synthetic passions as possible, in order to cater to them with the products of our factories and printing presses and movie studios and all the rest. – The Seven Story Mountain

It doesn’t take a Christian to realize that capitalism is an assault on the family. It takes just a small bit of thought to come to these conclusions. You don’t have to be pope or a prolific Catholic writer or spiritual master.

You can be wrong about a lot of things, especially about the solution to many of our problems, while still coming to understand where the problem can be found:

The bourgeois clap-trap about the family and education, about the hallowed co-relation of parents and child, becomes all the more disgusting, the more, by the action of Modern Industry, all the family ties among the proletarians are torn asunder, and their children transformed into simple articles of commerce and instruments of labour. – Manifesto of the Communist Party, Feb., 1848.

We should be concerned to hear Pro-Family rallying cries that are not accompanied by due attention to our prevailing economic system, that is, capitalism, as such. Violence, poverty, inequality, materialism, consumerism, hedonism: both anti-family and a consequence of capitalism – so why not tackle capitalism?

I suppose I forgot to tie this in, more explicitly, to atheism and materialism found with religious nonery. Next time, next time… 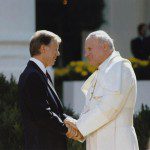