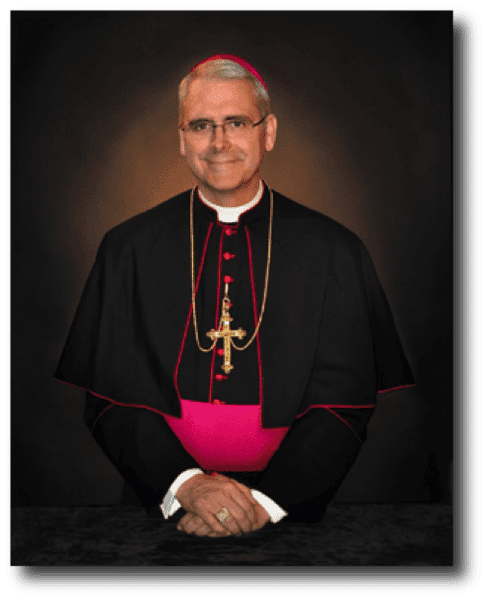 Archbishop Paul Coakley announced today that the consecrated host at the center of the Archdiocese’ lawsuit against a satanic group has been returned.

This happened as a result of a court order issued in response to a lawsuit brought by the Archbishop against the group. The Archbishop filed suit after leaders of the group made a number of comments claiming that they had obtained a consecrated host and planned to defile and desecrate it in a satanic ritual.

Archbishop Coakley expressed continued concern about the “dark powers that satanic worship invites into our community and the spiritual danger that this poses to all involved in it, directly or indirectly.”

For that reason, he will lead a Eucharistic Holy Hour at 3 pm, September 21 at St Francis of Assisi Church, 1901 NW 18 in Oklahoma City at the same time as the black mass is scheduled to occur.

OKLAHOMA CITY (Aug. 21, 2014) – Archbishop Coakley announced Thursday that the consecrated Host at the center of a lawsuit filed in Oklahoma County District Court has been returned.

An attorney representing the head of the satanic group presented the Host to a Catholic priest Thursday afternoon. The lawsuit sought return of the Host following multiple public statements by the head of the local satanic group that they planned to defile and desecrate the consecrated Host during a satanic ‘black mass’ scheduled next month in Oklahoma City.

With the return of the Host and an accompanying signed statement from the satanic group leader that the group no longer possesses a consecrated Host, nor will they use a consecrated Host in their rituals, the archbishop agreed to dismiss the lawsuit with prejudice.

“I am relieved that we have been able to secure the return of the sacred Host, and that we have prevented its desecration as part of a planned satanic ritual,” said Archbishop Paul Coakley of the Archdiocese of Oklahoma City. “I remain concerned about the dark powers that this satanic worship invites into our community and the spiritual danger that this poses to all who are involved in it, directly or indirectly.”

Archbishop Coakley has made repeated requests for the city’s leaders to cancel the satanic ritual in a publicly funded facility.

“I have raised my concerns … and pointed out how deeply offensive this proposed sacrilegious act is to Christians and especially to the more than 250,000 Catholics who live in Oklahoma.”

On Sept. 21, the day the satanic ritual has been scheduled, the archbishop invites the Catholic community as well as all Christians and people of good will to join him in prayer for a Eucharistic Holy Hour at 3 p.m. at St. Francis of Assisi Church, 1901 NW 18, followed by an outdoor Procession and Benediction.

“For more than 1 billion Catholics worldwide, the Mass is the most sacred of religious rituals,” the archbishop said. “It is the center of Catholic worship and celebrates Jesus Christ’s redemption of the world by his death and resurrection. We are grateful for the gift of the Eucharist and pray that this threatened sacrilege will heighten our appreciation and deepen our faith in the Lord’s Eucharistic presence among us.”

August 21, 2014
Richard Dawkins on Down's Syndrome Babies: "It Would be Immoral not to Kill Such a Baby in an Abortion"
Next Post

August 22, 2014 ISIS Demanded $132 M for James Foley. When They Didn't Get It, They Beheaded Him.
Recent Comments
60 Comments | Leave a Comment
Browse Our Archives
Follow Us!

Apologetics = Anti-Faith or Absolute "Certainty"?
Or, "Does Christianity Reduce to Mere Philosophy or Rationalism?" There seems to...
view all Catholic blogs
What Are Your Thoughts?leave a comment