We Can Convert this Culture. The Only Thing Lacking is Leadership.

We Can Convert this Culture. The Only Thing Lacking is Leadership. September 9, 2015 Rebecca Hamilton

We can convert this culture. The only thing lacking is leadership.

That’s my take in a post I wrote for the National Catholic Register on two of the most recent polls about the Catholic Church in America today.

… The trouble with “opinion” polls is that interpretation of the results rests in the hands of the interpreters. That’s why a recent poll that indicated that fully 90% of Catholics approve of the Pope, and a whopping 89% of Catholics also approve of their Church, received a headline from the Washington Post announcing that “The vast majority of US Catholics who left the Church can’t imagine returning.”

Their bias is showing.

I look at the same polls that Catholic bashers mine for nuggets to throw at the Church, and I see attitudes, situations and off-the-cuff reactions to disparate realities. I also see enormous opportunity for conversion of this culture.

The poll I cited earlier was a recent poll conducted by the Public Religion Research Institute. Pew Research Center released another, slightly different, poll showing much the same results. The emphasis of the poll by the Public Religion Institute was the impact that the so-called “Francis Effect” was having on American Catholics. The Pew Research poll was mostly focused on Catholic attitudes about family.

It’s impossible to create parallels between the two polls because their respective definitions of “Catholic” are so different from one another. The Pew Research poll opens the spigot wide, noting that up to 45% of the American population is in some way “connected” to the Catholic Church.

The poll also reveals that 90% of American Catholics believe that the best family situation for raising children is “a household headed by a married mother and father.” I’m not sure what slice of their sampling they used to get this number. Was it everyone they consider Catholic? Or was it just regular Mass-going Catholics?

Pew Research basically defines anyone as a Catholic who says they are Catholic. This includes people who haven’t been inside a Catholic Church in decades right alongside those who attend daily Mass.

But whatever sampling they used, that is a powerful percentage. 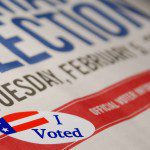 September 10, 2015 Kim Davis: Is This the Beginning of a Judicial Dictatorship?
Recent Comments
6 Comments | Leave a Comment
Browse Our Archives
get the latest updates from
Public Catholic
and the Patheos
Catholic
Channel
POPULAR AT PATHEOS Catholic
1

6 responses to “We Can Convert this Culture. The Only Thing Lacking is Leadership.”