No Matter What the Synod Does, I Will Keep on Doing What I’ve Been Doing

No Matter What the Synod Does, I Will Keep on Doing What I’ve Been Doing October 21, 2015 Rebecca Hamilton

Conscience is a weak reed on which to lay the foundation of your eternal destiny.

I know from personal experience that I can convince myself of anything. I also know that I am not the only person with this problem. In fact, I would guess that this ability to justify oneself to oneself is part of the universal human condition.

The truth is, people cannot do that which they cannot justify to themselves. I have no doubt that Hitler had justifications that worked for him for everything he did. Ditto for Pol Pot, John Wayne Gacy, abortionists and corporatists alike.

They all manage to justify what they do, at least to themselves. The rapist’s “she asked for it,” works perfectly fine to allow him to sadistically degrade, brutalize and harm another person, just as the corporatists’ blather lets their greed fuel wars, create poverty and destroy hope.

I learned a long time ago that nothing makes a person meaner than being challenged on their self-justifications. The worse the thing they are justifying, the meaner they get when the justification is challenged. Thus we have men who beat their wives yelling “You made me do it!” and following that with another blow to silence any challenge to their justification. We have nations going to war rather than treat their own citizens as full human beings.

Nothing makes a person meaner than telling them they cannot kill somebody they’ve decided it is their right to kill. If you try to confront them with the reality of what they are doing, they become dangerous to you, as well.

The one thing you cannot rely on to make them change their behavior is the whispering of their own conscience. Conscience is an unworkable guide precisely because conscience is so easily shaped by the forces of self interest and human weakness. Perhaps the number one human weakness that damages conscience is the desire to be accepted and liked by the people around us.

That weakness works against good judgement and right conscience in an insidious and steady sort of way. It is buttressed by sophisticated arguments that excuse virtually anything. Today’s advocates for dissolute living are skilled in making good sound bad and bad sound good.

They can and do convince people that everything from killing grandma with euthanasia to dismembering our children with abortion is a positive good. Our conscience is no defense against them unless we have a reliable touchstone by which to judge and evaluate what we are hearing.

For two thousand years, the Catholic Church has provided that reliable touchstone. For two thousand years, the Church has held fast in its teachings and dogma. Individual priests and bishops have been all over the map in their moral teaching. They are all over the map right now on the core challenges facing modern Christians. But the Church itself has never taught that which is not true. It has not deviated from following Christ and Him crucified.

That is why so many Christians found the discussions at last year’s Synod disturbing. That disturbance is why they are distrustful of this year’s Synod. They become restive when Synod fathers talk about allowing individual conscience to be used as a guide for when it’s ok to ignore grave sin because they know — we all know — that our own consciences can lead us straight down the road to perdition.

We need a Church that we can trust to present us with Jesus Christ, Who is the same yesterday, today and forever. We do not need and will not benefit from theological experimentation that runs perpendicular to the explicit teachings of Our Lord and of Scripture.

Jesus said, For this cause a man shall leave his mother and father and join with his wife and they two shall become one flesh, so that they are no longer two, but one. What therefore God has joined together let no man put asunder … anyone who divorces … and marries another … commits adultery.

He was speaking directly and explicitly about the question of divorce, which he said Moses had allowed due to the Israelite’s hardness of heart. Marriage is between one man and one woman and it is for life. Period.

St Paul said, … whoever eats the bread or drinks the cup unworthily shall be guilty of sin against the body and blood of the Lord … and brings judgement upon himself.

These teachings put a crimp in things for a lot of people these days. If they are true, then a great many men and women are living in adultery. If they are not true, then the Scriptures themselves are false.

People don’t like hearing things like that. They want Jesus. They know they need Him, and they want Him. They crave communion with the Lord, and Christ in the Eucharist is the best and easiest way to achieve that.

They are good people. Many of them repent of their mistakes and are trying to do better. Divorce is a scalding experience that wounds people to the core. That’s because marriage is exactly what Jesus said it was; the binding of two people together as one for life. Tearing that apart is painful beyond pain.

There are often serious reasons for divorce. Violence, infidelity, drug and alcohol abuse are not fixable unless the offender is committed to changing. The only thing the victim spouse can do is end the marriage and try to rebuild.

That is why the Church has developed the process of annulment; to determine if the marriage was invalid. It lets people move forward.

This is a thorny subject for the Church right now precisely because certain bishops are pushing to place Christ’s teaching on a shelf and ignore it in actual practice. They want to say that Jesus said what He said, and the Church is not changing doctrine, but it will ignore the doctrine in its pastoral life.

To my way of thinking, this is inherently dishonest. It also sets the Church on the path of unraveling the cords that bind it together. The Catholic Church is the Eucharist and the Eucharist is a sacrament.

If the sacrament of Holy Matrimony can be dismembered into a meaningless nothing that has no actual power in how people live their lives, and the core meaning of the Church, which is the Eucharist, can be taken by force and popular demand, then the Church itself has come unwound.

I do not understand anyone who would take the Eucharist by force. I do not.

Why would anyone take communion when they know they are in mortal sin? Do they think that Jesus can be fooled? Do they think they can lie to Him and He won’t notice? Why would a bishop deliberately lead people into doing this? Doesn’t the bishop fear God?

I understand full well that much of the arguing in the two Synods has been a manifestation of the culture wars raging in the Western world. I believe that a number of politico-socio movements, including the gay rights movement and the new atheism, have a vested interest in tearing down the Church’s teaching.

The fact that so many secular interests perceive the Synod as something they can influence to act in ways that are contrary to 2,000 years of Church teaching says a lot about at least some of the bishops who are meeting there. The other fact, that so many faithful Catholics who have stood by the Church through all the wounds she has inflicted on herself in the past 15 years, are deeply mistrustful of the Synod, says a lot about the danger that lies within the Church if such a change is made.

If the Synod Fathers accede to pressures from the German bishops to radically change Church practice on marriage in these fraught times, they will make the Church the pawn of special interests.  At the same time, they will alienate many of their most faithful followers.

They don’t seem to understand the synergy at work here. To put it simply, a decision to change Church practice would comfort the Church’s enemies, including those who seek to destroy faith altogether. It would, at the same time, alienate and create confusion and mistrust among those who ardently try to follow the Church. It would weaken the loyalty of the people the Church must turn to for help when it is attacked.

I pray about the Synod, but one thing is absolute: No matter what happens with these bishops, I will not leave the Church. To paraphrase St Peter, where would I go?

What I will do is read whatever the Synod produces carefully and prayerfully. Then, I will think about it. I imagine I may go through this read-pray-think process more than once. If the Church wounds itself with unsound practices, I will pray for wiser minds to undo this mistake in the future.

Whatever the Synod does, I plan to keep on doing what I’ve been doing for quite a while now. I will do my best to follow Jesus within the confines of the Catholic Church. 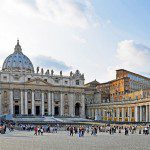 October 22, 2015 He's Out! Bishop Laicizes Priest Who "Came Out" on Eve of Synod
Recent Comments
3 Comments | Leave a Comment
Browse Our Archives
get the latest from
Public Catholic
Sign up for our newsletter
POPULAR AT PATHEOS Catholic
1

School district 214, school reopenings, transparency, and trust
Let's start with the fact that I've written on the topic of...
view all Catholic blogs
What Are Your Thoughts?leave a comment

3 responses to “No Matter What the Synod Does, I Will Keep on Doing What I’ve Been Doing”