Last night, it was the beginning of the end for AMC’s Mad Men: a show famous for the sex, the women, the glamor of the 1960s. A show so tightly dialogued and shot that we will be unpacking its richness for many years to come. A show about an era in the process of dying, about a man (Don Draper) desperately clinging to his relevance by the edge of his fingernails, about a very flawed man trying to find meaning and happiness…and yet, ultimately, a show about being deeply, existentially lost.

Christians are famous for talking about the emptiness of a life outside of God. Sometimes this is elucidated in a way that does not carefully acknowledge the goodness of God’s creation and the reality that the beauty of His image peers through every human form. Sometimes it reduces people to one dimension (saved or not? good or bad?), instead of acknowledging that in this world, we will find the beautiful and the broken in everyone. We see the beautiful in Don Draper (portrayed brilliantly by Jon Hamm). We see a character who is hurting, who wants to do better, who at least loves his children in his own way. We see his longing for connection, even as he constantly engages in self-defeating behavior. We see hints of something real now and then. But we also see an unrelenting brokenness. In Don, this means the inability to commit to a woman and live in the deepening intimacy of faithfulness. His yawning inner emptiness drives him. When the series began, some envied Don his ability to bed many beautiful women. He was handsome and smooth and visionary. He might be an ad man, but he was also an artist. He was mysterious and magnetic. What man wouldn’t want to be him?

But as time went on and we came to know Don better and better, it became harder and harder to envy him. Don need never be physically alone, but he is perhaps the most existentially alone character in the history of television. Desperately, desperately alone. Emotionally stunted. Incapable of connection. And ontologically broken, despite the good traits that have us rooting for him to overcome his demons and flaws.

In a 2011 interview with NPR, actor Jon Hamm told Fresh Air‘s Terry Gross about a key principle of the show:

Mad Men does this amazing thing. Many television shows allow their characters to behave in salacious, sensational ways for the vicarious pleasure of the audience while never really taking seriously the long-term consequences of such actions. Mad Men is different because it shows us that when we act in a way that is consistent with brokenness and not wholeness, those acts have long-term effects on our ontology, on our relationships, on our world. This is not because of some Christian judgmental view of the world. This is because of the nature of reality.

Mad Men takes sin, that old-fashioned word, seriously. Though of course it does not conceptualize sin in the sense of any one particular religion, I would venture to suggest that the show’s concerns are focused on some of the same questions as religions are: Who am I? Why am I so flawed? Why are other people flawed? Why am I held captive by my flaws? Why do I have every earthly pleasure and yet suffer despair? What is the meaning of life? What can I possibly pass on to my children? 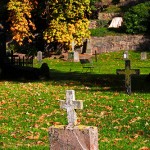 April 8, 2015 Runaway Radical: A Young Man's Reckless Journey to Save the World
Recent Comments
0 | Leave a Comment
Browse Our Archives
get the latest from
Evangelical
Sign up for our newsletter
POPULAR AT PATHEOS Evangelical
1