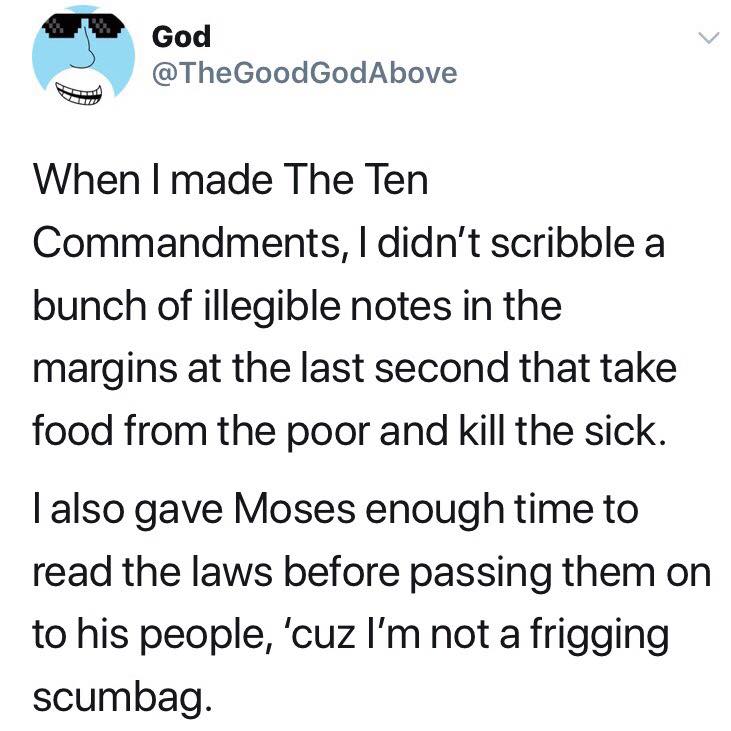 When the above meme was drawn to my attention, I felt I had to share it. The contrast between biblical laws and the Republican tax bill is even starker than the meme from Facebook God indicates. The Torah in fact imposes taxes and tax-like practices that redistribute wealth to those in need, including returning land to its earlier owner once a generation. We need more memes like the one above, because there are apparently large numbers of people in the United States who pay lip service to the Bible but have no idea what it says.

For more on the relevant laws, see the great Twitter thread from Rabbi Danya Ruttenberg:

If the Bible is so against systemic solutions to poverty, why is a jubilee year declared that releases people from debt to alleviate intergenerational poverty? What is leket, skikhah, pe’ah, and maasar if not taxes meant to create a safety net for those in need? 1/ https://t.co/NmHs3NMrld

But of course, the only way to pull things like what Republicans have with the recent tax bill is precisely to have a voting populace that do not know the details either of the law or of their religious values. And so is it any surprise that the law also takes aim at education, too?

The Talmud (Sanhedrin 109a) paints Sodom in even starker terms, suggesting that their selfishness and greed caused them to impose something akin to immigration and travel bans. In one place, the Talmud conjectures that the people of Sodom said to themselves, “Why should we suffer wayfarers, who come to us only to deplete our wealth. Come, let us abolish the practice of traveling in our land….” I’m sure they would have built that “big, beautiful wall” if they could have.

On that same folio in Sanhedrin (109b), the Talmud posits that the Sodomites developed an elaborate ruse to exploit the poor under false pretenses. “If a poor man happened to come there,” it reads, “every resident gave him a denar [coin], upon which he wrote his name, but no bread was given [that is, the store owners recognized such coins and refused to accept them]. When he died, each came and took back his [denar].” Hmmm, an elaborate ruse constructed to give people the sense that they’re being cared for, but in the end, reflects a staggering lack of empathy for their health and well-being? A system designed to enable the wealthy to get rich off the suffering and death of the poor? I can only imagine that the Speaker of the Sodomite House would have been impressed with Paul Ryan’s tenacity and determination to pass a Trumpcare bill that is, against all odds, even worse for Americans than its previous iteration.

The situation in our country right now is exceedingly dire. We are in a state of moral emergency, as some of the worst crimes Judaism could imagine are becoming public policy — and becoming normalized. Many people will likely die as a result of the policies of this administration, and many more will be plunged into a deep, irreversible level of poverty. Hungry people will not be fed. The bread of massive corporations will be hoarded, and only the most symbolic of tokens — ultimately useless, ultimately irredeemable — will be offered to those desperate for sustenance and care. It’s bad, and it’s going to get worse as the months go on…

See also my previous posts related to biblical laws and economics, such as:

The Poor You Will Always Have With You

A Year of Living Justly 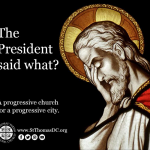 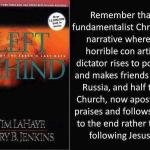 December 5, 2017 Donald Trump as Antichrist
Recent Comments
7 Comments | Leave a Comment
"This seems a very strange comment, one offered as though completely unaware of things I’ve ..."
James F. McGrath Elephantine, Leontopolis, and Gnosticism
"This article includes one remark warrants emphasis. "...there’s much more to be done if this ..."
Dan G Elephantine, Leontopolis, and Gnosticism
"This is genuinely fascinating, but as an inveterate nerd, I must ask -- where's the ..."
Spirit Plumber Guest Lecture and Academic Minute on ..."
"Yes, I agree. Technical arguments which supposedly prove (or disprove) the Resurrection are a waste ..."
David M Copycat Anti-Religion
Browse Our Archives
Follow Us! 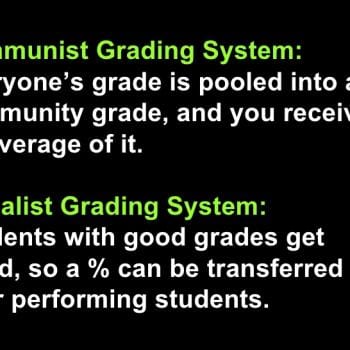 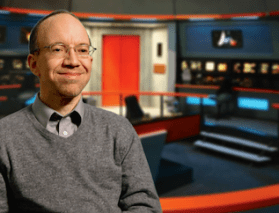 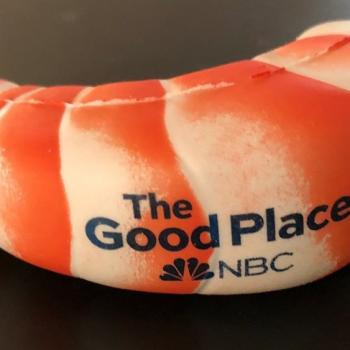