I actually had a draft post for a while, planning to blog about hell and Jesus, which was called “Christians approach hell (and Jesus) from different angles.” But then the image below came my way via Facebook, and it not only prompted me to return to the subject, but seemed to deserve to be the starting point for the post. What do you think? Was that the right choice? 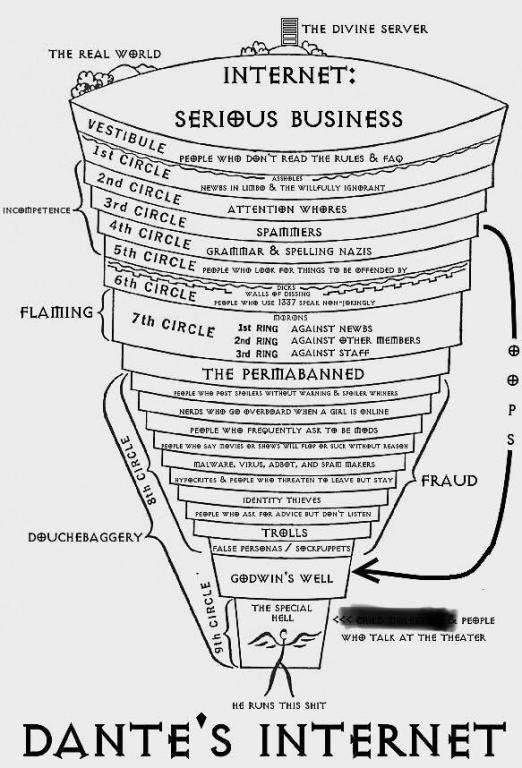 I think that the above actually illustrates nicely the way our ideas about sin, evil, and wrongdoing, and our ideas about punishment fitting for such things, change over time. I suspect that many people are more upset by internet trolling than by other things for which Late Antique and Medieval writers consigned people to the nether regions of outer darkness.

The thing that sparked my desire to blog about this topic was Ian Paul’s post, “Is It Time To Forget About Hell,” in which he responded to my suggestion that we might reject a view that Jesus held about a topic such as this one. He wrote very briefly about what I wrote in my own post:

That’s a perfectly legitimate approach to take—but it is not a Christian approaching to reading the New Testament, in that it bears little or no relation to historic Christian belief as expressed in the Creeds.

Now, to be fair, the blog post that I wrote, to which he was responding, was called “Was Jesus Christlike?” and so was intentionally provocative. But the more basic underlying reality is something that ought to be widely acknowledged. Jesus, as a human being, held views about the human body, plant seeds, the cosmos, and other subjects related to what we call the natural world which reflect his time and culture. If someone cannot acknowledge that, they are denying that Jesus was genuinely human.

This is controversial only because of the doctrine that Jesus was sinless, and the view that being wrong is itself somehow sinful. Perhaps that is correct, since our wrong beliefs typically reflect widespread assumptions that are based on inadequate or misunderstood information, and about which we really ought to say, if we are honest, “we don’t know,” and yet we wrongly think that we do. Is that “sin” and if so, could Jesus be entirely exempted from such aspects of human existence without it entailing a denial of his humanity?

For many progressive and liberal Christians, the idea that Jesus was “sinless” simply isn’t an issue, because we don’t think of Jesus as a pre-existent divine figure striding the Earth, and it is typically in connection with that view of Jesus that the idea of his sinlessness is important.

This gets really interesting when we bring into the picture something that another progressive Christian and Patheos blogger, Benjamin Corey, wrote on his blog:

It strikes me that American Evangelicalism invented an entirely new version of the Christian religion with its own concept of “salvation,” and the consequences of this religion are dire. It has taken the message of Jesus and the biblical mandate to pattern our lives after Jesus, and in so many was reduced it to the near-effortless act of “accepting Christ into your heart.” In fact, it’s become a bizarre religion where one can actually refer to themselves as a Christian while simultaneously disagreeing with what Jesus taught.

That’s not how this thing was originally supposed to work, folks. If one disagrees with Jesus, the word Christian ought not apply.

In context, Ben is focusing on the willingness of many American Evangelicals to disregard the ethical teaching and example of Jesus. But no one adheres to the moral commands of Jesus literally any more than they do to Jesus’ views of the natural world. I am thinking not only of what might be judged clear hyperbole – if a part of your body causes you to sin, cut it off – but also of the command to renounce all our possessions, about which we are told in Luke 14:33 that no one who fails to do so can be Jesus’ follower.

And so perhaps (as I discussed in an earlier post) we’re “all going to hell” since we fail to adhere to what Jesus taught. But perhaps instead we need to recognize that none of us is able to or even supposed to think, speak, and act in precisely the way Jesus did; that this leaves us uncertain about what we are supposed to do; and that this is a reason for religious people to have attitudes of humility and reliance on God rather than on our understanding of and adherence to the teaching of Jesus.

Perhaps, in fact, that is itself one of the answers to the question “What would Jesus do?”

I would end it there, but someone would inevitably accuse me of backtracking or contradicting myself with that last sentence. And so let me emphasize that there are, indeed, two different kinds of Christians, as Ben Corey suggests. But they aren’t those who emphasize intellectual response versus one that is outwardly visible in a way of life. Rather, they are those who think we are supposed to adhere precisely to rules, doctrines, and other things that are taught and described in the Bible, versus those who recognize that the most “biblical” or “Christlike” thing to do may be precisely to apply a biblical principle in a manner that no one in the Bible applies it, even in a way that perhaps undermines a longstanding practice or tradition.

See further Lee M’s post that offers a “gut-check” on the subject of hell. In it he writes, “Jesus might have said, if you who are wicked, would never condemn your children to everlasting, conscious torment, how much less would your Father in heaven dream of doing such a thing?” See too Matthew Distefano’s post with challenging questions for those who believe in hell. 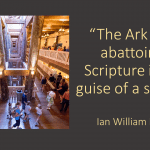 February 15, 2018
Ark Encounter is not a Shrine of Scripture
Next Post 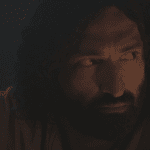