I recently had the opportunity to make a guest appearance on the program at a conference about Batman that took place at Bowling Green State University.  I call it a “guest appearance” because I was not originally slated to be on the program, but after a good friend of mine had to cancel after he was already on the draft program, we were able to arrange for a substitution. I thus focused on engaging with his work on the subject of Batman as Nietzschean Übermensch. Matt Brake then responded, making the case that the Joker better fits that category.

The session after ours was going to feature podcaster Christopher Maverick (who goes by “Mav”) and Mav kindly agreed to record my presentation and Matt’s. Thanks to him, you can listen to this session as this week’s episode of the ReligionProf Podcast.

In addition, you can listen to Mav’s podcast from the conference, “The Unbearable Whiteness of Being Batman,” on his Vox Populorum Podcast. You can also listen via the Christian Humanist Podcast. For more general information about that event, do take a look at Bob Cunningham’s piece on the BGSU website about it, and then for more detail check out Stella Bowman’s podcast and Trey Jackson’s recap.

On my way to the conference, I brushed up on the history of Batman by listening to an audiobook in the car: Glen Weldon’s The Caped Crusader. I highly recommend the audiobook – the way voices of fans and others are done makes the book all the more entertaining!

On the next page, I’ll share some photos from the venue, the William T. Jerome Library building at Bowling Green State University, which also houses the Ray & Pat Browne Library for Popular Culture Studies as well as the Music Library & Bill Schurk Sound Archives. We were given a behind-the-scenes glimpse of the popular culture collection, which is not browsable, items instead having to be located through the catalog and then access requested, and so this was a very special privilege indeed. 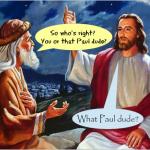 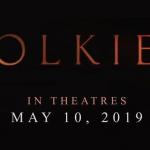 May 2, 2019 Review of Tolkien (2019)
Recent Comments
7 Comments | Leave a Comment
"You Da man! Did exactly what u said and it took care of the problem. ..."
Jose Beiro Solving the Annoying Flashing Input Menu ..."
"It's what I tend to call a classic Irregular Verb:I am a true patriot.You are ..."
Scurra White Supremacy, Christianity, and the Capitol ..."
"Intriguingly enough, since you mentioned "No one has suggested that Jesus was merely a carbon ..."
Chris H #JohnTheBaptist Enoch Seminar Nangeroni Meeting Day ..."
"Bestest post,..... My daughter who is incapable of being on the internet due to genetics ..."
davidt Evil In the Youth Group
Browse Our Archives
get the latest from
Religion Prof: The Blog of James F. McGrath
Sign up for our newsletter
POPULAR AT PATHEOS Progressive Christian
1