There are things I’ve said in the past about this topic that are worth sharing again, I believe. Here I compile some things from a number of posts. First:

Fundamentalist interpretation of the Bible should never be referred to as “Biblical literalism” since it only insists on the Bible being literally true when it is desirable to do so, and not where it is “obviously” a metaphor, such as the dome over the Earth, or in its teaching about gluttony or giving up all your possessions. Calling the fundamentalist view “Biblical literalism” makes it seem as though they have a high ground of sorts, however dubious it might be. But it is not as though they are being consistent while others are not. Quite the contrary. Indeed, that fundamentalists have managed to convince so many people (including themselves!) that they are in fact “Biblical literalists” deserves to be acclaimed as one of the greatest PR exercises in modern history.

As a liberal Christian, while I am always willing to consider the possibility that the ancients were using metaphors in a particular instance (they were capable of doing that, you know), even so in some instances the Bible is clearly wrong. A failure to admit that is not to uphold the Bible’s authority, but to reject the real-life Bible we have, and substitute in its place an imaginary one which is said to be inerrant, with the help of smoke and mirrors and a sincere hope that no one looks too closely at the claim or the evidence.

It is interesting how some modern readers simply assume that ancient individuals and authors shared their supposed literalism, and their focus on facts and history and science, all of which are thoroughly modern concerns.

It is time to make clear to the world that the situation is not one of faithful Biblical literalists and then others who are compromising “sort of” Christians. If anything, the situation is one of progressives who are seeking to continue the dynamic interplay between tradition and novelty to which the Bible and the entire history of religion (not just Christianity) bears witness, and people who deceive the gullible into first believing, and then pretending, that they are being faithful in ways that they aren’t, at least not consistently.

The approach to the Bible and to ones own thinking that falls under the label of “biblical literalism” is not merely misguided, but downright sinful, a form of idolatry, an act of human hubris which is all the more heinous because, in the very act of setting themselves up as sources of divine truth, they claim to be achieving a superior level of submission to God than others have.

This is why I bristle whenever I hear someone refer to “biblical literalism,” even when they are referring to the views held by others and not by themselves. There are no genuine biblical literalists. That anyone has been persuaded otherwise is the result of a powerful and deceitful PR campaign by fundamentalists. And what bears the label “biblical literalism” is not only nothing of the sort, but is in direct defiance of the Bible’s teaching about humility vs. arrogance, submitting to and relying on God vs. leaning on one’s own understanding, and countless other themes and teachings that run all throughout the pages of the Bible, which “biblical literalists” in the best of cases ignore, and in the worst, deliberately disobey.

On how Jesus and Paul interpreted Genesis:

If we look at what Jesus is depicted as saying about Genesis 2 in the Synoptic Gospels, he points to the story about God making two people out of one, and then goes on to talk (as Genesis does) about two becoming one flesh. Not literally being, but becoming. And then, even though it is a story that is literally about the rejoining of what God has cleaved asunder, the conclusion drawn is the opposite, that what God has joined no human being should cleave asunder.

That is not literalism. Quite the opposite, in fact. It is an interpretation that appreciates the story’s symbolism.

So too Paul illustrates his lack of interest in the literal details of Genesis 3. In that story, sin could be said to enter the world through two people. Yet Paul says in Romans 5 “by/through one man.” He is reading the Adam story a particular way, as a foil to the story of Christ.

Conservative Christians have long been engaged in a remarkably successful PR exercise to give the impression that they are the ones who are faithful to the Bible and historic Christianity. But in fact, what they conserve is an older but non-original form of Christianity as it came to be expressed in a particular historical and cultural context, which they have mistaken for (or deliberately misrepresent as) unchanging truth.

There Are No Scriptural Literalists

Literalists Have a Choice

Is That a Metaphor?

Quote of the Day – Are There Really Any Biblical Literalists?

Pete Enns on the Inconsistent Literalism of alleged “Biblical Literalists”

What Does The Bible Literally Say?

What Does “Biblical” Mean? 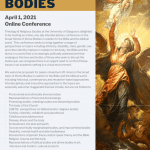 October 20, 2020 Happy Open Access Week!
Recent Comments
0 | Leave a Comment
Browse Our Archives
get the latest from
Religion Prof: The Blog of James F. McGrath
Sign up for our newsletter
POPULAR AT PATHEOS Progressive Christian
1