This post is an effort to back up and ask about the roots of the worldview and subculture that led to the Capitol insurrection in Washington DC. It has become clear from numerous examples that it is not the Christian character or use of scripture that leads Republican Trumpists who claim to be Christians to oppose all things Democrat, at times violently. John Fea noted how frequently Barack Obama quoted scripture, and that Joe Biden may outdo him on this front:

When it comes to presidents quoting scripture and spiritual writers, Joe Biden may surpass Barack Obama

One can talk about theologies and conspiracy theories, and they are certainly part of the picture. The question is what is symptom and what is cause, or more precisely the primary or dominant cause and motivation for what we are seeing. For instance, what can explain the fact that Republican religious people say that Democratic religious people are anti-religion when there is such abundant evidence to the contrary? Rev. Raphael Warnock is but one recent example.

Evangelicals have long been prone to conspiracy theories, and I’ve suggested some reasons for that here on the blog. But what motivates the adopting of this outlook?

As someone who has had the experience of being born again and did so in a church context that reflects the outlook I’m talking about here, I want to acknowledge how the one could contribute to the other. Experiencing the sense that a burden one has long carried has been taken off one’s shoulders, that the missing piece of life’s puzzle that one was seeking one has now at long last found, reshapes everything else. The context in which that experience occurs is not necessarily crucial to having the experience itself, I later realized. I was visiting the church in question for only the second time, for a morning service, after attending an evening concert there the night before. But the community where one has the experience nonetheless is instinctively given a lot of authority and influence to shape how one interprets that experience and what its implications are.

In that church we were warned about cults, the importance of not compromising, and the dangers of backsliding. Each of those deserves unpacking. I recently asked someone who talked about Evangelical Trumpism as a “cult”: Don’t you find it ironic that the negative epithet “cult” was developed by these very churches as a way to label others? There was definitely an element of projection as well as deflection in how we viewed other religious groups as engaging in “brainwashing.” Having a backbone and conviction is a positive thing that I learned from this context, although I am sure I had some inclinations in that direction already. Too often liberalism is equated with a stance that says anything goes, one that rejects any expression of conviction, belief, or stance since that might exclude or merely offend someone whose values and perspective are different. Figuring out how to balance inclusive acceptance and strength of conviction (including about inclusivity) takes reflection and practice. The need to be uncompromising, on the other hand, is conviction taken to an extreme that is worse than counterproductive. Being unwilling to compromise about crucial matters is a strength. Being incapable of compromising about anything is a weakness. Many Republicans have seemed to be in the latter category lately. As for “backsliding” the notion of a slippery slope is one I’ve talked about often. The idea that one’s soul can be put in jeopardy by the slightest inattention can foster introspection and focus, but it also undermines any sense of depth and stability, the kinds of things that only come from maturity, whereas this fear of backsliding fosters stagnation in immaturity, since any change of mind is presumed to represent a departure from the “truth once for all received.”

None of these emphases is inevitable, nor is their application in an extreme fashion. The question thus remains of why this sort of culture was developed in the first place. One possibility worth exploring is that this is what happens when something that seemed anathema and unimaginable to me as a new born again happens: a culture of “bornagainism” is fostered and eventually becomes unmoored from its roots in the experience of being born again. As a Pentecostal in my teens in the wake of the life-changing experience I had, I not only took seriously the need to be bold and uncompromising in my faith. I also knew that my aim was to win the allegiance of others for Jesus. Our war was not against flesh and blood, but to save flesh and blood from the demonic systems and ways of thinking that held them in their grasp, just as I had been saved. But take away the experience and all you are left with is a community that fosters uncompromising dogmatism and an us vs. them worldview.

There’s more to this, however. My regional location mattered to my experience. I was in a diverse urban setting and a church in which obvious racism was, at the very least, the exception rather than the rule. Even when it appeared among some of the Italian-Americans who ironically had been discriminated against themselves not all that long previously, most even of their fellow Italian-American Pentecostals as well as others of us from different backgrounds were appalled and frankly horrified.

But elsewhere in the United States, where the dominant locus of Trumpism is to be found, the story is very different. My diverse urban “Yankee” experience is not what one can have in the regions where slavery and the Confederacy are the legacy. It was not a place where the gun culture found in rural areas and the south were to be found. Add racism and love of guns into the mix and what would otherwise be theologically and morally disturbing becomes dangerous not only for individuals but for society and the nation as a whole.

I think that the combination of a white supremacist culture with an Evangelical culture lacking genuine transformative spiritual experience may help explain some of the things we have seen recently. On the one hand, “stop the steal” has been another way of talking about “taking my country back.” In a democracy that is functioning properly, the country cannot be lost. It is always in the hands of the voting populace. The people who wanted to “take the country back” were almost entirely white cultural Christians who felt a loss of privilege as a result of increased racial/ethnic and religious diversity. The claims about voter fraud often focused on areas that were not predominantly white, and that was no coincidence. They wanted to take it back believing it rightfully theirs even if they are outvoted by those who do not look or think like they do.

In short, combine the culture of white supremacy with a culture of dogmatism that believes nefarious evil is at work behind current events, put guns in their hands, and one has the recipe for the Capitol mob. This isn’t to suggest that there was complete uniformity in the crowd that was rioting, both outside and storming the Capitol building. But I get a sense that this may represent the heart of it.

What do you think? I recognize I am viewing this in light of my experience, which as I have already indicated is somewhat removed from that of the rioters. I welcome your thoughts on my suggestions here.

Reasonable evangelicals need a new name.  As a voting bloc, evangelicals have, according to many of their leaders, fallen from grace.  Ironically it was the “draw”—whatever that could possibly be—of the cult of Donald Trump that caused it.  While encouraging their sheep to vote for him both in 2016 and 2020, some of these leaders had their eyes opened to what many of us saw from the beginning, but it took an insurrection to pry their lids apart.

Why Your Christian Friends and Family are Fooled By Conspiracy Theories

Jesus and the Capitol Hill Mob

There’s Video of Christian Terrorists Praying to God Inside the U.S. Capitol

What is In Your House?

Wheaton Faculty and Staff Speak Out

Christian Nationalism is Worse Than You Think

Deradicalization in the Deep South

James Dobson claims the Left has “ultimate power” as a result of “stealing the election.” Ironically, the Left would have more power than it will have under Biden if it were capable of stealing an election the way Dobson and others imagine!

The Beginning Of The End?

Conspiracy Theories, Alternate Reality, and the Perils of Totalitarian Religion

In Sermon, TX Pastor Says Trump Will Remain President (But Get Your Guns Ready)

‘Thou art the man’

What the Capitol insurgency reveals about white supremacy and law enforcement

The Future Of Trumpism

The Whole Story in a Single Photo

Riot on the Hill

Florida Church: Don’t Blame Us Just Because Our Members Joined the Capitol Coup

An Exceptional Situation: January 6 and the New State of Suspension

Christian Textbooks Are Already Rewriting the Obama and Trump Presidencies

Donald Trump just got impeached for the second time. How are the court evangelicals handling it?

Ten Republicans voted for the second impeachment of Donald Trump. At least three of them were evangelical Christians

Stupidity On Display: Where do we go from here?

Not the time for a call for unity

A Failed Insurrection and Two Impeachments, the Ending Legacy of the Trump Administration by Anjeanette LeBoeuf

Healing May Be The Death of Us

How are evangelical colleges are responding to the January 6, 2021 insurrection? 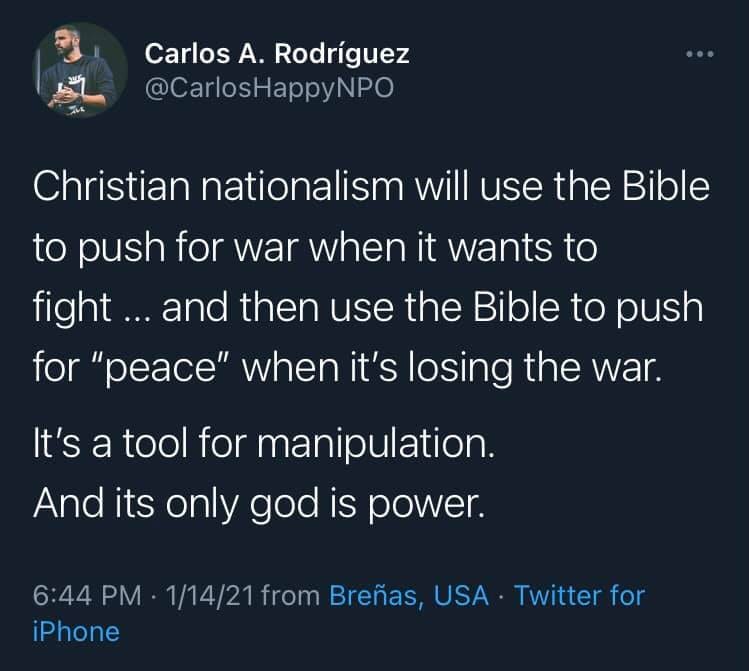 Hopefully all of this makes clear that the study of religion is crucial to making sense of what is going on in the world in our time. I will thus end with this wonderful quote from Dr. Anthea Butler that was shared on the AAR Facebook page: 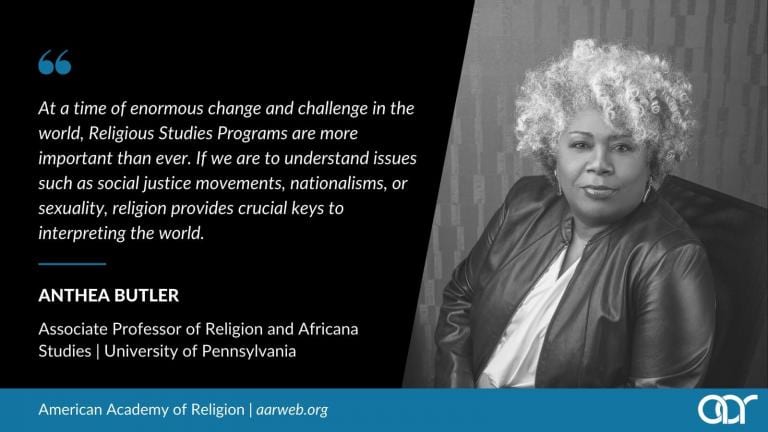 January 18, 2021 What Jesus Learned from Women Cover Art Revealed
Recent Comments
0 | Leave a Comment
Browse Our Archives
get the latest from
Religion Prof: The Blog of James F. McGrath
Sign up for our newsletter
POPULAR AT PATHEOS Progressive Christian
1