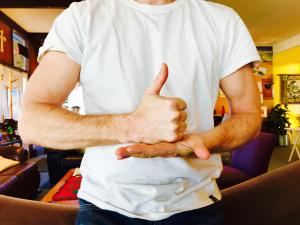 …Kerry Spencer taught both of her children to sign using American Sign Language before they could speak because she found it useful to be able to communicate with them when they were babies. However, she did not anticipate her son, Samuel, to use his skill to communicate that he did NOT enjoy the experience of sitting in a mall Santa’s lap. Samuel was just one year old when he used his baby version of ASL to sign “help” to his mom while the photographer at the Provo Town Center Mall in Provo, Utah, snapped his picture. “I was standing to the side when the pic was taken and actually didn’t see that he was signing for help until I saw the photo,” his mom told TODAY Parents.

…Cute. But this “fluff story” isn’t quite so fluffy. It provides a potent and helpful reminder of the origins for how Christianity got off track and became hijacked by legalistic jerks who were far more into dogma than actually loving people.

In the same way that certain macho Christians have invented a bogus mythology about the late Rev. Fred Rogers – creating memes spewing the lie that Mr. Rogers had been a Marine sniper and/or a Navy SEAL before launching his beloved TV ministry – certain hyper-macho Christian legalists have invented a bogus myth that good ‘ol St. Nick (the primary basis of Santa Claus) would’ve hated progressive Christianity and he was far more like the late “Rev.” Fred Phelps and his infamous Westboro Baptist Church than the plump and jolly elf we call Santa.

Saint Nicholas was born on March 15, 270 A.D. and he died on December 6, 343. Also called Nikolaos of Myra or Nicholas of Bari, he was Bishop of Myra, in Asia Minor (what we now call Turkey). Students of history will be aware upon looking at those dates that he was at the prime of his life during that time when the Roman Emperor Constantine allegedly “converted” to Christianity, issued a decree no longer outlawing that faith and ending its persecution, and then went on to declare it as being the official religion of the Roman Empire. Constantine was frustrated with the diversity and variety of Christianities that existed in that era, and he felt it would be good to simplify and codify things into an “official” form of the faith – a most un-progressive Christian thing to do. So far, all historically accurate.

Here’s where the bogus myth comes in. As some spin it, as a bishop, Nicholas played a key role in helping with this process of codification and he zealously called out Christian leaders who he felt didn’t toe this new dogmatic party line. He “called people heretics” and he even punched Arias in the face and had him thrown in jail. 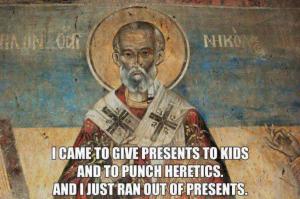 Now, if this were true, if that good bishop had actually done that, a case could be made that this act of violence, this ironically heretical violation of Jesus’s Way, teachings, and example, was the basis of the rise of so-called “Christian Just War Theory”, the “Christian” justification of capital punishment (death penalty), the Crusades, the Spanish Inquisition, bloodshed among fellow Christians during the Protestant Reformation, the witch hunts, and the Doctrine of Discovery, slavery in the Americas, the KKK, and the genocides committed by the Nazis.

Think about it. This would be ecclesiastically sanctioned violence. And the violence wouldn’t merely be the punch. It would be the gall to quash dissenting theological views within the Church – the living Body of Christ. It would be punching Jesus. Even though Jesus repeatedly made it clear that he is not God (or at least not “the Father” who he understood as God), Nicholas and his gang of goons forced out any notion of considering God as “Trinity” as poetic – not literal. And over the years fundamentalists have insisted that “The” Christian view is subscribing to the substitutionary theory of the atonement, reading the Bible literally, rejecting science, believing in a literal hell, a literal virgin birth, and a literal physical resurrection, etc.  To the extent that some Christians are still engaged in telling other Christians how to be proper Christians – insisting on certain “right” ways to think and believe, they are still attacking the Body of Christ, they’re still punching Jesus.

Now, before you think I’m being too harsh – consider the fact that many people are rejecting Christianity these days and the primary reason is because they have bought into the bogus notion that fundamentalist stances and understandings of the faith are what Christianity actually is. If that were the only way to be Christian, I wouldn’t be Christian either. Thank God it isn’t. Thank God for the rise of progressive Christianity.

Thank God for real scholarship which debunks the false myths about Nicholaus. Thank God for St. Nick, for his tangibly putting his faith into action by helping some girls in need, and for calling people to love God and their neighbors through sharing about Jesus of Nazareth – even if that involved conveying some other myths along the way. ; )

p.s., To see a more generous treatment of Nicholaus, see this article that I wrote a few years ago that will smooth the feathers I may’ve ruffled. Yes, he really did do good in the world by helping some impoverished girls as they grew up. As a fellow human, he no doubt had bad days and wasn’t at his best here and there. No one is all bad, and no one is all good. And no one should punch fellow Christians – including Nicholas or Arias. But theologically speaking, “Nicholas” – at least the one spun and recast by contemporary fundamentalists – was a bully who did far more to harm Christianity than to help it (but the myth they tell says more about them than about the real bishop Nicholas of Asia Minor). 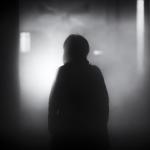 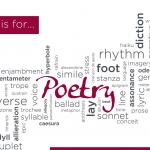 Do You Want to be Healed?
My wife Jeanne and I have been enjoying “The Chosen,” a multi-year...
view all Progressive Christian blogs
Copyright 2008-2021, Patheos. All rights reserved.
error: Content is protected !!