Being Both: The OTHER great book on mixed-belief marriage

I’m working on a few posts about In Faith and In Doubt, my book about relationships between religious and nonreligious partners. But first, I’d like to introduce the other book on mixed-belief relationships that’s well worth reading: Being Both: Embracing Two Religions in One Interfaith Family by Susan Katz Miller. 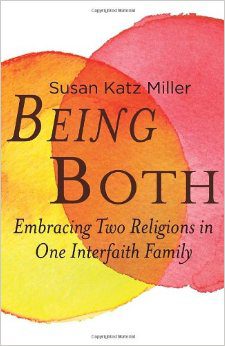 You heard me right: I’ve found exactly one other that I can recommend wholeheartedly. Most of the rest of the oeuvre can fall off the shelf as far as I’m concerned. With rare exceptions, the mixed-belief marriage lit will give you some form of the message that marrying outside of your own belief system is an epic blunder, one that leads inevitably to unhappiness, divorce, and bitter regret.

The fallback position is that interfaith marriages can survive, but only if one partner essentially subsumes his or her identity into that of the other.

This, to put it gently, is codswallop.

Being Both counters both the gloomy outlook and the “pick one” assumption with stats and first-person accounts from couples who have happily and successfully embraced their difference. But it’s not Pollyanna. Miller faces the challenges head-on and describes ways couples have addressed them with varying degrees of success. But it’s the presence of interfaith couples who have succeeded that makes Being Both stand out.

I was married to a Southern Baptist for 13 years. (We’re still married, though she’s no longer religious.) Our marriage was and is a happy one with very little tension or conflict. Sure, we had some disagreements and frustrations around religious questions while she was still a believer, especially once the kids came along, but neither of us has felt anything like “regret” for having married someone with different beliefs, nor felt compelled to surrender to the other’s worldview. And though many mixed-belief couples do encounter serious trouble, I know many others whose mixed-belief marriages are successful and happy.

But the literature almost uniformly focuses on the shipwrecks. Book after book presents interfaith marriage as (to quote some actual passages) a uniformly “regrettable” choice made by starry-eyed young people “who think that love will conquer all” and so ignore the “slow catastrophe” of an interfaith marriage, leading inevitably to “tragic results” including unhappiness, shattered families, and bitter separation and divorce. They tend to include phrases like, “If you’re determined to intermarry…” followed by advice for getting the best out of a terrible situation.

Dig an inch below the surface and it becomes clear what’s going on: many of these authors are clergy trying to prevent the erosion of their own faith communities by attrition and assimilation—something one rabbi recently described to me as “a greater threat to Judaism than anti-Semitism.”

But that same rabbi agreed that we have to accept the reality of interfaith marriage, not construct a fiction to scare people away.

No matter—others are happy to take up the fearmongering cause. A 2010 Washington Post opinion piece by Til Faith Do Us Part author Naomi Schaefer Riley was ominously titled, “Interfaith marriages are rising fast, but they’re failing fast, too”—a statement that’s baldly unsupported.

When you pull back the curtain and clear the smoke, people with different religious perspectives generally have about the same shot at marital happiness as those who share the same religion. One key study concludes that “Theological beliefs and the belief dissimilarity of spouses have little effect on the likelihood of dissolution [of marriage] over time.”

Even Riley herself admits this in a dim corner of a late chapter of her book, saying “When we compare the likelihood that a Christian married to a non-Christian will be divorced to the likelihood that two Christians will be divorced, there is no discernible difference” (p. 120). This relative footnote of fact follows a hundred pages of jeremiads like “Interfaith marriages often come with a heavy price [and] are more likely than same-faith unions to be unhappy.”

It was while looking for refutations of Riley that I found the marvelous blog of Susan Katz Miller and eventually her outstanding, levelheaded book. We bonded over our shared astonishment at the one-sidedness of Riley and the rest of the interfaith literature, and her blog provided valuable ballast for my efforts during the writing of In Faith and In Doubt.

(The biggest mistake I’ve discovered so far in my own book is the unconscionable absence of any mention of the debt I owed Miller’s work. That was pure sloppiness, and she’s been very gracious about it.)

One of the great pleasures of Being Both is that it’s written by a writer—and if you think that’s a tautology, I have a thousand other books for you to read. Miller’s relaxed, clear style is complemented by a clear grounding in research and interviews with actual interfaith couples.

She tackles every major topic, from multiple identity to parenting to rites of passage and religious literacy. The effect of reading a positive take on these challenges after so many agenda-driven naysayers is hard to fully describe.

Miller concludes her book with a point I made in my own: that interfaith families and individuals become “ambassadors of peace” in our culture, increasing the profile and influence not just of their dual perspectives but of the very idea of crossing lines and finding common ground. They embody coexistence in a way that’s hard to match.

So start with mine, which is, you know, wow. But if you’re looking for a thoughtful and fair second opinion on mixed-belief marriage, continue with Being Both.

Order Being Both at Amazon.com

2 responses to “Being Both: The OTHER great book on mixed-belief marriage”