Why I Tell Everyone I Meet That I’m an Atheist

It’s not the first thing I say as I reach out to shake hands with someone new. “Hi. My name is Ali Berman and I’m an atheist.” After all, my atheism isn’t the most interesting thing about me. I’m an author. I work at a fantastic nonprofit teaching kids about human rights, animal protection, and environmental ethics. I like books, movies, rock climbing, traveling, and volunteering. There are plenty of things to talk about that have absolutely nothing to do with whether or not I believe in god.

And yet, when I meet someone for the first time, I make a point to casually mention that I’m an atheist during the conversation, especially if the person I’m speaking to happens to bring up religion. Why? Because in a country that is, at best, suspicious of atheists and, at worst, downright hostile toward them, I feel it’s my duty to be a good ambassador for those of us who don’t believe.

Growing up just north of New York City, no one ever told me that my lack of belief would impact how others viewed me. It wasn’t until I got older that I learned that a large portion of the United States feels strongly that atheists are a real threat to the moral fabric of our country. The Pew Research Center for the People and the Press found that 53 percent of Americans would be less likely to vote for an atheist. Perhaps that’s why we have never had an atheist president nor do we currently have a single (public) atheist member of Congress. Another Pew study found that 77 percent of white Evangelicals would be unhappy if a family member married someone who was an atheist. The same goes for 67 percent of black Protestants, 55 percent of Catholics and 46 percent of white mainline Protestants.

What these studies don’t say is why so many people are opposed to those who identify as atheists. What is so wrong with us that the vast majority of people in the USA don’t like or trust us? The answers probably vary widely, but I think the main issue is that to most people, atheists are wildcards. The only thing that binds us together is that we don’t believe in god. When someone declares that he or she is a Christian, or a Buddhist or a Sikh, there are certain things that person is stating they subscribe to. Rules and doctrines that have been written down and accepted. They can be put in a box, defined. Even googled.

Atheists on the other hand, don’t have that luxury. There is no book of atheism or central figure. No moral absolutes someone can point to and say, this defines all atheists. What kind of friends, mothers, daughters, fathers and sons are we? How are we helping the community? What do we value and what are our ethics?

When I was at a wedding a number of years ago, the groom, a very conservative Christian man, asked me a question when I casually mentioned my atheism, as I’m prone to doing. He looked at me, confused, and said, “Where do you get your morals from?” I laughed, a little taken aback by the question, and replied, “Well, from my parents, from society, and from my own personal moral compass.”

His morals all come from one very specific place. The Bible. Mine, on the other hand, are a patchwork and are constantly evolving as I’m presented with new information. For him to know where I stand on any given issue, I have to tell him. I have to let him get to know me. And getting to know someone takes time.

Of course, not all people who share a religion are identical. Two people who attend the same church can hold entirely opposing points of view on any number of topics including LGBT rights, reproductive rights, the death penalty, and divorce. However, they do wear a label that makes some broad statements about what they believe – who created them, and what will happen when they die for example. My label, my broad statement, simply says that I don’t believe in any of the few thousand deities that have been worshipped throughout history. But it doesn’t say anything else about me, other than maybe, I likely look to science to tell me about the universe and its creation.

If we stripped away all labels like Catholic, Muslim, Jewish, or atheist and simply talked to one another, talked about our thoughts and ethics, I think we’d all find we have more in common than divides us. We’re probably all against murder, theft and exploiting others for personal gain. We probably all want the best for our families and for the planet. I’m not a Buddhist but my philosophies are pretty similar to those of the Dalai Lama. I’m not Catholic, but I can appreciate much of what the new Pope has been doing and saying.

I don’t want to be a wildcard. I really don’t. And that’s why I try to make who I am and what I believe very plain. I want people to see that the fact that I don’t believe in a god has no impact on my ability to be a good and moral person, the kind of person you might want your son or daughter to marry one day. Or who you might vote for for public office. One day I hope that people are judged more on their actions rather than how they believe the universe was created. Because honestly, I don’t care if you’re an atheist or a devout believer. I just hope you are kind. 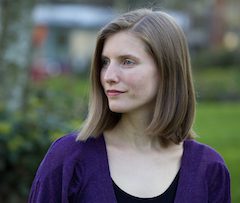 Ali Berman is the author of Misdirected (Seven Stories Press), a novel that follows Ben, a fifteen-year-old atheist from Massachusetts who immediately becomes an outsider after moving to a conservative Christian town in Colorado. Ali is also the author of Choosing a Good Life: Lessons from People Who Have Found Their Place in the World (Hazelden). She works as a humane educator for HEART, helping to educate kids about human rights, animal protection and environmental ethics. Ali was born in England, grew up in New York, and now lives and writes in Portland, OR with her husband and two cats. Twitter: @alijberman

January 23, 2015 Can You Hear Me Now?
Recent Comments
18 Comments | Leave a Comment
Browse Our Archives
Follow Us!

Dr. Fauci Fired And Replaced By...
Laughing in Disbelief
Related posts from The Secular Spectrum