Finding Commonalities Between Nonbelievers and the Devout

Finding Commonalities Between Nonbelievers and the Devout November 8, 2017 Guest Contributor

Religion in America can most simply be divided into two groups — Christians and non-Christians — but that is changing. Americans are becoming less devout, and immigration is bringing new faiths to our country. Atheism is becoming more openly acceptable, particularly among young Americans.

While there has always been a large contingent of people unwilling to claim any specific religious affiliation, outright atheism has for many years been a black sheep to the religious community. Yet ,

The Origin of Faith

Part of the human condition is that we are curious about the world around us. We ask questions and use our intelligence to find answers to those questions, but sometimes we lack the tools to fully reveal why something is the way it is.

Anthropologists who study the development of the human species have put great effort into understanding how early religions developed and why so many of them include certain commonalities —things like the rebirth of a figure central to the religion.

Religion has also, for centuries, played an important societal role in bringing people together to socialize and uniting them under a single cause, for better or for worse.

Religious communities study the Bible and seek ways to develop and strengthen their faith and relationship with God. The scientific community actually does something similar, but in different ways.

Scientists passionately study what sparks their curiosity, even if they don’t always start out with perfectly solid evidence that they’re going to get somewhere. One has to be passionate and have some faith in their theory in order to face the kinds of trials and tribulations that the scientific testing of a theory requires.

You’re probably familiar with the story of Galileo Galilei, who was excommunicated from the church for believing the Earth was not at the center of the universe. If we stop at this story, the difference between religion and atheism seems cut-and-dried. Galileo would have probably enjoyed life far better in today’s world, given that the church today recognizes that the Earth is not at the center of everything.

There was another idea around during Galileo’s time called miasma theory. Miasma was believed to be “bad air” that carried sickness, and it was cited as the cause of the black plague by the medical community of the time. It wasn’t until the late 1800s that this theory was disproven, and doctors discovered that germs were responsible for illness.

As these examples point out, both science and religion have gotten things wrong in the past, and while science and atheism aren’t the same thing, atheists rely heavily on the lack of scientific evidence as proof that there is no god.

But absence of evidence is not evidence of absence. At their core, these two belief systems both rely on a faith in something — that something either being the existence of a deity or the lack thereof. The assumption of faith is that there exists an all-powerful deity who serves a supervisorial role in all of our lives. The assumption of science is that everything has a logical explanation, but that doesn’t mean definitively that there is no god.

On Religion and Politics

In America’s current political climate, another problem arises. Nowadays, more than ever, religious affiliation is frequently automatically attached to a political “side” — with Republicans and conservatives being assumed as Christian and Democrats, liberals and often the scientific community assumed to be atheist.

This becomes highly dangerous in that it is divisive for both parties, and this is another aspect that both groups have in common, but probably don’t realize. Both collections of people are being subjected to stereotyping, often without any kind of meaningful grounds for such expectations.

Take, for example, Lauren Ell, the founding member of the group Republican Atheists. In online interviews, Lauren has cited her reason for starting the site being that she had no home or place for her beliefs. She was ousted by some on the Republican side for being atheist, and actually saw an even more hostile dismissal from the atheist community for her subscription to Republican ideals.

In a country that is at a crossroads as far as what it promotes religiously, this is a serious dilemma. Like it or not, Christianity is no longer the only socially acceptable religion in our country. While it is still quite prominent in the U.S., we’ve taken great strides as a nation to attempt to separate religion and government as much as possible. Religion and politics need not be this interconnected that those who don’t subscribe to the “typical” affiliations of their respective groups be shunned. The separation of church and state exists for a reason, yet we seem to have actually backtracked and forgotten this.

There is malice and stereotyping on both sides. Liberals can be quick to stand on an elitist high-horse when religion comes into play. On the other hand, there are still aspects of the religious community that are old-fashioned and, as such, can be morally questionable as well. One that comes to mind is the trend toward homophobic behaviors in some Christian communities. However, to assume that all Christians are hateful of the LGBT community is just as misled as Christians assuming that all liberals are god-hating antichrists.

The Future for Religion and Science

We come back to the reality that lack of evidence does not equate to lack of existence.

There are specific sectors of science that have, for centuries, attempted to study spirituality and energies beyond what our earth-bound existences can necessarily understand with our current tools and technologies. Future endeavors for these communities, then, will involve keeping an open mind where spirituality is concerned, and continuing to attempt to pass the threshold of the unknown.

The religious community, on the other hand, would do well to keep an open mind too, especially where social and medical issues cross, such as technologies and treatments meant to help transgender citizens to transition effectively. The numbers show that young people are losing interest in the church because of its frequent adherence to outdated ideas of what a devout existence should look like.

Future goals for this community, then, should be focused on bringing youth back into the picture by appealing to the millennial interest to serve their communities and world. Millennials enjoy mission work and view it as an excellent supplement to their education. Joining together with the scientific and health communities to offer initiatives like humanitarian work will certainly give the church a renewed purpose that will hopefully contradict and outweigh some of the negative aspects of the alt-conservative agenda that Christianity tends to get wrapped up in.

An open mind is required for both systems to develop. The scientific crowd tends to be a bit easier to convince than the religious community when there is scientific evidence present. However, recent studies actually suggest the atheist crowd can be just as emotionally attached to their beliefs as the religious crowd can be.

Humility is a value in both the scientific and the religious community, one practiced by the most pious devotees and the most esteemed scientific minds. Sometimes understanding the other side’s perspective just requires taking a moment to consider just how much you really know — for certain. It’s less than you might think.

Kate Harveston is a journalist from Pennsylvania. She enjoys writing about the intersection of faith, politics and culture, and the various ways those elements impact our human experience. If you like her writing, you can visit her blog, Only Slightly Biased. 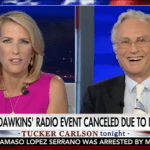 October 30, 2017
The Evolution of Free Speech: From Protecting Minorities to Oppressing Them
Next Post

November 8, 2017 Pardon Me, Religion, I’m Sorry to Bother You: Dispatches on Canadian Secularism
Browse Our Archives
get the latest from
The Secular Spectrum
Sign up for our newsletter
POPULAR AT PATHEOS Nonreligious
1

Russell Moore: Not Really a Hero
Roll to Disbelieve
Related posts from The Secular Spectrum

Pastafarians' 'Old & New Testicle' biblical references make...
LET'S face it: Pastafarianism is as credible as any other religion, so...
view all Nonreligious blogs
Copyright 2008-2021, Patheos. All rights reserved.