I feel a little unkind saying it, because people so fervently need to believe, but chance, not divine intervention, saved a woman from potentially life-threatening gunshot injuries in a recent attack.

Former Sioux Falls, South Dakota, resident Ashely Van Hemert, 32, was shot four times on Jan. 7 at her home in Belgrade, Montana, by Joseph DeWise, the estranged husband of Lauren DeWise, one of her roommates. DeWise, also shot multiple times, was killed in the attack.

Van Hemert was shot in the back of the head and shoulder, and one bullet lodged perilously close to her carotid artery; she was later told she would have quickly bled out and died had the artery been hit. Lucky.

And this is where the magical thinking predictably kicked in for her and everyone around her.

“It is truly a miracle from God that she is alive,” Van Hemert’s sister Carissa DeVries is quoted as saying in an article in the Sioux Falls (SD) Argus Leader newspaper. “That’s what my sister wants people to know, that God breathed life into her. All the doctors said she should not be alive.”

The reporter herself added to the general supernatural vibe by injecting in the article, “Van Hemert is no stranger to using her faith to fight past obstacles.”

Of course, people are free believe whatever they want to believe privately, but when intimations of immortality and divine assistance are reported in a community newspaper, one should hope professional objectivity should preclude casual endorsement of airy speculation.

In fact, God—as far as anyone can truly substantiate—had nothing to do with Van Hemert’s survival. It’s happenstance—pure luck—that the bullet missed her carotid so narrowly, thus saving her life. Furthermore, although she survived, it wasn’t a completely happy ending. Due to her wounds, she suffered a stroke, brain swelling and endured three surgeries, including an emergency craniotomy. Her injuries included fractured rib, shoulder and arm bones, and a punctured lung.

She spent several weeks in intensive care, and afterward could still barely talk. The doctors aren’t certain she will ever walk again.

Still, the faith-infused optimism of her family remains radiant.

“I know God is with her the whole time, from the moment she was on the floor until now,” said Van Hemert’s younger brother Terril, 26. “I know she will walk. I don’t know when or what it looks like, but God has taken her this far.”

Whether or not her family’s belief is valid that a divine hand actually saved the life of Van Hemert, they are undeniably a very loving, close clan. Van Hemert’s mother and brother have been a constant presence at her bedside since the shooting, and her other siblings have regularly shuttled to Montana to check in.

As Van Hemert heals and a homicide case moves forward against the shooter, faith remains her family’s main source of hope and strength—and motivation to forgive.

“We’re asking for more prayers,” Terril said. “Prayer for her and for the siblings and parents, that we can learn what it looks like to forgive and to love.”

It seems callous to be contrary at such a good family’s moment of wrenching trial. Their profound support of Van Hemert is powerful, moving and reassuring to us all that such goodness and familial affection still resides within human beings. But, unfortunately, prayers will not ultimately heal Van Hemert, bring redemption to her assailant or protect someone else in the future from such mindless, needless brutality.

Fate saved this young woman from likely death. And the hands-on love of her faithful family will help her heal. But hard, real-world lessons learned from this atrocity, not magical thinking, will make the world a less dangerous place moving forward.

In my view, whether Van Hemert will walk again is up to chance, modern medicine and her clearly indomitable will. Not Providence.

April 3, 2018
Exploring the Bleeding Borders of the Secular and the Sacred
Next Post 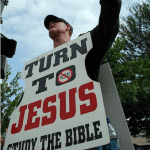 May 7, 2018 Fundamentalist Intolerance
Browse Our Archives
Related posts from The Secular Spectrum