Patriarchal Christians and the so-called “complementarian” male-supremacists of the Neo-Reformed movement are terrified of Rachel Held Evans.

Evans’ new book, A Year of Biblical Womanhood, releases today and, based on the reaction so far, those patriarchal Christians are right to be afraid. It seems the princes of patriarchy may no longer enjoy the enthusiastic support of their subjects.

Here’s just a sampling of the response to Evans’ book.

The concept of “Biblical Womanhood” is something of a sacred cow in contemporary fundamentalism and evangelicalism. Daring to question its prescriptions is akin to heresy in certain circles, and this book has invited a firestorm from those who don’t appreciate questions — or women who won’t toe the line. Rachel has become something of a lightening rod for mean-spirited criticism from some Christians, which puzzles me as I find her writing to be both generous and orthodox.

But God is not honored by infighting, and this book is not intended as ammunition is anyone’s battle. Rachel writes not to fan flames but to loose chains. In exploring her own frustrations with Scripture and Christian culture, Held Evans grows to love the Bible more — and the One who inspired it and sets hearts free.

Rachel has a high view of scripture. Her work is not mockery but an honest and faithful investigation. She illuminates the truth that every person and tradition interprets which makes some folks uncomfortable who prefer to imagine Bible interpretation in easy blacks and whites.

RevGalPals: “A Year of Biblical Womanhood” 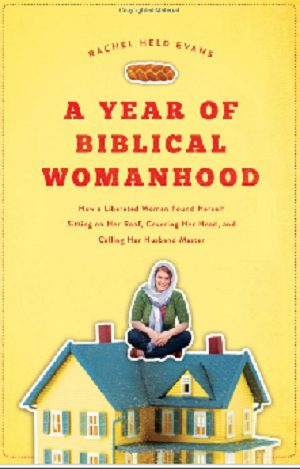 The scholarship in this book reveals many lessons about biblical women and church history that may be ho-hum to clergy of all genders in mainline denominations, but it is likely to be very revelatory to those in the pews around us. Let’s face it: most of us cannot be as loud as the evangelicals around us and Evans’s has done a commendable (and readable) job of making a book suitable for any Bible study- with brief sketches of biblical women, including Eve, Deborah, Tamar, Vashti, Mary of Nazareth, and Lydia, among others.

… Evans’ research is thorough. She consults different Bible translations and has several mentors, including a Jewish woman who gently steers her understanding and interpretation of Hebrew scripture and its intersections of worship and life. … Her projects reveal how quickly an attempt to create, achieve, and perpetuate a biblical standard can leave one frustrated and feeling distanced both from those one loves (and who love one in return) and, possibly, even distanced from God.

… The truth of this book, and of the time in which we are living, is that there are too many negative words and images that surround being female, being feminist, and being honest about one’s own self, one’s body, and one’s experiences. We need all the voices we can raise, lest the rocks do our own work, to say that we are valued, gifted, and powerful creations of God

Before this book is even about womanhood, it is more about what we mean when we say something is “biblical.” And that is perhaps the thing I appreciated the most. She has been having this conversation for a long time on her blog and I hope this book will invite even more people into that conversation.

I will tell you straight up, I liked the book a lot. It is funny, intelligent, disturbing, relatable, and asks some fantastic questions. I highly recommend it.

If you enjoy memoir, want to know more about the Bible (which, as she points out, is not actually “the best place to look for traditional family values”), and have a robust sense of humor, you should check this out.

Sarah Bessey: “In which I call Rachel Held Evans a woman of valor”

The book is a game-changer, a turning point, and it’s a damn good read. Fascinating, funny, erudite, wise, complex, I couldn’t put it down.

One of my favorite sections of the book is the chapter about the Proverbs 31 Woman. Rachel writes about the need to “take back” Proverbs 31 to its original intent – a celebration of women of valor!

Eshet chayil is at its core a blessing – one that was never meant to be earned, but to be given, unconditionally….We abandoned the meaning of the poem by focusing on the specifics, and it became just another impossible standard by which to measure our failures. We turned an anthem into an assignment, a poem into a job description.

Natalie Burris: “‘Me Too’: An Affirmation for Rachel Held Evans”

Growing up as a young woman in the Southern Baptist church, I too experienced the Bible being used as a weapon against me and my calling. I too have been accused of being a “bitter, angry woman” intent on destroying the Church with my “radical feminist agenda.” And I know I’m not alone. That’s why your writing has been such a valuable ministry to women like me (and men, too) who have been wounded by the church and whose questions have been shot down with appeals to concepts such as “inerrancy” and “complementarianism.” I’m sure I’m not the only wanderer who’s been encouraged to return, and who joins the chorus of “Me too!”

Like so many evangelical women, I’ve faced hurtful accusations when I push back against the status quo. Sometimes I don’t have the words or the grace-under-pressure to articulate what I believe. And many other people in the church who are not white straight men fight a similar battle. Thankfully, you do have the ability to speak so clearly when others are still tending to their wounds and can only offer a quiet “Me too.”

I could tell you about the humor and the insight and the grace in the book. The Baby Think It Over electronic doll and the intimate way Rachel lets readers in to her fears and hesitations about motherhood. I could quote some truly beautiful and poignant one-liners.

Even now, there are plenty of people who are more than happy to use the Bible to support continued suppression, oppression, or war in various degrees and forms. There is no doubt that we all, in some form or another, are selective in our reading and application.

So disagree with Rachel’s conclusions if you want, but don’t hate on the book, because this idea, this subject, this discussion about how the Bible should be read and interpreted is one of the most important discussions Christians can facilitate.

And they balk,
“She’s not a person of faith
who loves God and His Good Word.”
They don’t realize they’re seeing you
enjoy
a life of lived-out Scripture.

… Rachel Held Evans grew up in the same culture. She accepted it for a season. And then she also found the questions too big to ignore. So she donned a skirt and a head-covering and set out to see just what it was to be a biblical woman.

And while I was already dipping my toes into the egalitarian waters, Rachel’s journey invited me to dive in.

In her book, she invites all of us, women and men, to dive in.

Ed Cyzewski: “Rachel Held Evans Is Hiding in Your Church”

Here’s the thing that makes someone like Rachel important for the church today: she’s putting into words the very questions and issues that many women (and men) have been asking and thinking about for years but haven’t been able to discuss openly.

… Rachel is one of the most capable voices who is speaking up for gender equality to the broader church. For many women, she has shown them that biblically committed Christians can take the Bible seriously and still live without gender hierarchies.

This is what you’ve done. You listened to us. You shared your space. You told our story. You are changing these lives.

And when the dark nights come and the doubts prevail, I hope you’ll remember the faces of the women of valor you have touched, whose lives are forever impacted because you yourself were a woman of valor to them.

Rachel – thanks for being brave, going first, and opening the door wide behind you for others to join you. You are a gift to us and we cherish you. We also celebrate your latest publication.

Zack Hunt: “A Response to The Gospel Coalition ‘Review’ of A Year of Biblical Womanhood”

I’m still waiting for someone from the complementarian/Neo-Reformed tradition to actually write a review of Rachel’s book and not a theological polemic. Honestly, I might even settle for a decent, rational polemic, but alas, all we get are ridiculous, thinly veiled theological attacks from Desiring God and now from The Gospel Coalition.

Ben Witherington: “Women in the Hood — ‘A Year of Biblical Womanhood’”

Rachel Held Evans has come by her writing awards honestly. There is some fine writing, and some very funny writing in this book, and Rachel herself is often quite transparent and self-effacing about the ways she falls short of any sort of model of a ‘Biblical woman’ as she tells of her adventures in an entertaining and informative way.

kelly escobar: “5 gifts we can give rachel held evens”

we are grateful for you, rachel! congratulations! keep stirring the pot & speaking from your heart & calling the church to something better …