Debates about gun control are raging in the wake of yet another mass shooting.  The issues surrounding these recent shootings are complex, mental illness, a culture shaped by recreational violence and yes, of  course, access to guns. I don’t really want to debate gun control right now; in fact, I’m not opposed to all guns.  What I am opposed to, however, is the fear that drives people to own (and defend the ownership of) guns that are intended for nothing other than the taking of human life.  And this fear is a theological issue that must be addressed among Christians…

I’m laying down a challenge: Someone PLEASE give me a justification for owning semi-automatic weapons, handguns and any other weapon intended for taking human life that is NOT rooted in fear?

Because all I’m hearing in the defense of such weapons is fear — fear of criminals, fear of what someone might do to oneself, one’s family or one’s neighbor.

Where, o where,  is the perfect love that casts out all fear?!??!  Christians, we need to mature, we cannot continue to defend and propagate fear…

There is a wonderful piece by Firmin Debrabander posted on the NY Times website yesterday that is so bold as to name these fears and to note the ways that they are eroding our culture:

“[Guns] pose a monumental challenge to freedom, and particular, the liberty that is the hallmark of any democracy worthy of the name — that is, freedom of speech. Guns do communicate, after all, but in a way that is contrary to free speech aspirations: for, guns chasten speech.  … Like it or not, they transform the bearer, and end the conversation in some fundamental way. They announce that the conversation is not completely unbounded, unfettered and free; there is or can be a limit to negotiation and debate — definitively.”

“Our gun culture promotes a fatal slide into extreme individualism. It fosters a society of atomistic individuals, isolated before power — and one another — and in the aftermath of shootings such as at Newtown, paralyzed with fear. That is not freedom, but quite its opposite.“

A key part of what John and I have been arguing for in Slow Church, is the creation of spaces for open conversation — in churches first and then in the public square — but in order for Christians to lead the way, we need to name our fears and submit them to the love of Christ that casts out all fear.

As long as we continue to live in and propagate fear, that fear will be a roadblock to our maturing into the fullness of Christ.  I don’t have any answers to what should be done about guns in American culture at large, but I do know that we Christians need to stop being driven by fear. 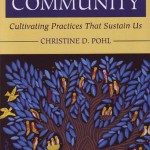 December 12, 2012
Waiting in Expectation for the Transformation of the World [Living Into Community #2]
Next Post

December 18, 2012 Nurturing and Strengthening Gratitude [Living Into Community #3]
Recent Comments
0 | Leave a Comment
"Every normal person wants to help those in need as we can.Church groups have the ..."
Bob Shiloh A Politics of Hope in the ..."
"Hi Abe; Are your mom and dad, Kath' & Tony? If so, then you have ..."
Steev Rush Garrett JPUSA: A Tragic History of Sexual ..."
"https://www.christianbook.c...One of the best books I've ever read!"
Nimblewill Reflecting On The Worst Christian Book ..."
"Yes...but I think you commented in the wrong post. ^^;;"
The Mouse Avenger Remembering Mr. Rogers.
Browse Our Archives
get the latest from
Progressive Christian
Sign up for our newsletter
POPULAR AT PATHEOS Progressive Christian
1