There’s a group of us at Englewood that have been working our way through Alasdair MacIntrye’s important book After Virtue.  Although I first read the book over a decade ago, it has been good to have the opportunity to return to it again, and to realize the ways that Slow Church was profoundly shaped by it.

For instance we recently read this passage from the end of Chapter 5:

Thus the transition to modernity was a transition both in theory and in practice and a single transition at that. It is because the habits of mind engendered by our modern academic curriculum separate out the history of political and social change (studied under one set of rubrics in history departments by one set of scholars) from the history of philosophy (studied under quite a different set of rubrics in philosophy departments by quite another set of scholars) that ideas are endowed with a falsely independent life of their own on the one hand and political and social action is presented as peculiarly mindless on the other. This academic dualism is of course itself the expression of an idea at home almost everywhere in the modern world.  (61, 3rd Ed. Emphasis added).

We hope that Slow Church offers an alternative to the fragmentation that MacIntyre names here, as we have surely felt those divergent forces acting upon us in our churches. “We don’t have time to sit around talking, we’ve just got to do something!”  There is good work for us to do in our local congregations in bringing theological reflection together with real, important action that is rooted in that reflection.

If we try to act without much theological reflection, our actions will end up being guided by the unwritten assumptions that guide the culture at large (e.g., survival of the fittest, the “invisible hand” of the market, individualism, etc.), and our action will not bear witness to the distinctive way of Jesus. On the flip side, if we immerse ourselves primarily in theological reflection and conversation with little or no action, witness similarly breaks down because there is no embodiment in action.  Thankfully, God provides our congregations with people whose gifts lean toward reflection and others whose skills lean toward various kids of action, and the local church community is where the two come and share together and learn from each other, and slowly and conversationally discern a way forward that is attentive to both the theological reflection that drives the action, and the particular gifts, needs and situations with which we must act.

Many of us are shaped by the parallel dualism between church and work life, where the church is about “spiritual” things and work is about “material” things. Submitting ourselves fully, wholistically to the practice of conversation in our local congregations is a way of starting to dissolve this dualism as we allow the theology to shape the work that we do (and how we do it), and also allow our various work experiences to shape our theological interpretation.

We, as churches and individuals, are wounded by the many fragmentations of the modern world, such as the ones described here, but we are convinced that God will heal our broken, fragmented world, and that we are called to bear witness to the ways that God is already at work healing and restoring.  I pray that we will be able to slow down enough to see and hear both the story of what God is doing in history and amidst the real and beloved members of our churches and neighborhoods! 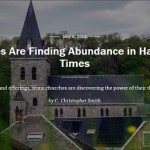 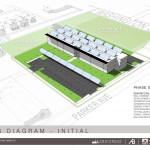