Jastrow on Science, Philosophy, and Theology

Robert Jastrow is one of my favorite agnostic authors on the big questions. As founding director of NASA’s Goddard Institute for Space Studies and a popular author, I’ve very much appreciated his insights on the intersection of science (specifically cosmology), philosophy, and theology. The combination of his knowledge and humility are rare, especially among today’s skeptical scientists who write on these topics (like Lawrence Krauss who wrote A Universe from Nothing).

To Aristotle and Liebniz’s timeless question, “Why is There Something Rather than Nothing?”, Jastrow eloquently paints the picture:

“Consider the enormity of the problem. Science has proved that the universe exploded into being at a certain moment. It asks: What cause produced this effect? Who or what put the matter or energy into the universe? And science cannot answer these questions, because, according to the astronomers, in the first moments of its existence the Universe was compressed to an extraordinary degree, and consumed by the heat of a fire beyond human imagination. The shock of that instant must have destroyed every particle of evidence that could have yielded a clue to the cause of the great explosion.” [1]

In Big Bang Cosmology, the world having a beginning, and the laws of physics breaking down, both bear significant scientific and philosophical (and correspondingly theological for many) pause. Science can only ask (and answer) scientific questions; empirical and verifiable physical facts. For a “First Cause” and “Why Is There Something Rather than Nothing?”, we’re left with the tools of philosophy (reason, metaphysics, etc).

There’s an incredibly important point here missed by many Christian and skeptical thinkers: whether or not the Universe had a beginning is besides the point. Now, Jastrow certainly thought it did, as do many other contemporary scientists, but since Jastrow’s hay day in cosmology, there is now some provocative discussion occurring on Multiverse Theory and models of an infinite universe(s). Interestingly, such models cannot be verified empirically, but reasoned metaphysically, hence a move to such models involve a philosophical endeavor, not a scientific one.

But even if the Universe is infinite, “First Cause” as described by Aristotle (who actually thought the Universe was infinite) is not chronological, but ontological. If the Universe is infinite, what caused it? For those truly willing to face the question, not in a Lawrence Krauss-eque fashion, (as atheist philosopher of science David Albert correctly took Krauss to task for fallaciously redefining the word “nothing” as quantum vacuums, which are of course not “nothing”), the question remains: why were there quantum vacuums rather than nothing? Infinite universe models and quantum vacuums are still something. Back to the persistent and ultimate metaphysical question: “Why is There Something Rather than Nothing?” The terminus of such reasoning, for those with a bend towards philosophical theology, is the idea of God as Pure Act, the UnMoved Mover, the Necessity of which all contingent things depend. This metaphysical conception of God lies at the heart of natural theology, and will remain a timeless theme, as the universe having a beginning is irrelevant to the ultimate question of why anything exits at all.

“For the scientist who has lived by his faith in the power of reason, the story ends like a bad dream. He has scaled the mountains of ignorance; he is about to conquer the highest peak; as he pulls himself over the final rock, he is greeted by a band of theologians who have been sitting there for centuries.” [2] 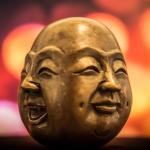 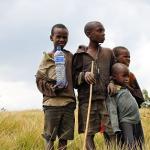 November 17, 2017 A Picture of Redemption in Blood Diamond
Recent Comments
0 | Leave a Comment
Browse Our Archives
Follow Us!

I loved Netflix Messiah. You might...
Brad Jersak
Related posts from Soapbox Redemption