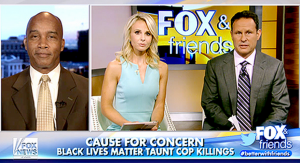 Elisabeth Hasselbeck has been the target of liberal outrage this week following comments she made in response to Black Lives Matter protestor’s who chanted “Fry ’em like bacon! Pigs in a blanket!” at policemen in St. Paul earlier this week.

Hasselbeck asked, “Kevin, why has the Black Lives Matter movement not been classified yet as a hate group? I mean, how much more has to go in this direction before someone actually labels it as such?”

Jackson answered, “Well they should do it, but unfortunately it’s being financed by the leftists. Ironically it’s people who have nothing, really no concern at all about black lives. People like George Soros.”

Liberals are always quick to label and list conservative and Christian organizations as hate groups if one of those groups’ members’ uncle’s cousin’s baby’s mama’s hairdresser’s fourth cousin’s mailman attempts a violent act or posts violent threats on social media.

But now, the left is predictably in an uproar when questions are asked concerning whether these same rules should apply to progressive groups such as Black Lives Matter.

No one is questioning whether Black lives truly matter.  As I have written before, of course they do, because ALL lives matter. That’s not what this debate is about. This debate is about whether the same rules should be applied to all sides in our political debate and discourse.

One side says the rules should be the same for anyone spewing violence and hatred.  The other side wants to call anyone who disagrees with them a hate group, while claiming bigotry when someone else has – gasp – the GALL to apply those same rules to all sides equally.

The truth is this: The Black Lives Matter crowd invites racism and violence… Especially against the very people who risk their lives everyday to protect us.  I’m glad that Hasselbeck had the guts to call them out. 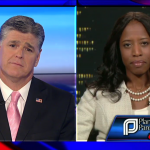 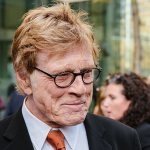 September 3, 2015 Read What Robert Redford Said About Trump
Recent Comments
8 Comments | Leave a Comment
Browse Our Archives
get the latest from
Politics Red
Sign up for our newsletter
POPULAR AT PATHEOS Politics Red
1