Biblical Support for the Pope 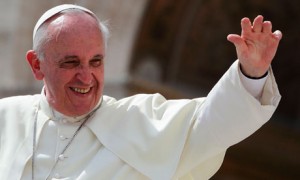 In a world where everybody seems to have the questions, but nobody dares to have an answer, Catholics believe they do have a source for some answers. We believe Jesus had authority directly from his Father to teach the truth, and that he gave some of that authority to his apostles. Catholics believe their bishops are the successors to the Apostles and that they speak with apostolic authority.

The leader of the bishops is the Bishop of Rome—the Pope. To understand the role of the Pope we first have to see what the New Testament teaches about the apostles themselves. Once we see what the apostles were called to do, we’ll see what Peter and his successors are meant to be and do.

The whole thing starts with Jesus. All Christians agree that Jesus was God’s Son. He was sent to earth by God to do his will and show us what God is like. Like an ambassador or a crown prince, he came bearing the authority and power of his father, the king. In John’s gospel Jesus says, ‘What I have spoken I have heard from my Father, and he who sent me is always with me and what I do pleases him.’ Jesus was sent by God, and the word ‘apostle’ means ‘sent one’, so Jesus–if you like–was God’s apostle.
So he could fulfil his mission on earth God gave Jesus power and authority. So in Matthew 28.18 Jesus says of himself, ‘All authority in heaven and on earth has been given to me.’ and in John chapter eight Jesus says that his authority and teaching are from God. Paul recognises Jesus’ divine authority as well; in Colossians 1.15-19 he says Jesus is ‘the image of the invisible God’ and that in him God was pleased for all his fullness and creative power to dwell,’ and in Ephesians 1.22 Paul says God has placed all things under his feet.

So Jesus exercises God’s own authority and power on earth to forgive sins, to overcome evil and to teach the truth. Now here is the amazing thing–Jesus was given this authority by God and in the gospels Jesus goes on to send twelve men in the same way. In Matthew 10.5 and 40 Jesus sends out the twelve saying, ‘He who receives you receives me, and he who receives me receives the one who sent me.’ After his resurrection in John’s gospel, Jesus tells the apostles –‘ Just as God has sent me–even so I am sending you.’ Just as God gave Jesus power and authority to do the job, so Jesus gives these ‘sent ones’ the power and authority to do the very same three things which he himself had authority and power to do.

In John 20.23 Jesus breathes on his apostles and says, ‘Receive the Holy Spirit–if you forgive the sins of any they are forgiven, if you do not forgive them they are not forgiven.’ So Jesus shares with his apostles his own authority to forgive sins. He also gives them his authority over evil. In Matthew 10.1 he calls his twelve apostles and gives them authority to drive out evil spirits and heal every kind of illness. Finally, in Matthew 28.18-20 he gives them the authority to go out into all the world and teach the truth. Then he promises to be with them to the end of the age.

Its important to see in these passages that Jesus did not give this authority and power to all his disciples. He only gave the authority to do these things to his twelve specially chosen apostles. So God’s plan was for Jesus to bear authority on earth– to forgive sins, overcome evil and teach the truth; then just as Jesus was commissioned by God, so he commissions twelve apostles to be his agents in the world, to bear his own divine authority to forgive sins, overcome evil and teach the truth.
The apostles then passed that same authority on to their successors in the faith. They did this through the laying on of hands–or ordination. So Paul says to Timothy–his son in the faith–‘do not neglect the gift you were given through the laying on of hands.’ This authority which the twelve apostles passed on was for the same three tasks they had been given by Jesus himself. In the New Testament we can see the successors of the apostles going on to do the same three acts of power which the apostles themselves were empowered to do by Jesus himself. So in I Timothy 4.11 Paul reminds Timothy that he was ordained to teach the truth. James 5.14-16 tells us that the elders of the church were called to exercise healing and the forgiveness of sins, and I Timothy 1.3-4 Paul commanding Timothy to take authority over the evil false teachers.

We have some very ancient non-Biblical writings by the first generation of Christians–men who had been taught by the apostles. The next generation after the apostles universally acknowledged that their church leaders– who the New Testament calls elders or bishops–are in the position of leadership because they received authority from the apostles. Just one quotation from an early church writer will have to do. Ignatius was a church leader in Antioch–the city where the believers were first called Christians. In fact he probably knew John and Peter when they ministered in Antioch. Ignatius travelled to Rome where he was eventually martyred in the year 108–just forty years after Peter and Paul were martyred in Rome. On his way Ignatius wrote seven letters to different churches. In each one he stresses how important it is for the Christians to obey their leaders since they hold the authority of the apostles. So to the church at Magnesia he says, ‘Just as the Lord did nothing without the Father either by himself or by means of his apostles, so you must do nothing without the approval of the bishop and elders.’ For Ignatius as for all the early Christians, the elders–that is the bishops– have the authority to forgive sins, overcome evil and teach the truth because they were given that supernatural authority from the apostles, who in turn had received it from the Lord himself.

Furthermore, just as the bishops received the authority from the apostles, so they continued to hand that authority on to the ones who came after them. Jesus had promised that he would be with his church to the end of time, and this is the way his authority was to be continued. So Catholics believe that this divinely appointed distribution of authority has continued down through the ages to the present day–you can actually trace the link historically. Therefore Catholics believe their bishops–just like the bishops in the New Testament– are a real, dynamic and Spirit-filled link with the apostles–the sent ones of Jesus. People talk about wanting to belong to the New Testament church–if what Catholics believe is true, then the Catholic church is the New Testament Church alive today.

What about Peter? Did he have any special role among these twelve apostles? Continue Reading