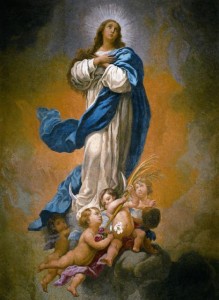 This is a chapter from my book Mary-A Catholic-Evangelical Debate written with David Gustafson.

Dwight: I expect the Catholic doctrine that is most objectionable to Evangelicals is Mary’s Immaculate Conception.  However, since our aim is to approach our differences directly, I’ll state it right up front: Catholics believe that Mary was sinless from the moment of her conception through to the end of her earthly life.  Or, as the doctrine was officially defined:

the most Blessed Virgin Mary was, from the first moment of her conception, by the singular grace and privilege of almighty God and in view of the merits of Jesus Christ the Savior of the human race, preserved immune from all stain of original sin….

We admit that this doctrine is not stated explicitly in the Scriptures. Does that fact end the matter for Evangelicals?

David: Well, we’re a little more nuanced than that.  It’s true that our first question is always, “What does the Bible say?”  Cardinal Newman himself acknowledged that “No one can add to revelation.  That was given once for all.”

(Evidently he alludes to Jude 3–“the faith that was once for all entrusted to the saints”.)  If a supposed doctrine is not actually within the sacred “deposit” entrusted by the Apostles to the Church (1 Tim. 6:20; 2 Tim. 1:14, 2:2), then it is not an authentic part of the Christian Faith.

However, we don’t expect a Catholic to put on Sola Scriptura, Bible-only blinders.  Instead, you’ll make the point that even the oral teaching of the Apostles was authoritative (1 Thess. 2:13) and was handed down as such (2 Thess. 2:15); and if there’s evidence that a doctrine was taught orally by the Apostles, you’ll argue forcefully that such a doctrine commands our assent.  Moreover, you’ll argue that even truths implicit in the Apostles’ teaching are a part of the Faith.  (Cardinal Newman explained that, “as time goes on, what was given once for all is understood more and more clearly”.)   For example, neither the doctrine of the Trinity

is explicitly taught in the New Testament, but each of these doctrines is a synthesis of what the Apostles certainly did teach.  Thus, these theological and Christological truths do indeed command our assent.

Dwight: I want to consider what the Bible says, but I also want to explain how we actually think of Mary’s perfection, and how it fits in with the whole plan of redemption. That way, even if our Evangelical readers still disagree with this doctrine, they will at least understand what it is they disagree with.

In previous chapters I’ve tried to show how the fact that Mary was a virgin indicates her character, and not just a lack of sexual experience. When the early Church taught that she was a virgin for her whole life, they were saying that Mary’s special God-given purity included a wholeness that permeated Mary’s whole being. By the end of the second century Mary was referred to as “all holy.”

This does not mean that Mary was seen as some sort of goddess or superwoman. Instead, by God’s grace, she was a completely fulfilled and whole human being.

So we believe Mary was perfect, but not in the same way Jesus was. His was the total perfection of God made flesh. Mary’s perfection is the wholeness of humanity preserved in its original innocence by the redemption of Christ. We agree, don’t we, that sin is a twist in our human nature? It is a lack in our lives. Because of sin, the glory of God’s image is depleted in us. (Romans 3:23) Another way of saying this is that, in our sinful condition, we lack God’s grace.

This was not so with Mary. Rather than lacking God’s grace, Mary was “full of grace.” (Luke 1:24.) Modern versions translate this phrase “highly favored one”, but the Greek word is kecharitomene, a form of the verb charitoo. The root is charis, the word translated “grace” in the New Testament– and kecharitomene, which indicates a fullness or perfection of grace, can be paraphrased “completely, perfectly, enduringly endowed with grace.”

If a person is completely, perfectly and enduringly endowed with grace, then sin, which is an emptiness or distortion in human nature, would be absent.

David: You infer quite a lot from “full of grace”.  The Catholic Encyclopedia, however, admits that “kecharitomene … serves only as an illustration, not as a proof of” the Immaculate Conception.  In fact, every forgiven sinner has received “the riches of God’s grace”, which God “has freely given us” and indeed has “lavished on us” (Eph. 1:6-8),

but this is no indication of sinlessness; rather, we receive grace precisely because we are sinners.  If someone is said to be full of God’s grace, this is not a description of her virtues.  It is a comment on the graciousness of God, and not praise to the recipient.

Dwight: I agree. Mary’s grace-full status glorifies God, not Mary. Mary says this too, when she sings, “The Mighty One has done great things for me.” (Luke 1:49)

This particular form (kecharitomene) is used only once in the New Testament–in this reference to Mary. Furthermore, the grammatical construction of the angel’s greeting means that kecharitomene is actually used as a name for Mary. This is similar to God giving Abram a new name meaning “Father of Nations” and Jesus calling Simon, “Peter the Rock.” We know that when God gives people a new name he is emphasizing their character and the role they have to play in the drama of redemption.

It is vital to understand that this grace was in no way Mary’s own merit. She shared in the guilt of original sin (though not the “stain”) and needed Christ’s redemption. We believe in Mary’s case Christ’s redemption worked backwards through time as it did for the Old Testament men and women of faith. Continue Reading