Explaining Mary Redemptrix to an Evangelical 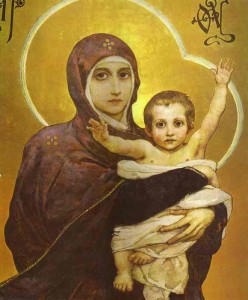 My first personal encounter with the Blessed Virgin Mary happened while I was a student at an Evangelical Anglican seminary in England. I had been brought up as an Evangelical and found my way into the Anglican church. There I was preparing for ordination. A Catholic friend who was a Benedictine oblate suggested that I might like to visit a Catholic Benedictine monastery.

While there I told one of the monks that during a time of contemplative prayer I had sensed God’s presence in a very real, but feminine way. The femininity disturbed me because I knew God isn’t feminine. The monk smiled and said, “Don’t worry. That’s not God. It’s the Virgin Mary. She is the Mediatrix. She wants to help you with your prayers and bring you closer to God.”

I was shocked. At the time the Virgin Mary played no part in my devotional life. As a good Evangelical boy I had memorized 1 Timothy 2:5, which says, “There is one mediator between God and man, the man Christ Jesus.” Calling Mary “Mediatrix” confirmed my prejudice that Catholics believe things that contradicted the Bible. It also confirmed my suspicion that Catholics gave Mary an equal status with Jesus.

I put this notion firmly to one side and didn’t consider it again until after I had come into the Catholic Church. This postponement was possible because Mary’s role as co-redeemer and Mediatrix of grace is not a formally defined dogma of the Catholic Church. It remains a pious opinion—a useful devotional and theological way of meditating on Mary. My attention was drawn back to the question however, when I was writing Mary: A Catholic/Evangelical Debate with an old friend who had attended Bob Jones University with me.

A Stick to Beat Us With
I understand how Mary’s titles of Mediatrix and Co-Redemptrix remain one of the sorest points in Evangelical – Catholic discussions. A Protestant who has heard of these titles will use them as a big stick with which to beat Catholics, and it is important to know how best to engage the discussion. Continue Reading