The Devil of Detroit and Caitlyn Jenner

The charges against the Knights Templar remain controversial, but locked within the order were some sort of secrets which were dark.

The history of Baphomet continues to be obscured in sensationalism, rumor, hoaxes and counter rumor, but we should stop and consider the present statue of Baphomet and ask just what is going on.

Here we have people who belong to the Satanic Temple unveiling a nine foot statue of a winged, goat headed, demon who is half man half woman while chanting “Hail Satan!”

The creepiest thing of all is that the statue has the figures of two little children standing at Satan’s knee gazing up at him worshipfully.

The spokesman from the Satanic Temple claims that “Baphomet contains binary elements symbolizing a reconciliation of opposites, emblematic of the willingness to embrace, and even celebrate differences,”

In other words, they believe Satan is the proper image for America’s current passion for total tolerance and the embrace of every kind of weirdness and perversion under the sun… 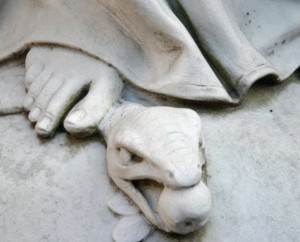 …and our little children are to be indoctrinated into this.

You now know who is behind all the sexual depravity, perversion, confusion and fear in the culture of death.

We should be clear: From the beginning Satan hated  Adam and Eve. He has always hated marriage.

He has always hated men and women, but he especially hates women.

And there is one woman he hates more than any other…

…the one who crushes his head.