The Infant of Prague – Warrior for Our Times 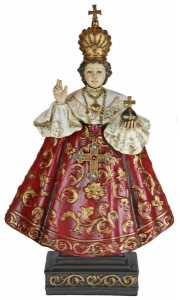 This child is not only the focus of our prayers for spiritual childhood and innocence for ourselves, but it should also be the one we turn to pleading for protection for our own children and for the innocence which is being lost every day to the corrupt morals of our day.

All around us we see children being sexualized–their innocence destroyed, their childhood stolen and their joy exchanged for cynicism and ugliness. Little girls being dressed up as sexy playthings. Middle school boys becoming addicted to pornography, children being treated as designer accessories for vain parents or as sexual playthings for the decadent and corrupt. The Infant of Prague reminds us of Jesus’ own childhood. He grew in wisdom, innocence, confidence and joy. He said, “Let the little children come to me” and “Unless we become like a little child we cannot enter his kingdom.” Therefore this infant king is  a warrior with us against all the things that destroy childhood, innocence, freedom and joy.

There is more to it than that, and this is where the mystery of the church and providence combines to bring every devotion from every age into relevance and importance for the present day.  The Infant of Prague is not just a baby doll. He is revealed as a king. He holds the orb surmounted by the cross– showing that he is king of the Universe and that his cross will conquer the power of this world.

Furthermore, the original image is housed in the Church of Our Lady of Victory in Prague. Our Lady of Victory is the patron not only of the Battle of White Mountain in 1621 through which Prague was returned to Catholicism, but she is also the patron of the victory of the Catholic League at the Battle of Lepanto in 1571 through which the Muslim forces of the Ottoman Empire were turned back from invading Europe and dominating the Mediterranean (and thus the access to the New World)