The Third Fatima Secret: The Truth at Last!

We can now reveal the truth once and for all. On the authority of no less than Emeritus Pope Benedict XVI, this is no more than a rumor. The simple truth is that the third Fatima secret was revealed in full.

A communique issued by the Vatican last week states,

“In this regard, Pope emeritus Benedict XVI declares ‘never to have spoken with Professor Dollinger about Fatima’, clearly affirming that the remarks attributed to Professor Dollinger on the matter ‘are pure inventions, absolutely untrue’, and he confirms decisively that ‘the publication of the  Third Secret of Fatima is complete’.”

Despite this very clear statement you can be sure that Catholic conspiracy theorists will say things like…”The fact that the Vatican wheeled out Emeritus Pope Benedict to make a statement show how desperate they are to continue the cover up!” or “This is exactly what you would expect if there was a cover up…that the Vatican would deny, deny, deny!”

On the other hand we could say that Pope Benedict is not a liar, and the third Fatima prophecy was revealed in full and thank God for what we have learned by living in these terrible times, and take heed because we’re not out of the woods yet and perhaps listen to Pope John Paul II’s advice. In October 1981 when asked about the third secret, he held up his rosary and said, 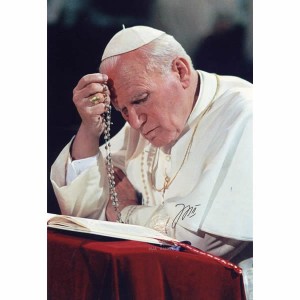 “Here is the remedy against this evil. Pray, pray and ask for nothing else. Put everything in the hands of the Mother of God.” Asked what would happen in the Church, he said: “We must be prepared to undergo great trials in the not-too-distant future; trials that will require us to be ready to give up even our lives, and a total gift of self to Christ and for Christ. Through your prayers and mine, it is possible to alleviate this tribulation, but it is no longer possible to avert it, because it is only in this way that the Church can be effectively renewed. How many times, indeed, has the renewal of the Church been effected in blood? This time, again, it will not be otherwise. We must be strong, … we must entrust ourselves to Christ and to His holy Mother, and we must be attentive, very attentive, to the prayer of the Rosary.

Return to the First Page