Personal Gnosis Is The New Black

Verified or not, I believe personal gnosis is where it’s at.  I’m aware this might spark some dry wood, but I have to speak up in favor of personal experience with the gods over the traditional say-so.

There’s a debate in the pagan community about unverified personal gnosis, or personal interactions with the gods that don’t follow the traditions.  Some people believe the claims, while others prefer a traditional interpretation of the deity.

Here’s an example of personal gnosis: Aphrodite appears to me as a curvy yet toned woman, but to my friend, she’s well-rounded, full of wide hips, big thighs, a beautiful, pillowy belly, and a voluptuous bosom.  This understanding my friend has is rich with personal insight for her.  If you have a similar story, I think we should let people have their beliefs instead of telling them they’re wrong.

My most profound experiences have been with personal gnosis from the gods.  Here are a few reasons why I think personal gnosis, verified or not, is the key to your bliss.

All of the stories from long ago about deities are filtered through the consciousness of someone who had his/her own personal gnosis. Why is his/hers more honored than mine?  In some non-writing cultures, the story was passed on, sometimes for several generations, before it was written down.

2. They were written a long time ago

Okay, let’s say that a deity’s legends arose from a culture and not just one person.  Here’s the problem with that.  With most pagan religions, the stories are several centuries old.  The legends came from a much different time, before even the Industrial Revolution.

That time is probably (just guessing here!) not as liberal concerning women’s rights, gay rights, general equality, and the topic of say, slavery.  Those old stories, however sacred, may have flaws due to the oppressive culture, and you don’t have to accept them.  They may be more indicative of the social norms at that time than they are relevant to today.

3.  Who’s To Say What The Gods Want Different Things For Different People?

My friend who sees Aphrodite with curves for days is empowered by that image.  Even though I see Aphrodite differently, who am I and several other people to take that image away from her?  Maybe it’s her path to experience this vision and live in this manner.

What I’m trying to say is that deities don’t have to be the same deity for me and my friend.  Here’s why I think that — I’m not the same person at work as I am at home or with my friends. Not by a long shot!  Perhaps we could extend a little flexibility to the gods to make their own choices about how they present themselves, what they want people to do, and how they want to interact with people.

4. The Gods Can Change

One day, as I was putting on makeup before work, I received a message from Zeus.  I couldn’t believe he spoke to me.  I’m a goddess-worshipper, a femme spirit to the nth degree, and I’ve never worked with him before.  Needless to say, I was shocked.

I’d thought about him only once over the past year, and that was when the plan of the Greek Gods book came up.  I’d planned on foisting his chapter off on my writing partner. That is, until he spoke.

He told me that he was sorry for all the harm he’d inflicted on others.  It was around the #MeToo movement.  I couldn’t help but wonder if he was called out by a few deities and semi-deities.

He asked me in a polite, earnest manner to write the chapter about him and include his regrets and his heartfelt sentiment.  “It was a different time,” he said.  “I was a different god.”

I realize this is unverified personal gnosis, because it does not agree with the horrific legends of his ‘conquests,’ but this is exactly the type of wild truth we need to heal modern society’s wounds.

Who is to say the gods can’t evolve like we do, year after year?  Maybe they change from time to time to reflect what we humans need.  Maybe they need new legends, and maybe we’re the people who can provide them.

5. If It Empowers You, Awesome

Some of the best pagan minds of our times are pro-UPG. John Beckett, Dver, and the writer of Baring the Aegis all seem to accept UPG, as long as it’s ethical.

Hating on people with personal gnosis is fear-based.  When it comes down to it, if it doesn’t hurt anyone and you’re not trying to make others join in, you’re probably okay.  We don’t need the pagan police for UPG experiences.

That being said, it doesn’t hurt tell people how you received that information.  For example, “I had a dream that …” or “I’ve always felt that…”  This is helpful for all references to deities, not just personal gnosis.

I hope your personal gnosis is rich and helpful, and I personally hope that you share your experiences, verified or not.  I get chills whenever I hear/read about some stories of personal gnosis.  It’s as if the deity is right there with us.  When we share our truths and vulnerabilities, we can become more empowered by them and can empower more people.  It’s a blessing that the gods are so active in our lives, and I, for one, am ever so grateful.

I’ll be sharing my personal gnosis/experience with Hela soon.  Check back in to catch the amazing story.

If your personal gnosis hasn’t happened yet, hang tight.  Do the work, make the offerings, be kind, and have rituals.  Speak with your deities and ask them for insights.  If all else fails, seek outside help from a pagan/witch.

April 19, 2018
Does Our DNA Remember Religious Persecution?
Next Post 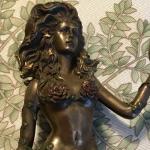 April 22, 2018 Gaia Doesn't Want To Be Represented As A Skinny, Young Woman
Recent Comments
21 Comments | Leave a Comment
"Hello, I'm interested in possibly reprinting this article in a book I am writing about ..."
Rebecca Carter Meeting Baba Yaga
"Eclectic fits for me. It's just like my faith, interfaith. I use what works for ..."
Ivy Is ‘Eclectic’ An Outsider Term? Rethinking ..."
"same, rituals are generally for others in attendance."
MGO731 The Difference Between Witchcraft and Wishcraft
"I have a mirror hanging in one of the windows of my garden house facing ..."
Amanda Ingalls Mirror Magic
Browse Our Archives
Related posts from Starlight Witch