Prophet in the House

“Is there a prophet in the house?”

asked that question in his sermon yesterday, the final day of my second intensive Doctor of Ministry class at Wesley Theological Seminary: Preaching With Prophetic Imagination (Jason is helpfully pictured here so you can imagine him calling us to task from the pulpit in Wesley’s chapel).

I don’t know what you think about such a question, but before this past week I personally would have thought it rather extraneous. Prophets are occasional folk who only come along once a generation or two, right?

But Jason’s question was a great way to end the week, because on Monday our professor Dr. McClain told us that the church needs “prophets who care for their people like pastors and pastors who speak the truth like prophets.”

It was at the very moment he made that statement that I started to suspect there was no getting out of this prophet business.

See, what I’d thought when I walked in to this core curriculum class Monday morning was that I could learn about Preaching With Prophetic Imagination, of course, but I was sure I’d be learning from a detached observer’s point of view. I am, after all, a pastor, not a prophet. I’m more gifted, you see, in nurture than censure. I am a caregiver, not a groundbreaker! Prophets are people like William Sloane Coffin or Martin Luther King, Jr. (Certainly not Amy Butler.)

When I heard what Dr. McClain had to say it sounded to me then that there was going to be no casual observing in class . . . and I was right. In Dr. McClain’s mind, not only was there a prophet in the house, there were 16 of us, and if he had anything to do with it we were going to learn to declare the prophetic word with passion and conviction . . . because that’s what a pastor does: declare the truth like a prophet.

This week has invited me to ask some hard questions about my job as a preacher. Could it be that sometimes “I’m a pastor, not a prophet” really means, “I’m better at preaching feel-good sermons than convicting sermons”? Or might “I’m more gifted in nurture than censure” translate literally: “I prefer to keep as many people happy as I possibly can rather than unnecessarily riling people up from the pulpit”?

Jason challenged the comfortable position I’d lounged in before, reminding me that we learned last week that the prophetic word belongs in every pulpit, declared boldly from the mouth of every preacher . . . even the more pastoral among us.

The problem with this question and its answer is that prophetically preaching the gospel of Jesus Christ is inconvenient, if not totally excruciating from time to time. At the end of the day, though, if we say we’re about preaching a word from the Lord, well, then, inconvenience should be par for the course . . . possibly even excruciating pain, if you think about it. So I’ve been thinking about what it might be that MY congregation needs to hear. What is the word of God for the people of Calvary Baptist Church? I’m listening, listening for God’s Spirit. The trick will be having the guts to pass the message along when it comes.

It’s easy to forget why we do this job in the first place. It’s nice when people like the sermons and everybody feels good. But the gospel of Jesus Christ calls us to task individually and as a community, and it’s the prophet’s job to call the people to the truth.

Seems like Jason’s not the first to ask the question. Paul asked the very same one in his letter to the Romans . . . how will they hear without a preacher? (In other words, SOMEBODY has to step up and tell the truth!)

“Is there a prophet in the house?”

After a week of thinking about this I have to say I hear Paul’s outrage . . . and, yes, Jason, I’m afraid (really, I am!) that there just might be a prophet in the house.

May 22, 2006 How Low Can You Go?
Recent Comments
2 Comments | Leave a Comment
Browse Our Archives
Related posts from Talk with the Preacher 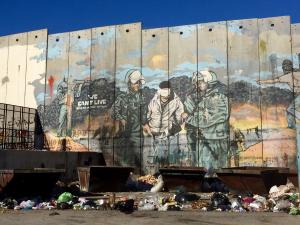