Apollo Is Not A God Of Rationality And Other Facts I Need To Share May 9, 2018 River Enodian

Don’t get me wrong; Carl Jung had a lot of cool ideas and some of them I personally feel have merit. But so much of modern understanding of the Greek gods comes from his notions, and with it a lot of dumbing down, watering down, pigeon-holing, and outright inaccuracies about the gods have come with it. It has stripped them of their many layers, their complexity, and in some cases the depths of their power.

Let me tackle the first one for you: Apollo is not “the god of logic and reason”. Don’t get me wrong; I’m not saying that he’s NOT logical or reasonable and/or doesn’t possess these traits. But they are not the entirety of who he is as a deity, and I feel that this understanding of him ignores, whitewashes, and outright contradicts major elements of him which I find to be both compelling and extremely fascinating. Heck, there’s an entire story where Artemis (or Athena, depending on where you hear the story) flat out calls him out on this, and essentially asks him why he preaches of moderation when he’s so passionate and is constantly chasing skirt (and sometimes the men too!). His response was, “Everything in moderation…including moderation.” Now, THAT’s my god.

And you are all missing out if you’re unfamiliar with him and all of the myriad of things he presides over. Especially since a lot of it is really damned cool and far, far more interesting than most modern books on “archetypes” would have you believe.

Apollo is one of those deities who has a LOT going on. He’s a god of truth, said to be the “right hand of Zeus”, god of the Muses and hence inspiration, associated with archery, science, poetry, writing, music, prophesy, dreams, visions, healing and medicine (the Hippocratic Oath was originally sworn to him in his aspect of physician), theatre (yup, both he and Dionysos share this as many gods share all sorts of traits), averter of evil, purification, agriculture…and a million more. I could fill an entire blog post listing them, and all I’d do is utterly, utterly lose people in the process of trying to describe him to others.

So who is Apollo? He’s a god to whom “nothing in excess” and “everything in moderation” has been attributed to him along with “know thyself” written at Delphi, where the biggest and most renown oracle of the ancient world was dedicated to him and done in honor of him. He’s associated with sunlight and truth, and yet has strong chthonic and underworld associations when you start digging into his more oracular aspects. He’s a god associated with dolphins, lions, crows, and wolves. Apollo’s entire biography screams “I’m complicated” and “I can do pretty much everything and am associated with so much that even modern day writers such as Rick Riordan make jokes about it”.

I connect with Apollo most in his aspect of oracles, divination, visions, dreams, and anything oracular. I credit his influence with my being able to receive such things without having panic attacks–especially in dreams, where any sort of filter tends to go away and it’s a very overwhelming data dump. He’s also my main patron, I’m a priestess of his, and I do a lot of work in honor of him. He was my gateway into Greek polytheism, and I’ve been here ever since.

He has enough crossovers with Dionysos that there are some traditions–mainly modern and how far back some of these ideas go can be in debate–believe that each god is two sides of the same coin. There is definitely an interesting undercurrent to be found with his aspects of shining, light-bringer, and light-bearing. The Romans referred to him as Luciferos and his twin Diana as Lucifera. And as a god who was so widely known, popular, and beloved it made total sense for Christianity to demonize him all the way quite literally and associate him with Lucifer aka “Satan”.

I’ve stated in the past that Dionysos is a witches’ god, but so is Apollo–they just have different things emphasized in their cults and have differing sorts of roles in their respective priesthoods. To dismiss Apollo as “anemic”, “left-brained”, or “rational” utterly ignores all of the numerous aspects and attributes he has had for centuries in regards to both mystical and esoteric pursuits, especially those involving oracles, divination, and anything in the realm of the seer. Both he and Dionysos have their roots and rites in trance possession and worship, the differences between them still remain but the overlaps are undeniable.

In regards to my personal experiences with him: I’ve found him to be warm, very supportive, nurturing, but not super chatty. Some gods will show up in dreams or will even have a bunch of words that string together in a sentence or two in my head and will make sense. If he actually speaks, it’s usually just a few words, seems super clear on the onset…but as time goes on, it turns out what I thought was insanely simple and straightforward had a ridiculous amount of layers of meaning. I once dreamed that he and Hermes were playing practical jokes on me, and Apollo was supplying most if not all of the ideas.

One of the biggest surprises I had upon having both Apollo and Dionysos in my life were the things I had expected from them that were contradicted in experience. Apollo is the one I would describe has having a goofy sense of humor while Dionysos is a god I would describe at times at being deathly, terrifyingly serious. Much of this of course depends on context. Neither of them are always serious, always jovial, always any one thing. I would describe my impressions of the gods as being akin to determining the particular tone of a song or a poem. You feel things, you get impressions, and when you pray and/or do ritual, the feeling is akin to what you get when you listen to music. Not auditory per se, but sensory.

Not all of obvious Apollo as a god of music is my god, right? 😉

I’ve written so much about him in the past, have contributed to devotional anthologies about him, maintain an online temple to him (and a few other gods too), and have an extensive bibliography of additional reading on him on my Hellenismos 101 site here. The book about him by Karl Kerenyi on that list remains the best, and it’s the first one that fell into my hands shortly after he came into my life. Also, the article on him at Theoi.com is a good read. 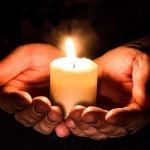 May 9, 2018
Spiritual Purification And Miasma: What It Is And Isn't
Next Post 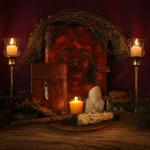 May 10, 2018 How Do I Get In Touch Or Communicate With A God Or Daimon?
Recent Comments
10 Comments | Leave a Comment
Browse Our Archives
get the latest from
Tea Addicted Witch
Sign up for our newsletter
POPULAR AT PATHEOS Pagan
1

Hoodoo How We Do: Psalms Are...
Voodoo Universe
Related posts from Tea Addicted Witch