The Mystery of God’s Own Timing

The Mystery of God’s Own Timing June 7, 2013 Elizabeth Scalia

Yesterday morning my email and twitter feeds were busy with people laughing and saying “he did it again! It’s downright spooky!” while sending me this link to Pope Francis’ homily, which contained many important themes but was particular heavy on the subject of idolatry:

“Idolatry is subtle…we all have our hidden idols” and “the path of life to follow, to not be far from the kingdom of God” involves “discovering our hidden idols.” The Pope pointed out that this attitude is already present in the Bible, in the episode in which Rachel, Jacob’s wife, pretends she is not carrying idols which instead she took from her father’s house and hid in her saddle. Pope Francis said that we too “have hid them in our saddle … But we have to look for them and we have to destroy them,” because to follow God the only path is that of a love based on “loyalty”:

“And loyalty demands we drive out our idols, that we uncover them: they are hidden in our personality, in our way of life. But these are hidden idols mean that we are not faithful in love. The Apostle James, when he says, whoever wants to be a lover of the world makes himself an enemy of God, begins by saying: ‘Adulterers!’. He gives out to us, but with that adjective: adulterers. Why? Because whoever is ‘friend’ of the world is an idolater, is not faithful to the love of God! The path that is not distant, that advances, moves forward in the Kingdom of God, is a path of loyalty which resembles that of married love”.

The joke, continually, is that Pope Francis and I are enjoying an unintended mind-meld, or that we’re secretly cribbing from each other’s work. And yes, I’m having fun with that joke: “me and Pope Francis,” I kid, holding up entwined fingers, “we’re jus’ like dis!”

In interviews about Strange Gods, what I have said, very clumsily, both on the air and in print, is that while my book is just a small thing, and I am a small-time writer, I feel like — especially as Pope Francis’ delivers nearly daily warnings about idolatry, and the dangerous, evil entities to which we become vulnerable when we look away from God — there is something weirdly of-a-piece about all of it. My book is little but the topic is not: remaining open and receptive to God by removing our idols so that he may be unimpeded in his outreach toward us is actually an enormous thing — so big that it is the foundational slab upon which the entire life of faith rests. This is probably why our Holy Father is being so adamant that we understand it.

In the advent of our quickening secularization, a culture where religion and faith are becoming less important as we worldly ones munch away on metaphorical apples of self-interest, it seems like the Holy Spirit wants us to be thinking, and hearing and talking about this; uncovering all of those idols we’ve placed before the Lord (and thus between him and us) and sweeping them aside for the sake of reconnecting with heaven.

He’s got the heavy-hitter in Pope Francis, but the Holy Spirit will often use the most unremarkable of tools to work his will; perhaps my slender volume is meant to be a kind of experiential, seek-and-destroy primer for our ordinary souls: Idol-smashing for Dummies!

What is interesting to me, though — the lesson I took away from all of those jokes yesterday morning — was that if this it is in even the smallest way true that the Holy Spirit wants us to be talking about idols right now, and that the book is a small part of it, then the writer’s block I suffered through had a purpose I could not have guessed.

A good reminder, again, that we ought to give thanks in all circumstances. Betsy Ten Boom made her sister Corrie give thanks for the fleas in their barracks at Ravensbruck Concentration Camp, and they later discovered that it was the fleas that gave them a measure of freedom; for fear of them, the guards tried never to come into the building. My writer’s block delayed the manuscript, only to see Strange Gods released at a time when our new pope is talking seriously about…strange gods.

This can only be a lesson that all things occur in God’s good time; God’s perfect, “providential” timing, which has nothing to do with our own ideas**. We know that all things work to God’s purpose, and his purpose is always to the good, even if the “good” that is being effected in this moment will happen twenty years down the road and perhaps be meant for another — wholly disconnected to us, by then.

It’s worth pondering and praying on: in the times in our lives when we want something, work for it, plan for it and then seen it all get changed or thwarted, how ready are we to kiss it all up to God — releasing it to him with a weary “thank you” — and trust that he moves in mysterious ways, and that even if we can’t imagine it on this side of heaven (and sometimes we simply cannot!), “all shall be well, and all shall be well, and all manner of things shall be well…” 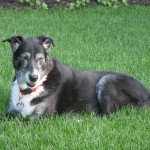 June 7, 2013 Like God, a Dog is Crazy, Open, Runs-to-You Love
Browse Our Archives
get the latest from
Catholic
Sign up for our newsletter
POPULAR AT PATHEOS Catholic
1