US Bank “Blessing” Brouhaha; Not a Hill to Die On? – UPDATE 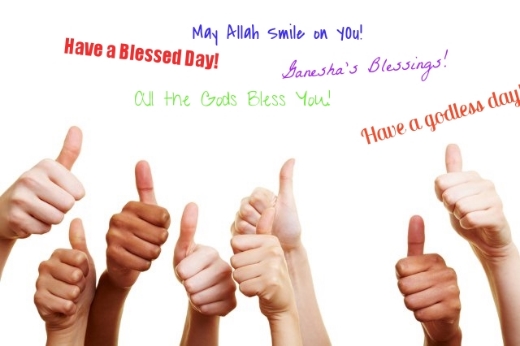 Over at Kathy Shiffer’s place, she links to a story about a woman who goes beyond “Have a Nice Day!” and is suing US Bank, for her “right” to do so.

Except, from the story at Christian Today, it kinda sounds like this woman was making a pest of herself and her faith, not merely wishing blessings but putting people on the spot, too:

The former Walton branch employee had worked for the bank for over 20 years. She said that she started saying “have a blessed day” to all of her customers beginning in 2009.

“I don’t think there’s any better kind of day you can have than a blessed day,” she told Fox News.

In 2011, she was told to stop wishing customers a blessed day and was issued a Code of Ethics violation.

“Effective immediately you will no longer discuss the subject of faith or religion with customers and co-workers alike,” the notice read.

The reprimand also alleged that Neace asked a customer: “Did you take the Lord’s name in vain?” and began talking to the customer about Jesus.

Months later she was written up again after a customer wished her a blessed day and she replied: “Thank you, God bless you too.”

Soon after, Neace reportedly complained about a situation at the bank and then joked with her supervisor about going back to saying “have a blessed day” and getting fired. A day after that, Neace was fired by the bank.

Her attorney, Jeff Blankenship, said that U.S. Bank’s actions were a violation of her First Amendment rights.

Cue the Christian outrage: “It’s intolerance against Christians, that’s what it is!” And “this is genuine persecution!” (seriously?) And “I will never step foot in a US Bank again, that’s what I’m going to do!” Words to that effect abound in comboxes and social media threads.

Is this really the hill some U.S. Christians want to die on, though? That someone in a place of business is not being allowed to wish people “a blessed day”?

If so, are these same Christians going to take it well, when a cheerful bank teller ends a transaction with a Wiccan “Blessed Be!” (or the Gaelic “beannacht ort” preferred by some); will they be fine hearing a religious Pagan say “May the gods bless you!” or “May Hecate have your back!” as they conclude their deposit? Will they be okay with “May Allah smile upon you” at the drive-through or with hearing a cheerfully atheistic, “Enjoy your godless day!”

This all puts me in mind of Saint Therese, who was fervent in her faith but often as not blessed others by interiorly lifting them up to God in secret, keeping it between God and herself, as it were. This quiet act of asking the Lord to bestow a blessing upon the other would become, then, an intimate exchange between the Bridegroom and the Beloved — quite possibly a more efficacious prayer than one spoken in a business setting, where its reception may be uncertain, or even unwelcome.

Offering a blessing interiorly would certainly keep it real and prevent it from becoming as trite, automatic, mindless and meaningless as “Have a Nice Day!” And too, an interior offering seems to me an altogether more loving, courteous and grace-filled way to bless another because it doesn’t put them on the spot; it does not risk making someone feel awkward, or forced to respond in kind when doing so might not conform to either their nature, or their faith, and thus lead them into an occasion of sin.

This bank teller said, “I don’t think there’s any better kind of day you can have than a blessed day.” Well, neither do I, and a world where everyone is constantly offering blessings, or good wishes, or positive feelings to each other from their religious perspectives actually sounds like it could be a good thing, doesn’t it? Bring on the blessings from Jesus, and from Muhammed and the Goddess and the Buddha and Kwan Yin, because people actively blessing each other are not people actively warring against each other, after all, yes?

But how to then deal with, say, a satanist smilingly wishing something upon you while calling evil “good”?

Personally, I don’t need my bank teller to orally bless me, or to ask me to declare myself, or to openly speculate on my sinfulness, gauge the state of my soul or pleasantly proselytize me in any way while I’m trying to make a deposit. If she were to silently ask the Lord to bless me, however, I can only imagine that the Lord would bless her, in return, for the generosity of her spirit, for she would be doing exactly as Jesus had taught: making her prayer in secret, without drawing any attention at all to herself, or in anyway showcasing her own holiness.

Saint Catherine of Siena wrote about the “interior cell” — the “room” she created within herself for intimate prayer between herself and heaven. Saint Teresa of Avila, too, wrote of the “interior castle” within which the most intimate and far-reaching prayer would find voice.

We have plenty of opportunities, throughout the day, to pray for each other, to ask God’s blessings upon each other, and no one ever has to hear about it when we do. All prayer resonates and rebounds. You cast a quiet prayer out to God, and like a pebble upon the waters, it ripples outward in silence, touching places one cannot see. If you really want to bless someone, then whether your place of business says you may do so orally or not is completely irrelevant.

If all of this sounds like I am “urging defeat in the face of persecution”, read John Allen’s stark reality on the global war on Christians, and consider what real persecution looks like. It may be coming, yes. But maybe sometimes, a bank transaction in a pluralistic society is not the place to look for it.

And if it is coming, then perhaps American Christians need to explore the subversive freedom (and great power) that comes from prayer offered completely unbeknownst to anyone but the soul itself, and the Creator. If we fear a future where open prayer will be oppressed, we’d better tidy up our interior cells, in preparation. That will require silence. And practice. 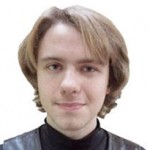 July 8, 2014
The Sickly Anchoress, Getting an Assist from Ireland
Next Post

July 9, 2014 Outwitting the Language Assassins (SYNOD)
Browse Our Archives
get the latest from
Catholic
Sign up for our newsletter
POPULAR AT PATHEOS Catholic
1