In different ways, a few Patheos Catholic bloggers have been talking about poverty, and from a personal point of view, and all unplanned.

It started off with Rebecca Lane Frech thinking back on the paradoxical freedoms and intimacies that came with being short of money, when she and her family had to lean on others, who in turn leaned on them:

When we were poor, we shared and there was a joy in sharing. I can remember the phone calls to my friend S where I would say “Payday is tomorrow and I don’t know what we’re doing for lunch. I have a jar of peanut butter, a banana, and a handful of grapes..not even enough grapes for a snack.” To which she would reply, “I have a loaf of bread and an apple. Wanna come over for sandwiches and fruit salad?” And I would, and we ate pretty well. An unexpected windfall of $20 meant that not only did I get a boost of groceries, but my friend did too. It was a communal pot of good luck, and we shared it. While I do not wish for the bare pantry, I do miss the idea of the safety net of friendship. I knew that there was no way my children would go hungry as long as she had food, and she knew the same. I miss that feeling of camaraderie.

It’s a good, painfully honest look at how prosperity can make us less intimate with God and less dependent upon each other. We may have bigger and nicer living spaces, but they also tend to put us at a distance with both, and even with spouses who managed to be home by 5PM when struggling but — with success — are essentially working, if they are awake. A thoughtful read you’ll want to check out.

Speaking of painful honesty, Simcha Fisher, responding to ideas like this, pretty much broke the internet as she rather fearlessly made an argument against the idea that people on food stamps have no business occasionally experiencing a joyful meal that actually makes them happy:

So there we were, in a dead end town. But we were getting by. I budgeted like a maniac, playing Scrooge with the precious hoard of toilet paper, detergent, and apples we could afford. I once bought a used linen toddler dress for four dollars and blushed the whole way home, nauseated with the extravagance of my purchase. It wasn’t a great way to live, but as long as my husband could get enough overtime hours and WIC kept us in cheese and Kix, and as long as the kids could stomach a rotation of pasta, hot dogs, bananas, and tuna noodle casserole, we were okay.

Now the kids got hot dogs for supper, and the adults got a hot dog bun with ketchup. We figure and figured and figured, and discovered that, no matter how hard we squeezed, we were always going to be about forty dollars short of being able to eat and pay our basic bills. 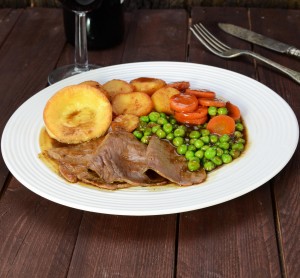 So good, in fact, that it inspired Jen Fitz to ask: Why is everyone so persuaded that buying meat is some kind of luxury for the elite?

This is the point of food stamps. If you want people to subsist on boxes of spaghetti, you don’t need a mechanism to allow for the frequent purchase of fresh food. Meat, vegetables, fruit, butter, eggs . . . There are not two standards of human, deluxe and reduced-for-quick-sale. If it’s allowed in your grocery cart, it’s not a sin for other people to put it in theirs.

Having been poor in my life, while working a full-time job, I know what it’s like to be surviving on a pound of baloney, a loaf of white bread, a tin of tuna, bananas and a box of mac and cheese for the week. Sure, it’s survivable, but after a while dis-spiriting, too.

Fortunately, I was usually able to get a good meal once or twice a week from my future Mother-in-Law, but not everyone who is poor has someone ready to invite them over for roast beef of a Sunday. Someone on food stamps wants to have an occasional steak or fresh fish, and maybe even a dessert, like a human being? I’m not going to tell them “no, that’s for the respectable people who work; you stick to your rice and beans…”

I was the respectable person who worked and sought as much overtime as I could get but whose grocery budget could not withstand the assaults of New York City housing and transportation costs. When people are rolling coins to be able to afford a haircut, and doing the best they can, and you see them buying a flank steak with food stamps, maybe keep your thoughts to yourself and bring something extra for the parish outreach pantry on Sunday — maybe even a luxuriously “expensive” box of cereal for people who usually get the generic cardboard stuff.

We think back on the Depression era and talk about how awful was the poverty and deprivation — and it was very tough. My parents were children who lived through it and yes, they were dirt-poor. But my mother would also talk about how people helped each other. Everyone was in the same boat, working hard where they could, and looking out for each other, too. And looking to God, because people in need tend to do that.

That’s part of that paradox, again, and it makes me wonder if the devil doesn’t find a measure of glee in the wealth-divisions we see in the West.

Read this Facebook post by Leticia Adams. We have been trained to think of prosperity as an unconditional good — but it is a double edged sword, and one of those edges separates us from each other in terrible ways; it destroys inter-dependence upon each other, and it destroys intimacy with God as well.

I disagree with those who say Jesus preached against wealth — he supped with the rich, and clearly didn’t push them out from his presence; he accepted the expensive nard; it was the wealth and connections enjoyed by Joseph of Arimathea that had him down from the cross and placed in a new tomb on Good Friday.

Wealth itself is no sin. I think, though, that when we get wealth, we don’t understand that we’re not supposed to cling to it, but are meant to share it, and joyfully. Wealth itself is not an evil, but attachment to it is. “Love of money is the root of all evil.” (1 Tim 6:10) When prosperity comes, what ruins it is our natural, original-sin-rooted instinct to preserve it, make sure it keeps rolling in.

Then, it become ruinous, both to the individual soul, and to society, because as we lock up all the valuables into our greedy little hearts, we lock out love.

Perhaps the shared deprivations that came with the Depression made neighbors more neighborly — it seems to me my parents said as much — but we live in less intimate times, and barely know our neighbors, anymore. You never know which respectable working person sharing your pew might actually be going hungry.

Related:
What it really means when you have to “try really hard to care about money. 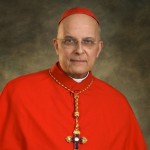 If You Shame A Sex Worker...
Steel Magnificat
Related posts from The Anchoress