In his encyclical, Laudato Si, Pope Francis gets to the heart of the matter in the second paragraph, but most miss it on their way to the cherry-picking:

The violence present in our
hearts, wounded by sin, is also reflected in the
symptoms of sickness evident in the soil, in the
water, in the air and in all forms of life. This is
why the earth herself, burdened and laid waste,
is among the most abandoned and maltreated of
our poor; she “groans in travail” (Rom 8:22). We
have forgotten that we ourselves are dust of the
earth (cf. Gen 2:7); our very bodies are made up of her elements, we breathe her air and we receive
life and refreshment from her waters.

This is the largest and most important point of this long, often beautiful document: humanity’s conflict with itself is the source of ecological disorder.

We are all connected; “intimately united with all that exists.” (LS,11) People might not like to hear it, because the world is increasingly divided, and we love our factions and our grudges, and we don’t want to believe that the “us” of our allegiances have anything in common with the “thems.” Pope Francis immediately tells us that there are no theys and thems. There is just us, created creatures living amid a creation with which we are imbued — a creation that shudders and quakes and shouts out in pain from the actions of a broken humanity.

Nature co-operates with itself and its laws, which are all laws of God’s own intention, and in so doing, it sustains, preserves and perpetuates itself in a way that co-creates with that intention. A bird pecks for food and the action aerates the ground, keeping it alive and receptive; the waters evaporate up to the heavens and return to us fresh and clean, and the earth is softened, and seedlings grow. Nature operates within its sphere, lives as it is intended to live. There is no conflict.

Humanity came to consciousness possessing free will, and with a co-creative aspect, as well. Like the rest of nature — like the blue jay and the soil and the rain — we sustain, preserve and perpetuate ourselves through co-operation with the design of nature. That is, when we are not in conflict with the great ongoing intention of life, born of the very mind of the Creator.

Nature cannot say it is not what it is. A tree cannot insist that it is a flower; a squirrel cannot declare itself a bird and then try to outthink and outsmart nature, in order to compel its co-operation in that direction. Nature is rightly-ordered, it asserts nothing of itself, because it simply is.

Humanity, however, precisely because it is endowed beyond natural instinct and gifted with consciousness, creativity, reason and free-will, is in near-constant conflict with itself. If the birds and worms and earth co-operate easily within the great wholeness of creation, human beings simply cannot. Created in the image and likeness of God, imbued with the spark of God, humanity longs for more; it longs to reunite with that spark, to be forever enclosed within the wholeness of God.

Materially, such an action is — like the hand of Adam, outstretched to the Father — forever beyond the reach of even the strongest human will, and that being the case, humanity fills the empty space of its exile with its own reason and gifts.

The very character of human giftedness, with its conscious observation and sense of self, immediately distinguishes the human animal from the instinct of nature, which — once, more — simply, objectively is; humanity continually prompts an assertion of itself, which is, “I Am”. This assertion initiates an ever-renewed, and deluded, quest for meaning as humanity seeks to become the god of its own generation and creation, an ambition that brings human beings, again and again, first into conflict with the self, and then with others, and finally with the rest of creation.

Within the marvelous wholeness that is derived from the intention of the Oneness that is All-Good, All-Holy, All-Creating, it is always humankind that troubles and disturbs what is perfect.

And yet, humankind is most beloved of the Creator, who condescended to incarnate, and set a tent with humanity, in order to save it from a redundantly enthusiastic pursuit of its own demise.

Creation is alive; we wound it with the sins of greed, sloth, pride, gluttony, envy, wrath, and lust, which are embodied in commerce and industry, and also within ourselves, for these sins lie at the core of our insistence that not only may we move beyond the logic of nature, but that — in honor of our Godspark, which is reason — we must.

God looked at the perfection of created nature and pronounced it “good.” Into perfect nature, mankind, through the agency of ego and conceit, introduces what is unnatural — and pronounces it, “better.”

And when what is natural and perfect must endure what is unnatural and imperfect — whether delivered through chemistry or by explosive brute force, or by social convention — there is a tragic reckoning. Scripture tells us the earth groans; it objects, as it must, because what is natural and pure cannot live in harmony with what is unnatural and impure. The earth roils to be rid of the sin that intrudes upon perfection, and there are the floods and earthquakes and volcanoes, the pestilences and unusual signs and tremors that Christ Jesus himself spoke of.

The troubling changes we see to climate and atmosphere, which have inspired the Holy Father to deliver Laudato Si to the world, do indeed arise from the actions of mankind, but not as many assume. The conventional wisdom wants to call this an indictment against big entities — big commerce, big industry, big oil — but as we see over the course of the document these villains are only the secondary characters; they are by-products of human, deadly sin.

What has the earth trembling upon its axis is the human heart and mind — bored by exile, unsatisfied with the reality of the natural, and endlessly attempting to play at godhood, for its own gratification. This is what Pope Francis is telling us when he asserts that community cannot exist in the unreality of the ether (LS, 103-110), that rejection of God-willed life cannot affirm the very nature we seek to assist (LS, 118-121), and that a confused and conflicted misunderstanding of our own bodies and the dignity inherent within them — ours and everyone else’s — (LS, 154-159) entertains an illusion of power that is in fact an admission of great weakness.

As we see within our own church, what is holy and what is profane may exist within close proximity of each other, but they can never be fully One; there will always be the battle between what is deadly and corrupt coming against what is life-giving and good. The church is even now expressing its anguished moans over the conflict and the destruction that such friction has wrought.

So too, the earth. As long as humanity, serving the muse of gifted reason and ego, insists upon the introduction of unnatural means to achieve its insatiable ends — be they personal or commercial or some amalgam of both — creation will continue to writhe in objection.

If we truly want to be a balm to creation, we must first be humbled to its orderliness, which does abide within us, as well as apart from us. We must cast off the deadly sins which urge us forward, and seek the interior restoration that comes from reconciliation to what is God-ordained, God-created and God-sustained.

The earth is perfect; if we are to live in harmony with it, we too must be perfect, as Christ Jesus urged us: be perfect, as my Father is perfect. Then we will be Holy, and our outreach to God might finally bring us nearer — lifting the hand of Adam ever-so-slightly forward, toward the All-Holy.

We know that for the Incarnation to form, a pristine vessel was needed to contain and bring forth the All-Purity. Laudato Si is an admonishment away from all of our sin, all of our hatreds, all of our conceits, all of our pridefulness, all of our greed, all of our lust and gluttony, all of our self-indulgent wrath, toward what is holy, good and pure.

It is an invitation toward Incarnation.

LarryD: Brace yourself…
Phil Lawler: It’s more provocative and less political than expected
Joan Desmond: Learn to give, and not give up
Deacon Greg: A Brief Roundup of Reactions
Rebecca Hamilton: Breaking it down into small bites
Dr. Greg Popcak: What about the Estrogen in the Water Supply?
Aggie Catholic: 8 Themes of Laudato Si
Simcha Fisher: Big Families Say Laudato Si 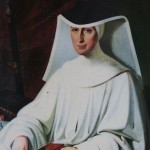 June 19, 2015 A Fun Book Meme for the Weekend!
Recent Comments
1 Comment | Leave a Comment
Browse Our Archives
Related posts from The Anchoress

One response to “Laudato Si: All of our Sin, All of our Hatred on Trial”