Make no mistake about it. Laudato Si is not a wimpy, tip-toe-around-and-don’t-offend-anybody encyclical. It’s a throw-the-money-changers out of the Temple revolution of an encyclical.

A lot of you are going to find yourself challenged by Laudato Si, precisely because Pope Francis does not give you the option of ignoring what he’s saying. You can decide to go against the pope. Or you can decide to walk with him.

But you can’t pretend he didn’t say what he said.

Pope Francis comes right out and says that global warming — along with a lot of other things — is leading us to a dark future. He points out the spiritual hollowness a society whose chief goal is to blindly consume, and whose community has dwindled to the internet. He says that access to life-sustaining water is a human right, and blasts corporatist control of the earth’s riches to the destruction of the poor.

This is a long Encyclical and unpacking it will take a while. But here is my first thought about it. It is a thought based on a memory and a historical fact.

The memory is of a conversation I had with a friend over a decade ago. My friend and I were talking about the universal sins of each time in history, sins that the people of that time are blind to. What we meant was that when a behavior is universally accepted and no one questions it, even great sins can pass unnoticed by the people committing them. Racism was once such a sin here in America.

Later generations often look back and are appalled by the cruelty and ignorance of their forebears. But they are committing their own sins of cultural blindness, even while they express their disdain for their forebears.

I remarked that I thought that one of the things about which future generations would look back at our time and ask “Why didn’t you do something? Were you blind?” was going to be the environment. If we bequeath a ruined earth to our grandchildren, what will they think of us?

The second thing I want to base my reaction on is a historical fact. That fact is simple. The Popes of the 1930s and 1940s did not issue an encyclical against the Nazis. An encyclical was drafted, and from what I’ve read of it, it was a strong and powerful document.

The failure to issue that encyclical was such an appalling failure of the Church that all of Christianity has been paying for it ever since.

Seen in the light of that memory and that history, I can say without equivocation that I am glad beyond glad that Pope Francis has taken the historic step of issuing this encyclical. I know that it is will unsettle a lot of Catholics who have up until now felt comfortable in their political fealties. I know that is painful. Believe me, I’ve been through such pain myself. In fact, I feel a bit of that pain with Laudato Si.

But it is necessary. Among other things, Pope Francis puts down the corporatist-created heresy that our followership of Jesus Christ stops where commerce begins.

Both the right wing and the left wing of our political spectrum want the Church to shut up and go along where their particular sins are concerned. They both claim, each with their own language, that when it comes to their sins, Jesus Christ is irrelevant.

They are both self-serving liars.

By writing this encyclical in such bold terms Pope Francis demonstrates what Hitler managed to keep an earlier pope from demonstrating: That Jesus Christ  is the Lord of all life and that He is never irrelevant, no matter the topic of conversation.

Now, to get to the touchy matter of global warming. What to do with a Pope who does not equivocate when he says that reputable science shows that global warming is, in fact, happening?

First, the Pope does not say this as a matter of morality. He bases his statement on what he terms reputable scientific studies. I am not advocating that anyone drop kick the pope’s opinion on this in favor of Rush Limbaugh’s.

Pope Francis has a scientific background, and more to the point, he has nothing to gain and lot of to lose by making this statement. The talking heads of the world are highly paid mouthpieces who get their money from the people who benefit financially by the public not believing in global warming.

If I had to pick who to believe, it would be Pope Francis without any question. The vicious and totally untrue attacks on Pope Francis’ good name by the minions of the right have convinced me that nothing they have to say about the Catholic Church or our Holy Father is worth hearing. I think they’re all about the money. Their own money.

What Pope Francis does say as a matter of morality is that we have a responsibility to the earth, to all lifeforms and to the poor. This is sound Christian theology. It is the historic understanding of our call as Christians as regards these matters.

We can think — and by that I mean think, not be led around by pundit pied pipers who slander and slime the pope –and let think on matters of scientific investigation. We do have an obligation to think and not just repeat one-sided arguments that are designed to induce us to allow ourselves to be used.

It is important to the max to listen and read widely about an issue as contentious as this. I say that because it is a grave issue. The wanton destruction of entire species and ecosystems, the loss of breathable air and drinkable water, the unnecessary deaths of millions of people to preventable illnesses that are caused by pollution, starvation and thirst are, all of them, intrinsic evils. The rape of the earth is a violation of our first compact with God to have dominion over creation.

We have, as Christians always do, the freedom to think and let think on the particulars of the science of these matters. But we have an absolute moral obligation to approach the question with integrity instead of political sloganeering, from a vantage of concern for the common good, the welfare of the least of these and the provision of a hope and future for the generations who come after us.

We are Christians and we are called to more than to live only for ourselves with no regard for anyone or anything else in all of creation or in the future.

This is my first blush impression of Laudato Si.

I’m going to read it carefully and write about it extensively. I think we may be in the presence of an encyclical as important as Rerum Novarum.

Make no mistake about it folks. Pope Francis is kind, approachable and unassuming. But he is not a wimp.

For other thoughts on the Encyclical, read All of Our Sin, All of Our Hatred, on Trial by the Anchoress,  Reading Francis Through Francis by Kate O’Hare, So Much to Say, So Much to Learn by Kathy Schiffer, Should You Read Laudato Si? by Simcha Fisher, Patriarch Barthelomew on the Encyclical: We Count it a True Blessing, by Deacon Greg Kandra, The Pearl of Great Price by Mark Shea, 3 Sources to Understanding Pope Francis’ Encyclical by Pia Solenni, Laudato Si, Hold Your Breath, Make a Wish, Count to Three by Tom McDonald, Why is THIS Missing from Pope Francis’ Environmental Encyclical? by Dr Greg Popcak. 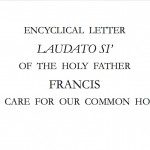 June 18, 2015
You Can Find the Real Encyclical HERE
Next Post

June 18, 2015 Nine People in Charleston are Dead for No Reason. Does Anybody Understand This?
Recent Comments
51 Comments | Leave a Comment
Browse Our Archives
get the latest from
Public Catholic
Sign up for our newsletter
POPULAR AT PATHEOS Catholic
1

Donald Trump is Gone. Now What?
Donald Trump left the White House today. His chaotic, dysfunctional administration is...
view all Catholic blogs
What Are Your Thoughts?leave a comment