How to Lose Friends and Alienate Allies

President Obama gave a pretty important interview last week to a major news channel. You probably didn’t hear about it because the interview was with Israel’s Channel 2 News. More on this below.

Meanwhile, this week the Treasury Secretary of the United State, an Orthodox Jew named Jack Lew, was booed and jeered and heckled by attendees at the annual Jerusalem Post Conference in New York. This happened when he told the audience that the president remains enormously committed to the security of Israel and that “no administration has done more for Israel’s security than this one.”

The Jerusalem Post Conference is a notorious magnet for right-wingers. From Haaretz (itself an attractive source for the left):

It was one of the surliest receptions ever accorded to such a high-ranking administration official by a Jewish audience in the United States. Jerusalem Post editor Steve Linde tried to calm the audience and apologized to Lew. Israeli Minister Yuval Steinitz, who spoke after Lew, said that he was a “true friend of Israel” and that without his help, Israel would never have been accepted to the OECD.

Writing in the Forward, J.J. Golberg reported that Steinitz elaborated on this after the incident:

Speaking later to reporters at a press briefing, Steinitz went further and said, “I do agree that security cooperation between our security apparatuses and our intelligence is better than ever, and there were important upgradings, especially in intelligence, from President Obama.” He said he “felt embarrassed” at the heckling of Lew, “because Jacob Lew is a true friend of Israel. Without him we could not have made it into the OECD,” the alliance of industrialized nations that admitted Israel last year.

“We need to appreciate our friends,” Steinitz continued, “and to hear the reactions in the audience – it was embarrassing.”

Other Israeli officials also told reporters how embarrassing it was. But this is the environment that too many Jewish leaders and their Republican allies have created over the past several years.

So which is it? Is this president a “true friend of Israel” or is he an abominable Jew-hater, determined to destroy the Jewish state? Goldberg points a finger at the Post:

…it might want to consider its role in helping to generate that sort of hostility in the first place, through its publication of a constant stream of vitriolic, over-the-top, ad-hominem attacks on Obama, liberals, peace talks and even Israel’s generals in its regular lineup of incendiary hard-right columnists. There’s only so many times that a newspaper can publish accusations of self-hate, treason and anti-Semitism against fellow Jews, Israelis and Israel’s essential allies before the witches’ brew blows up in our collective face.

He was talking about the Post, but he might as well have been talking to the (so-called) mainstream American Jewish leadership. Back in 2011 I attended a large Jewish Federation event to discuss Israel. Alan Dershowitz was there alongside a whole bunch of congressional reps and senators. When the Dems got up to speak about Obama’s support for Israel, almost the entire room erupted in shouts and insults. Dershowitz made an impassioned plea for civility and bi-partisan love. But like the Jerusalem Post, Dershowitz is part of the problem with his starring role alongside the odious Caroline Glick in the hatchet job documentary, The J Street Challenge.

Now back to the president, spewing his Jew-hating Israel-bashing all over Israeli television:

…if, in fact, we want a Jewish homeland and a Jewish democracy, then this issue of the Palestinian people has to be resolved.

And this is why they abhor him. Jewish democracy? Hah! We don’t need no stinkin’ democracy!

You don’t hear them say that out loud too often, but not too long ago Sheldon Adelson let that little truth slip.

With millions of Palestinians living for almost a half-century as inferior subjects on the other side of the Green Line – while hundreds of thousands of Jews enjoy the rights and privileges of citizenship in that same territory – Israel’s democratic ideals are already fading to black. And all this happens while Israel’s most vocal and obnoxious defenders view the Jewish state through the eyes of Holocaust survivors, demonstrating little consideration for the responsibilities that come with Jewish power and few signs that they internalized the lessons borne on the backs of Jews who suffered through thousands of years of powerlessness.

They oppose the president and defy the world because they’ve made their choice. They want a Jewish homeland. And to hell with democracy. 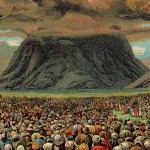 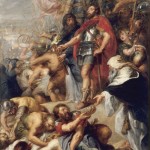