Christian fraud Morris Cerullo is ‘alive and well’ in the arms of Jesus July 12, 2020 Barry Duke

SO said one of his adoring followers after the millionaire ‘miracle cure’ huckster tumbled off his perch yesterday aged 88.

In an oleaginous report of Morris Cerullo’s death, the Christian Post briefly referred to “some controversy” regarding his indictment for failing to report his total income for over three years in the 1990s. Charges in the case were dismissed.

The Independent was far less adoring in 2014 report that suggested that Cerullo, above, was responsible for the death of 25-year-old Audrey Reynolds, who cut back on her epilepsy medication after attending one of the fake healer’s “crusades” in 1992 that promised “some will see miracles for the first time.”

Reynolds joined 80,000 people who went to Cerullo’s eight-day shindig at the Earls Court exhibition centre. Having queued patiently for her chance to meet Cerullo, she took the stage telling the preacher she believed his message of healing power had cured her. Six days later she had an epileptic fit and drowned in her bath.

The inquest into Reynolds’s death heard that only 2.2mg per litre of the lifesaving drug she needed was found in her body  – the dose should have been 7.2mg. Recording a verdict of accidental death, Southwark coroner Sir Montague Levine said:

It is a tragedy that she went to this meeting and thought she was cured of everything. Sadly, it led to her death.

A spokesman for San Diego-based Morris Cerullo World Evangelism (MCWE) called it “a very sad situation” but two weeks later the preacher held a press conference raging at the “total injustice” of being blamed for having any role in Audrey’s death. Referring to Sir Montague’s comments, the televangelist said:

I think it was a mischaracterisation, a total injustice. I think conclusions were drawn too quickly. The coroner did not have evidence of the attitude of the person’s mind and he decided what he thought of the matter,

Cerullo said his crusade to London had been a success and that he had received 746 testimonies from people saying they had been cured of various ailments after attending the rally.

Audrey’s mother, Belzie, was  furious when she learned that the conman planned another “crusade” in the UK. She said:

Cerullo is a dangerous man but I can’t stop him, much as I’d like to. His shows are all about money. I remember when my daughter went there all those years ago looking for hope, believing something might happen. I didn’t go. I watched it on TV and saw there were people with buckets collecting money throughout the event. They are all in it for the money.

Audrey’s story is not the only tragic one associated with Cerullo’s trips to England. Great efforts have been made to remove video footage from the Internet of him “healing” his audience, but some remain.

One video shows him “healing” four-year-old Natalia Barned who suffered a childhood cancer growing just above the kidney. After touching the girl Cerullo asked the Earl’s Court audience to raise their hands and thank God. She died two months later, on August 23, 1992.

At the time Steve Lumbley, from US-based Apostasy Watch, said Cerullo’s website was:

A cornucopia of wild claims and self-aggrandisement. Humble he is not.

When televangelist  and convicted felon Jim Bakker, above, became embroiled in sex and financial scandals in the late 1980s, Cerullo, then worth an estimated $30-million paid $7-million for his Christian TV channel and renamed it The Inspiration Networks.

In April, Bakker said he faced bankruptcy, and in May suffered a stroke. His wife Lori asked for prayers for her husband and for the couple’s ministry.

Cerullo was sued twice in 2000 by employees who said they were fired after raising questions about fundraising. John Paul Warren, a former Senior Executive with MCWE said he confronted Cerullo about “unethical and fraudulent fundraising techniques” in his lawsuit against the organisation.
The lawsuit claimed that Cerullo ill-gotten gains earned him a 1,000 square ft mansion in the exclusive San Diego community of Rancho Santa Fe, and he owned a jet with a gold-plated interior.

A California appeals court said that the courts could not get involved in the case since it involved employment at a religious organisation, and that state involvement would violate constitutional rights. The money continued to pour in.

By 2009, the growing empire enabled Cerullo’s son David, Chief Executive of the network, and his wife Barbara, to build a $4-milliom, 11,000 square ft lakefront home in an exclusive neighbourhood.

The Independent added: But it is Morris Cerullo’s claims of healing that remain the most controversial aspect of Morris Cerullo’s empire. Julian Richards, MCWE’s Europe Director told the newspaper:

I have never come across any false claims of healing in the 16 years I have worked with MCWE. People with cancer, any terminal illness can be healed. There is no condition that God cannot heal. Morris has never claimed he is the healer, it is God that heals. Morris is the conduit. I would invite the sceptics along next week to see for themselves.

Cerullo withdrew from Britain’s Evangelical Alliance, which represents two million evangelicals, in 1996, after the Advertising Standards Authority (ASA) upheld four complaints against him relating false claims that he could miraculously cure the sick and disabled.

Steve Clifford, then General Director of the alliance, said:

Despite the controversy of 22 years ago, he is respected by many in the Christian community and his ministry has been a blessing to hundreds of thousands of Christians across the globe. I do know that many members of the Evangelical Alliance will be going to his meetings in London and will find them a source of support and encouragement to their Christian faith.

In 1991 British authorities suspended the licence of a satellite station for broadcasting Victory with Morris Cerullo. It was reinstated after the station agreed to precede the programme with the disclaimer:

Morris Cerullo World Evangelism cannot substantiate the claims made by those participants featured in this programme.

It advised all persons suffering from illness to seek medical attention.

The following year Cerullo was reportedly expelled from India after near riots broke out at one of his rallies. The San Diego Union Tribune said:

Cerullo worked a crowd of 30,000 – many of them sick – into a frenzy for two hours and then pronounced them cured, prompting many in the crowd to call him a cheat.

In 1999, the Christian Channel was fined £20,000 for breaching advertising codes relating to political impartiality after a complaint about an advert for a Cerullo rally that claimed “Satanic hordes” had:

Occupied the principal palaces of power in Europe.

Cerullo had been due to go to trial in August 2007 on three counts of filing false tax returns that misstated his income by $550,000 between 1998 and 2000. Each count could have carried a maximum penalty of three years in prison and a $100,000 fine. A US District Judge found that grand jury members were not told that a donor’s intent is key to determining whether money given to religious ministers is subject to tax and dismissed the charges.

The charlatan’s family family wrote on Instagram on Saturday:

Today we remember the incredible life of this great man. Your Legacy will live on!

The day before, his family wrote on Facebook about  him being hospitalised:

Dear Friends, we would appreciate your immediate prayers for Dr Cerullo who is being treated for pneumonia at the hospital. Please also pray for Theresa who has been working around the clock to assist in his care. She needs your prayers too for extra strength at this time. Thank you for all your thoughts and prayers for Morris and Theresa!

In December 2016, Cerullo told The Christian Post in an interview that he had battled serious health issues, but had recovered after being bedridden for nearly eight months that year. He said it was God’s healing that restored him after vasculitis, a family of uncommon diseases that feature inflammation of the blood vessels with no known cause, left him unable to move.

This is probably the greatest miracle I’ve ever seen in my life. You know I’ve seen thousands and thousands of people miraculously cured but nothing like this. I was given up by the doctors. I was paralyzed, they had me in a wheelchair for maybe seven, eight months this year. 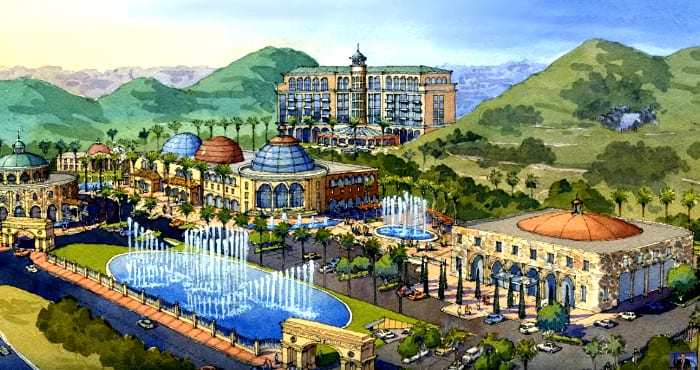 Cerullo’s ministry last year opened a utterless tasteless $190-million biblically-themed resort and conference centre in San Diego called the Legacy International Center which, according to the San Diego Union Tribune was the result of a vision given by The Almighty to the shameless crook. It described the monstrosity as:

Hallelujah, now at last he’s alive and well with his Lord and Saviour forever more … No more tears, pain, sufferings, Covid-19, riots, hatred, hostilities or presidents to put with, Glory to God… No funeral, just a celebration of praise and worship.. PSALM 116: 15 ‘Precious in the sight of the LORD is the death of the Saints’ … Amen.

July 13, 2020 Priest, wrongly accused of stealing £1-m from church, is found dead
Recent Comments
0 | Leave a Comment
Browse Our Archives
get the latest from
Nonreligious
Sign up for our newsletter
POPULAR AT PATHEOS Nonreligious
1