LOONSDAY, August 18, 2020: Televangelist and former jailbird Jim Bakker, 80, is the gift that keep on giving to those of us who love to point and laugh at Christian fundies as they fast come unraveled.

Bakker, above, according to this report, has thrown his lot in with the anti-mask brigade, declaring in a press release that they are “satanic”.

How can you go to church and pray when you’re wearing a mask? Do you think God can hear your prayers through a mask?

Many other fundamentalists preachers have also refused to wear masks in the midst of the coronavirus pandemic.

Greg Locke, above, pastor of Global Vision Bible Church in Tennessee, declared he was “sick of this mask brigade” nonsense in a Facebook video.

We don’t require masks at our church. We probably had 450 people crammed into a tent this weekend. Two people in the whole place had a mask. If they want to wear a mask, that is great, I’m not going to mandate it. As a matter of fact, I discourage it because I think it’s utter nonsense.

And conspiracy nut Chris McDonald claimed wearing a mask could lead to being forced to wear a hijab or a “Gestapo uniform,” according to Right Wing Watch.

A new study by the Journal for the Scientific Study of Religion showed that refusing to wear a mask was a sign of Christian nationalism and distrust of science.

And speaking of conversations with God, Trump yesterday appeared to suggest that COVID-19 was the Almighty’s way of punishing him for being boastful about his handling of the economy before the pandemic.

Burbling on disjointedly at a rally in Mankato, Minnesota, Trump said that he’d created jobs for vast numbers of Americans, even the “dumb” ones, and added:

What we’re doing is nothing short of an economic miracle and now we’re doing it again. We built the greatest economy in the history of the world and now I have to do it again.

The same day Trump described as “horrible & politically charged” a court decision to block a new regulation that would roll back health care protections for transgender people. 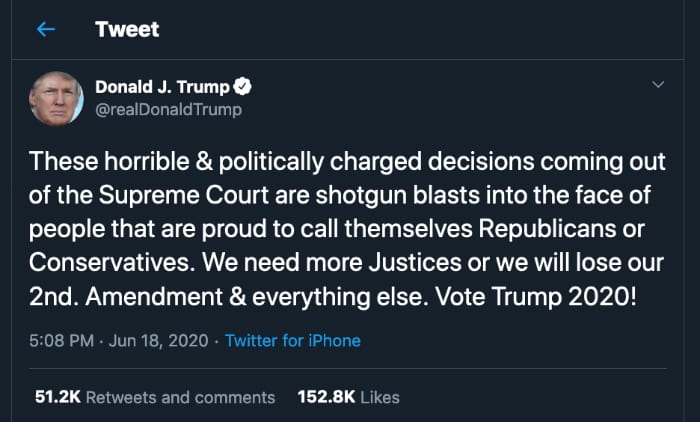 Federal Judge Frederic Block put a halt to the regulation a day before it was due to come into effect today (Tuesday).

He found that the regulation violates the Supreme Court’s landmark ruling that extends federal civil rights law to gay, lesbian and transgender workers.

August 18, 2020 Ex-jailbird Pell: Vatican has swept out 'most, if not all of its crooks'
Recent Comments
0 | Leave a Comment
Browse Our Archives
get the latest from
Nonreligious
Sign up for our newsletter
POPULAR AT PATHEOS Nonreligious
1